The Open Beta is now on, the game is super fun, you guys should play! 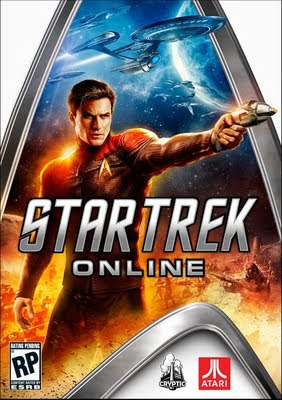 For 80 Bucks you can get the Collector's Edition The DDE comes with:


Play with us!
We have a Fleet up and running but if you want to play with us this really isn't as important as joining the PA Chat Channel is. To do so type this:
/channel_join "Penny Arcade"
The Quote marks are super important, don't forget them

Now some links:
Open Beta Info and where to get Keys
Retail Purchase Options (with pre-order bonuses listed)
Pre-Order Faq

And a Game Summary:

The year is 2409, 30 years after the events of Nemesis, and space is once again becoming a hostile playground. Play as one of two factions; Federation or Klingon, to secure (or or simply explore) your corner of the galaxy.....

From the official word:

Become part of Star Trek®: The Star Trek universe will appear for the first time in a massively multiplayer online game. Everything from the elegant domes of Starfleet Academy to the ancient temples of Vulcan, from the towers of Qo’noS to the Fire Caves of Bajor, from the mysterious Mutara Nebula to the unexplored voids of deep space, all will be represented in stunning 3-D graphics. Immerse yourself in the future of the Trek universe as it moves into the 25th century: a time of shifting alliances and new discoveries.

Adventure in the Final Frontier: Explore strange new worlds, seek out new life and new civilizations in an expanding vast universe. Make contact with alien races, discover resources and uncover mysteries that will change the future of the Star Trek universe.

You Are the Captain: Command your own starship as a Federation Captain or a Klingon Warrior. Outfit it with the systems that you need to make your mark in the galaxy. Customize your ship as you see fit. Recruit, train and mold your crew into an elite force for exploration and combat.

Surface, Shipboard and Deep Space Adventures: Command your vessel in thrilling space battles, or beam down to planets with your away team for face-to-face confrontations. Missions will take you and your friends into space, planetside and even inside starships!

The recommended system specifications are:

Other Things!:
Want This Uniform?

I'm not sure if this was mentioned earlier, but this might help folks with ship selection.[/QUOTE]

«1234567…65»
This discussion has been closed.
Penny Arcade Forums› Games and Technology› MMO Extravaganza
Powered by Vanilla