Registered User regular
August 2011 edited August 2011 in Games and Technology
A lot of you may remember this game: This is not Escape Velocity. This is Terminal Velocity. And okay game in its own right, but not the game I want to talk about.

What do I want to talk about?

Let me paint a picture for you:
The galaxy is big. Governments and corporations are all trying to survive, and slice out a larger piece of the power pie for themselves. Naturally, this means war, espionage, developing technology, piracy, even terraforming and/or destroying worlds. Into this galaxy stroll you. After finally scrounging together enough cash for a brand new shuttlecraft, you launch, and find yourself alone in a very, very big world. Where you go now is completely up to you.

Yes, there are multiple, branching campaigns, that are actually very well written.

But the meat of the game is going out on your own. Escape Velocity was the first sandbox game I played. I'm not saying it was the first, but I will perhaps suggest that when it came out, the market was pretty small. And it blew me away. My neighbor and I would play it as we played Heavy Gear, multiplayer, with either of use controlling different aspects. In this, he was the pilot, doing all the flying, and I the copilot, manning the weapons, communications, etc. We played this endlessly. And that was the shareware version. We couldn't even complete any of the storylines because we never payed for it. But we didn't care.

So what can you do in Escape Velocity: Nova? The sequel to the sequel of the game I just gave such a glowing recommendation?
Obviously you can complete missions. In addition to the (several) main storylines to follow, there are also several minor storylines, and randomly generated missions available from the mission computer on most planets.
(some of the mission computer missions actually lead into storyline missions as well..)
Trade commodities. As you build up your fleet you will gain access to potentially massive amounts of cargo space that you can use to set up trading runs. Be careful though, the more profitable runs tend to have more pirate activity.
Build up your ship and your fleet. You start with a tiny little shuttlecraft, and you will quickly find that you need more cargo space/weapons/shields/hull/energy(gas)/upgrades to do anything. But eventually you may find yourself in a massive ship with several high-powered escorts, destroying everything that looks at you funny.
One of my favorites is to retrofit one of the massive cargo-haulers into a well-armed-and-armored carrier.
Take over planets. Is that outpost refusing to let you land, and constantly harassing you with their defensive fighters? Once you build up enough of a reputation, you can demand their allegiance (they will just laugh at you otherwise). Leave their defenses in tatters and they will not only realize the error of their ways, but they will gladly hand over a portion of their hard-earned credits every solar day so that you might be better able to "protect" them.
Be a pirate. See a ship you like? Disable it and take it over. Naturally if they are in a capital ship with 130-something crew compliment and you are in a little 2-man fighter, the two of you will have a hard time taking them out. But if you've got room on your ship, why not retrofit some of that cargo space into a barracks for your own squad of marines? That should help your chances. Alternately, just take everything that isn't bolted down (cargo, ammo, etc) and sell it at the nearest planet.
Explore, and more. The whole galaxy is out there, there really is a ton for you to do.

Well that's nice, you say, but $30? Really? I think it's probably only worth a third of that.
Ah, well let me just point out that the entirety of the previous two games have been updated to the new, much improved Nova engine and are available for free as mods!
That's right! Escape Velocity, EV:Override, and EV:Nova, for a whopping $30.

Mods, you say? Yep, the entire thing is completely modable. From adding a new system or two to your star-chart, or a new weapon and ship, all the way up to some really ambitious total conversions, there are some very well-done mods out there. 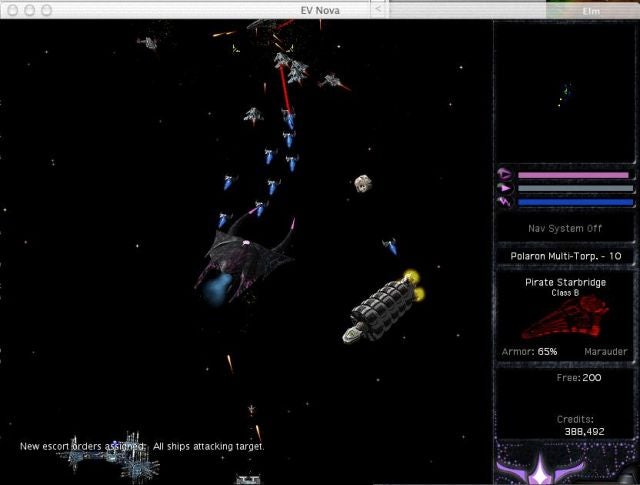