[Sonic &amp; All-Stars Racing Transformed] Is it a...?

TorontoRegistered User regular
May 2012 edited December 2013 in Games and Technology
Woo-hoo! SEGA has announced a sequel to my favorite kart-racing game of all-time!

...sorry, Mario, but ASR just has so much less BS to deal with. Both in racing, and in unlocking things.

IGN, 1UP, and Destructoid all have previews, and here is the announcement trailer: 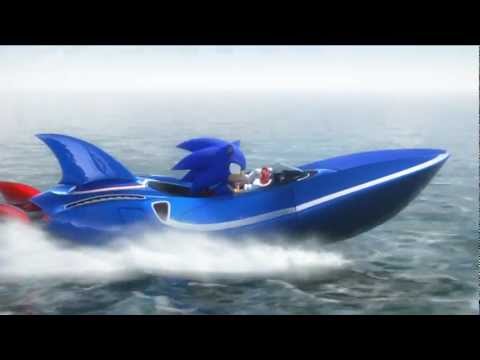 The obvious comparison is to Mario Kart 7, of course, and the developers know it. From IGN:

If the game was unlikely to escape Mario Kart comparisons in the first place, its new central mechanic makes it impossible not to discuss the similarities. As with Mario Kart 7, Transformed doesn't just restrict its vehicles to the track, instead sending them skidding across water and soaring into the sky. Sumo's game had already been conceived before Nintendo's E3 conference, and the developer watched in horror at the airborne and aquatic sequences in the trailer. SEGA had been all but gazumped by its former rival.


Fortunately, according to Destructoid:

Well, the "Transformed" in the subtitle actually has significant meaning. During each race, courses will change their structure after every lap. So, naturally, each character's vehicle morphs into the appropriate form.

In practice, however, the two games play quite differently. In fact Transformed has the edge in one very obvious regard. In Mario Kart 7, plunging beneath the waves made little meaningful difference to how the game played; this was merely a cosmetic change. Similarly, gliding, while more involved than underwater racing, wasn't so much about flying as falling with style. Hit the water here, however, and you'll immediately notice tweaks to the handling – it's closer to something like Hydro Thunder Hurricane than a land-based arcade racer. And on the occasions you zoom above the track, there's a fully-fledged flight model, as you guide your now-winged vehicle through floating boost gates. Better still, there's a brief pause and satisfying mechanical whirrs and clunks as your kart morphs into its new form, in a manner reminiscent of a certain Hasbro toy franchise. Robotniks in disguise, anyone?


Among the new characters are Vyse from Skies of Arcadia and Gilius Thunderhead from Golden Axe. Plus, there's a track based on Panzer Dragoon, which is more air-oriented-- particularly after a creature destroys a wooden bridge you race across in the first lap.

Returns sighted so far are Sonic, Tails, Amy, Knuckles, Eggman, Beat, BD Joe, and AiAi. Sadly, it looks like Eggman no longer has his monster truck.

In fact, I'm not sure if the different vehicle types will be returning, which is unfortunate-- I could really tear up the track as Shadow on his motorcycle.

1UP says of the items:

While the weapons we got to use in the demo were placeholders, Sumo's understanding of Mario Kart's recent follies allowed me to relax quite a bit. Haters of the Mario Kart's ever-growing reliance on rubber-banding nonsense and fickle weaponry can rest easy knowing that Sumo Digital shares in your disdain. Producer Joe Neate lamented the fact that the Mario Kart series continues to cater more to people who have never touched a video game controller and less to fans who have been power-sliding for the past two decades. He assured me that Transformed is a game that rewards skill and knowledge of your environment -- two things that have become less and less important in recent Mario Kart outings.


Frankly, I thought the weapons worked perfectly in the first, certainly when compared to Mario Kart as of late. Certainly nothing like blue shells, lightning bolts, etc. And you don't lose them at every little nudge or drop, either; allows for much more strategy.

All-Star moves are going to work on a meter of some kind, rather than being pick-ups, it would seem. The better you drive, the more it fills.

SEGA Miles are back as well, but it sounds like you'll be putting them into characters to improve them-- I hope that doesn't mean they'll take away your ability to buy new characters/tracks/songs/etc. with them. That was a huge improvement over Mario Kart, in my eyes (especially 7 and its need to be an expert to unlock anyone besides a Mii); I've never unlocked everything in an MK game, but ASR? I have everything.

Wii U? No confirmation yet, but it sounds as though that could change.

Here's hoping that maybe Mario can be in on it this time; Avatars and Banjo (and DLC) are why I went 360 last time, but Mario could turn that all around on this one.