[Day Z] Like a Japanese game show, where the prize is breaking your legs. A 225 km2 open world post-soviet state and one of the areas hit by a new and presently unknown infection which has wiped out most of the world's population. You are one of the few who have survived and now you must search this new wasteland in order to fight for your life against what is left of the indigenous population, now infected with the disease.

Go Solo, team up with friends or take on the world as you choose your path in this brutal and chilling landscape using whatever means you stumble upon to survive.

This is Day Z. This is your story.
(From the official DayZ homepage.)


You've probably heard of it, the increasingly popular mod for ARMA II. Day Z takes place in Chernarus, the whole 225 square kilometers are explorable and you have one objective: Survive.
World is persistent, as in, you will keep your gear, health and location even if you log out, or change servers.

It is a very dangerous world. You have to fight (fast) zombies and (player controlled) bandits as well, you need to eat, drink water and avoid catching a cold if you want to live. Getting shot or hit by zombies can cause you to bleed, enter shock or break a bone, all which if not treated immediately can signify certain death. Once you're dead, you're dead. There's no respawning with your character, all your gear is lost to whoever loots your corpse.

This also isn't your daddy's shooter: Unlike 99% of all FPS games out there, bullets come out of your weapon (Instead of the top of your head) and have realistic ballistics applied to them. Bullet speed & gravity are a factor, weapons have weight to them, and simple things such as running around will mess up your aim if you're winded.

Currently, there is no penalty for killing other players other than losing humanity, so it is strongly encouraged to move with a group, and avoid large-PVP-heavy cities such as Chernogorsk, Elektrozavodsk, Stary Sobor or the Northwest airbase.

You will start with very basic gear, most important tip: GET OFF THE DAMN COAST!
It is full of bandits (Players who only kill survivors to loot their bodies) and staying too long there will only get you killed. You start without a map or even a compass. Look at the Sun or the stars to find your North (Or when you first login, look at the bottom right to know where you spawned, and based on that check an online map) and just head inland. Loot spawns in almost any enterable building, but all buildings spawn zombies (zeds). They react to sight and sound, shoot only if absolutely necessary.

Some people though, they say you should actually check out the coastal cities. I guess it depends on the servers:

The Deliverator wrote:
My current starting strategy has been to do a loop through either Elektro or Cherno to gear up, then head north in an attempt to get to Stary Sobor and it's military camp. I won't head inland until i have at least a set of matches, non-einfeld rifle, large pack (czech or alice), extra meds, extra food and one spare water bottle. It's easily doable in either city if you make sure to hit the fire stations and general stores. I haven't really worked with anyone yet other than one nice fellow who gave me a transfusion. 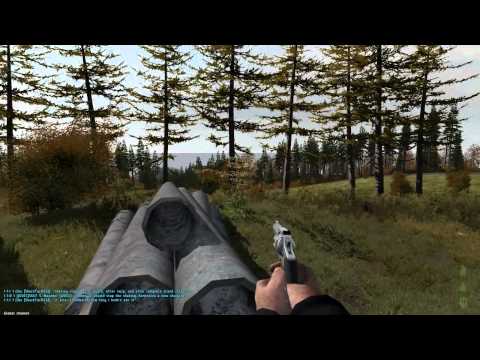 JOIN US!
We have 2 servers now!

Since the introduction of of regularcheck, server IO performance has taken a huge hit. If you are running multiple instances off of your server, this problem will be amplified. The best solution to the problem is to upgrade your server with SSDs. Larges sizes are not needed, so this can be done on a budget.

In the worst case scenario regularcheck can be turned off by changing the line to “regularcheck = "";.” Deleting your regularcheck line will not turn off regular checks.

BIS is working on addressing these issues and future updates may include a solution for the excessive IO usage.


Orik ran both instances on one server, and wasn't about to drop $$$ for an SSD because of a bug.

Fret not, we have these two other servers:

THE CLAM BAKE!
Search for: The Clam
Regular difficulty, no nametags, 3rd person enabled, no sidechat.

You need to have ARMA II: Combined Operations in order to play this.

One alternative is to download ARMA II Free and then buy Operation Arrowhead, but I believe you will have low res textures for ARMA II assets.

Install DayZ Commander, and let it do everything else for you.


Helpful stuff:
Wictro's Day-Z Help Center
I have this link bookmarked on my Steam internet browser, that way I can quickly use those loot maps without having to ALT TAB out of the game.

Low contrast night map.
For when navigating at night you don't get all the glare from the default white map.

Loot cheat sheet.
Information of what spawns where.