Welcome to the thread for everything that creeps, crawls, or slithers!

It's certainly the season for insects, spiders and snakes, but we can appreciate them year round too!

Even though they might be frightening to some, creatures like these can be stunningly beautiful, and really quite fascinating.

Let's take a look at some creepy-crawlies that might just change someone's mind on whether they're creepy after all!

That little fellow up there is a Bold Jumper, a beautiful little fellow with metallic blue mouthparts. Don't be afraid of him, because he isn't afraid of you! The bold jumper is an inquisitive little spider, and will happily jump up to a waiting hand to see what's going on. Like the vast majority of spiders, they're completely harmless and very charming! The Bold Jumper is a common species, so try taking a look for one sometime! You'll be glad you did.

This is a personal favorite of mine:the Labyrinth Orbweaver
The Labyrinth Orbweaver gets its name from the unique web it builds. Like a tiny camper in the woods, this forest dwelling species builds itself a little tent out of a leaf, which it integrates into a tangled web, hence the labyrinth name. They hide inside the tent as they wait for prey to come flying by, emerging to drag captured bugs back or to make additions to the web. I've been lucky enough to find one of these lovely spiders nearby, and I've been visiting her often. She laid eggs recently, and although this unfortunately means she doesn't have long left to live, I'm excited to see her offspring hatch and balloon away on little silk strands to find their own spot for a web.

Spiders are pretty cool, no? 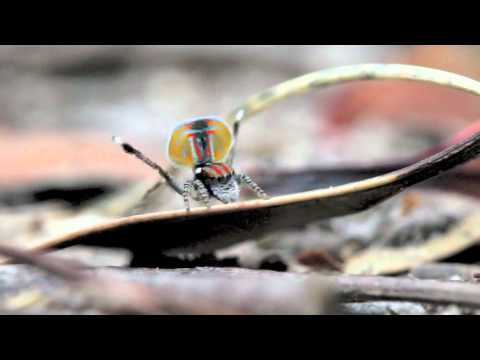 As resident bugboy, I'd be remiss not to include some six-legged friends too!

the fine specimen seen in this video is a dobsonfly, a nocturnal insect attracted to bright lights as so many bugs are. He's brandishing some incredible mouthparts, which look quite dangerous. However, you have nothing to fear from him-they're far too unwieldy to bite down on human skin! Instead, he uses them to grasp a female during mating. Speaking of females-they can bite with their smaller mouthparts, so don't bother them too much! (It's almost a universal rule of the invertebrates that the female is bigger and more dangerous, so do as the males bugs do and appease them with little gifts of food. You might avoid having your head bitten off post coitus!)

It's a personal life goal of mine to encounter one of these, but I haven't managed it just yet. My closest encounter was with a fishfly, a close relative. If you live near water, keep an eye out for me! The larvae are aquatic and the adults don't stray far from a lake or pond. You might also find them if you like fishing, as the larvae, called hellgrammites, are often sold as bait!

Speaking of bugs with impressive appendages, check this guy out! This one, again a male, is a scorpionfly! You can see why he has that name, with that impressive stinger and all. But trust me, he's harmless and definitely not interested in stinging you. He can't-even though it happens to resemble a scorpion's tail, it's actually his genitals! That's right, scorpionflies let it hang out and they don't even care. The lady scorpionflies are presumably very impressed. What's really cool-and I didn't even know this until I started putting this OP together-is that the scorpionflies are closely related to fleas! Talk about diversity of form!

there's so much to talk about when it comes to invertebrates! After all, they outnumber us mammals far both in number of species and biomass! We could probably fill a thread just talking about beetles, if we wanted to. There are a lot of beetles.

I'll finish up by linking to some cool things, in case you've been inspired to learn more!

If you're interested in identifying a bug, or just looking at some great pictures, my favorite resources are whatsthatbug.com/ and bugguide.net. They're both great ways to figure out what species you've just seen in your yard. And then, if you're like me, it's also a good way to get consumed entirely for an afternoon.


Everyone loves cordyceps, the fungus that literally turns ants and other insects into brainwashed zombies. This video gets linked a lot, but I'd figured I'd put it in anyway in case you haven't seen it yet. Insect parasites are really fascinating-crickets in particular are hosts to another mind-controlling parasite that forces them to commit suicide by jumping into water, at which point the parasite emerges as a very, very long worm and reproduces. I'll spare you videos of that, but they're all over youtube, if you're interested. 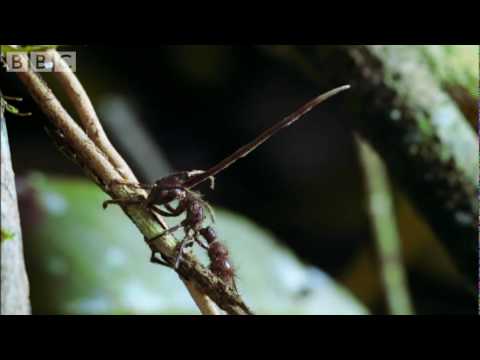 Finally, everyone should read this. It's a thrilling tale involving a species of giant stick insects that once were thought to be extinct, but had one remaining tiny population on what once was a volcano in the middle of the ocean. Surrounded by sharks. I'm not making this up.

So come into the parlor, as the spider said to the fly, pull up a seat, and talk about your favorite creepy-crawlies, whether they be spider, insect, snake, or something else entirely!