A Raspberry Pi is a $35 computer. Well, almost a computer. You still need a keyboard and mouse, a video-out source, an SD card or USB stick, probably a power source, plus all the cables. So what do you get? This:

No operating system is included; that's where the SD card comes in. There's a specially-designed Linux distro called Raspbian “wheezy”, although many other options exist.
For this project, I am going with Raspbmc, which is designed for using your Raspberry Pi as a media center.

Equipment
The intent is to create a headless media streaming center, and document the process in this thread. Got it on a whim after my father bought one, so will be a learning and amusing experience with pictures.

2012/12/05
Holding off on the lapdock for now, until all the various cables arrive. Plugged Pi into TV, and after a few restarts, Raspbmc launched. Interface is simialr to PS3's Cross Media Bar: 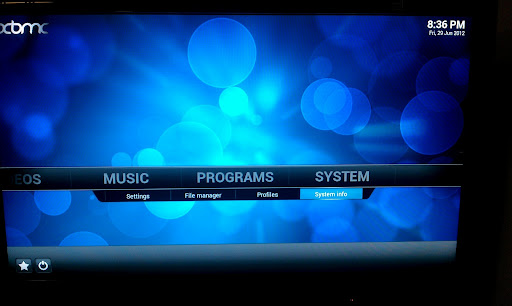 Probably need a case. Thinking about doing a LEGO one. For the drive is NTFS the way to go? Other option is exFAT.

2012/12/07
Got the HDMI micro to HDMI cable, so plugged it into the Lapdock offline to test. Wow. That is a fantastic display. Played Sita Sings The Blues and was very impressed. Keyboard was fine, trackpad was slightly laggy.

2013/01/29
This is why I don't make threads, no good at keeping up with them. So I moved a bunch of media over to the Seagate, tested it out and worked great. Then the very next morning plugged my laptop power into the HD and fried it. Managed to take it apart to get to the disk, and tried to connect to my laptop via a SATA to USB setup. Got actual smoke that time! Trying to decide if it's worth it to buy the controller board. Got most of the media restored from past backups, so will probably just go with a USB stick or something non-mechanical for the Pi.