[Rock Band]: 4 has been announced! Out this year!

Some people are legally adding in harmonies to pre-RB3 tracks, pro drums to old RBN tracks and a few other nifty things! Read all about it here. 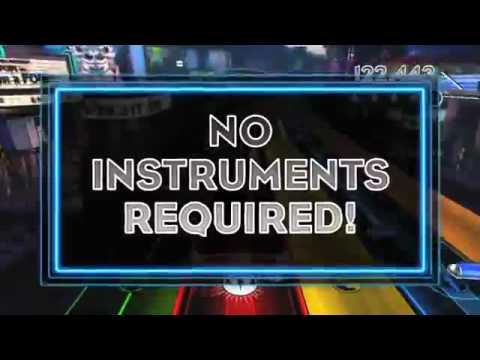 The game will feature 25 new songs (see the first five songs announced below) that will also be playable in Rock Band 3. It will be available via Xbox Live (Aug 29, 2012) and Playstation Network (Aug 28, 2012). It is important to note that this single player game is played via standard controllers ONLY (no peripheral usage), and will incorporate ALL existing Rock Band and Rock Band Network DLC.

Rock Band Blitz is scheduled for release on PlayStation®Network on August 28th for $14.99 and Xbox LIVE Arcade on August 29th for 1200 MS Points. For the latest assets, including screenshots and the game logo, please visit http://www.rockband.com/press/blitz.

Additionally, the following songs are missing/unplayable in Rock Band 3 currently:

FREE STUFF
The following songs are available for free download via the Rock Band Music Store for the PS3, 360, and the Wii (those not on the Wii are noted):
If you purchased Rock Band 2 brand spanking new, you are entitled to an additional 20 free tracks, mostly from Indie bands. Check the back of the manual for instructions. The code is a one time use. The pack includes:
"Ashes to Fire" by Ghost Hounds
"Bounce" by the Cab
"Burn You Down" by Opiate for the Masses
"Crazy Tuesday" by Thenewno2
"Database Corrupted" by Dealership
"Desperate Times, Desperate Measures" by Underoath
"Get It On" by the Chevelles
"Give It to Me" by the Cocktail Slippers
"I Wanna Be Your Man" by Endeverafter
"I'm Gone, I'm Going" by Lesley Roy
"I.V." by X Japan
"If I Ain't Got You" by the Len Price 3
"Like a Fool" by Shaimus
"Magnetic Baby" by Semi Precious Weapons
"No Regrets" by Authority Zero
"Prequel to the Sequel" by Between the Buried and Me
"Sons and Daughters" by the 88
"The Feeling" by Kutless
"The Time Is Wrong" by Tickle Me Pink
"Young" by Hollywood Undead


HARMONIX PODCAST
The podcast is linked up on the 'Zine page of the RockBand.com page. Subscribe via iTunes

Albums available for download so far:
Screaming for Vengeance by Judas Priest
The Cars by the Cars
Doolittle by the Pixies
Peace Sells...But Who's Buying by Megadeth
Moving Pictures by Rush
Blood Sugar Sex Magick by the Red Hot Chili Peppers
Dr. Feelgood by Mötley Crüe
The Colour and the Shape by the Foo Fighters
The Singles 1992-2003 by No Doubt
Texas Flood by Stevie Ray Vaughan and Double Trouble
Ten by Pearl Jam
Chinese Democracy by Guns 'n Roses
Nothing's Shocking by Jane's Addiction
Back from the Dead by Spinal Tap
Backspacer by Pearl Jam
Rust in Peace by Megadeth
Axis: Bold as Love by the Jimi Hendrix Experience
Tragic Kingdom by No Doubt (also Deep Cuts version for those that bought the Singles)
British Steel 30th Anniversary by Judas Priest
The Great Southern Trendkill by Pantera
Legend by Bob Marley & the Wailers
Are You Experienced? by the Jimi Hendrix Experience
Imagine by John Lennon
London Calling by the Clash
BNet: Arikado#1153 | Steam | LoL: Anzen
Arikado on March 2015
0
«1234567…100»