Can I hit the exploding rocks?San DiegoRegistered User regular
March 2007 edited June 2007 in Games and Technology Your AC is charging down the valley to take out a holed-up rebel faction's arsenal when all of a sudden a wall of missiles barrels straight at you. What do you do, hot shot? 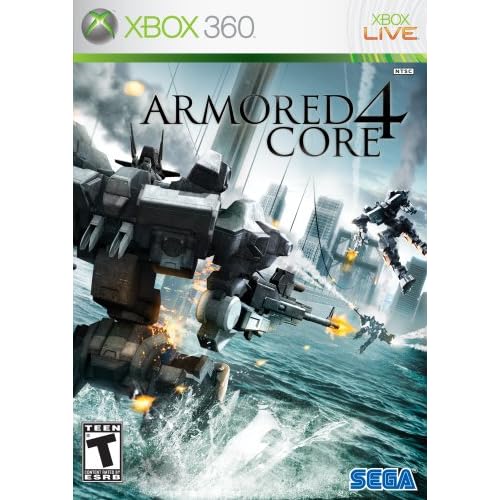 Armored Core 4 came out March 20th for the Xbox 360 and PS3, though most places received it a day later. Although it's Armored Core 4, it's actually more like... the 10th or so game in the series. Needless to say, the game has come a long way for those who've played it since the early games.

The story in almost every AC game is almost nonexistent; not that anyone's really complaining. It usually involves you, a Raven (AC-piloting Mercenary.), making a living for yourself by taking on work for one of several mega-corporations and blasting the crap out of ships, helicopters, tanks, turrets, MT's (Minor mechs), and even other Ravens. Said Mega-Corporations tend to not like each other most of the time and often employ you to screw the other over. In AC4's case, it's set in an alternate universe, so the classic holdover corporations, Kisaragi/Crest/Mirage, don't exist. Instead, the game's set in a world set after a global-scalle war that results six corporations ruling the world in a new order called the "Pax Economica". It isn't long before a new war's started between the six companies. The main character, a Raven, goes out to topple the Pax Economica. At least that's what I could gather from the story anyway. Apparently all NEXT (AC-caliber mechs) pilots seem to be Newtype-ish psychics of some sort with superhuman reflexes.

AC4 presents several huge differences. First and most obviously, AP and weapon power have been inflated to hell. AP is now at a theoretical max of close to 45,000 compared to the old 9999. As such, wapons now inflict a shitload more damage to compensate. Next, we have the elmination of the Heat system. AC fans rejoice! This means that EN weapons are for the most part VIABLE now, and you don't have to worry about overheating over every little thing now.
â€¢ Instead, AC's now field the Primal Armor system. Primal Armor is an energy barrier protecting every AC from a significant amount of harm. It has its own meter and its strength can be enhanced via parts or tuning. Kojima Particle (the stuff that creates Primal Armor) output is affected by the generator you use. Your Primal Armor meter as well as your EN meter are now used to power your Overboost. Every last body frame utilizes Overboost and weapon storage. EO types have been eliminated as well as Hover Legs.
â€¢ Boosters are now seperated into four categores: Main, Back, Side, and Overboost. Main boosters are the traditional back-mounted ones and mainly affect forward and vertical movement. Back boosters mostly affect backwards movement. Side Boosters affect side to side performance. Finally, OB boosters affect your OB effectiveness. The first three work in unison to affect your AC's overall mobility when using boosters. Speaking of which, Boosters offer two huge benefits in AC4:
â€¢ Boosters no longer deplete your EN meter when dashing along the ground. This is a very good thing. It helps you get around faster and quickens the overall pace of the game. The only time your EN meter now depletes is when you go airborne and/or use Quick-Boosts. This is one of the main reasons why Hover Legs were probably removed. They're no longer necessary!
â€¢Quick Boosts are a godsend. Remember the booster extensions from older AC games? They're all built-in now and accessible with a quick press of the right trigger. You can quick-boost in any horizontal direction for a quick dodge. When standing still, you can turn and boost for a quick 90/180-degree turn. Each of the booster types affects the EN drain level of Quick Boost-usage, how powerful quick boosts can be, and how long Quick Boosts last. With the addition of Quick Boosts, AC is now a step closer to Zone of the Enders-level speed.
â€¢ Inside parts have been removed. Extension Parts are now known as Shoulder weapons and can be accessed via the B button. They include flares, Relation missiles, a camera blinder, shoulder buckshot, ECM jammers, and a Primal Armor recharger.
â€¢ Weapon usage is now incredibly intuitive. Shoulder bumpers now switch between your left arm/back weapon and your right arm/back weapon. X utilizes your right arm weapon while A is your Left Arm weapon. Weapons can be used on either arm now, although any back or arm weapon you buy can only be used on that side. You have to re-buy it for the opposite side. This new system allows for an incredible amount of loadout options normally not possible in older AC games. It also gets rid of the cumbersome "One main weapon at a time" system older AC games ran with. The game now sees it as this: Left Arm/Back weapon, Right Arm/Back weapon, and your Shoulder weapon. It's really good stuff.
â€¢ Optional Parts and the part-tuning system have now been replaced with a new type of Tuning system. The farther you progress into the game, the more your available memory increases. You can allocate said memory points into several kinds of categories such as EN output/capacity, Load capacity, Primal Armor strength, Booster power, Quick-Boost power, etc.
â€¢ Stabilizers! Stabilizers are a pretty cool addition. Your AC is now sensitive to weight balance as represented by a graph. Your AC's speed and mobility will now be affected by how front/back/left/right-heavy your AC is. If you equip some big guns and find your performance taking a hit, you can equip Stabilizers to balance out the weight. Hell, if you want, you can deliberately make any side you want heavier in order to make your AC turn one way better or go faster when going forward as opposed to going backwards, etc. I reccommend doing it manually; Stabilizers offer a TON of eye candy addons that look pretty damn cool, such as Gundam Style head antennae, back fins, ankle fins, elbow blade thingies, wing fins, etc.
â€¢ Did I mention you can shoot down missiles?
â€¢ You can fire shoulder cannons while flying around.
â€¢ No more annoying aiming reticle. You can now click the left joystick to focus the camera on your current target. The Left Joystick and the right joystick now operate FPS-style. Regulation 1.00 Original
- what the disc ships with