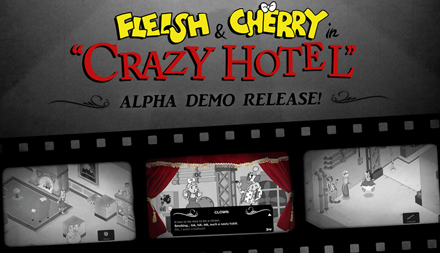 Here is a trailer for the demo: 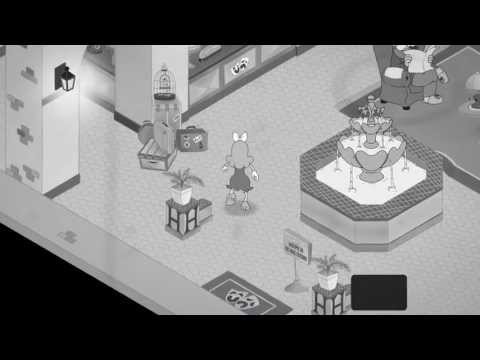 Description
Fleish & Cherry in Crazy Hotel is a black and white adventure game set in the 1930s for PC, Mac and Linux. It puts the player in the shoes of Cherry, the lovely girlfriend of Fleish the Fox, star of all the shorts recorded in the cartoon land of Toonville. His arch-nemesis Mr Mintz always tries to ruin his adventures by capturing Cherry, but despite his evil machinations, Fleish continuously manages to get his happy ending with her. Tired and sick of Fleish's fame, Mr Mintz captures Fleish and takes him to the top of a hotel under construction. This time, the player will join Cherry in a journey through the hotel and help her rescue her beloved Fleish from the clutches of the evil Mr Mintz. We are proud to announce our first alpha demo for Fleish & Cherry in Crazy Hotel for PC, Mac and Linux.
This demo is an alpha prototype of the conversational puzzles part in the game, with three different joke endings depending of you final choice (the endings are not really that important, only a small joke, so don't worry about getting one or the other). This small story we created for the demo will not be present in the final game, and some jokes, room placement, characters and storylines will change completely in other demos and the final game, so no spoilers here.

There are three versions of this demo for Windows, Mac and Linux*
*Concerning the Linux version we have encountered some issues with Ubuntu's default desktop. This playable demo contains:
As this is only an alpha demo version lots of things will vary between this demo, future demos, and the final game.
We would love to hear your feedback and opinions, the game is nowhere near to be finished (there's still lots of details to add as we stated above), but we really think that this demo can make you feel, at least aesthetically, how the game will turn out.