Registered User admin
July 2013 in Indie Games
Breach & Clear is a new tactical strategy game from Gun Media and Mighty Rabbit Studios. Currently out now to the Apple App Store, Breach & Clear will also launch to Android soon! We've got THREE codes to give to users of Penny Arcade, we'll be giving them out by Random Number Generator on Friday!

You can get the game in the App Store right now! 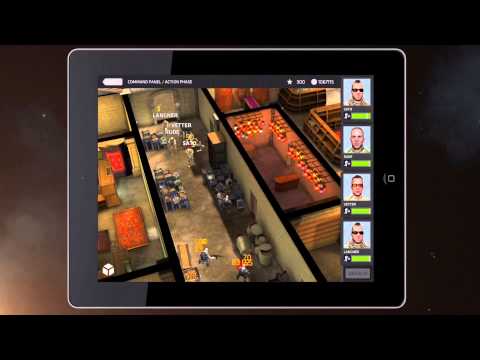 Choose your real-world squad -- US Army Rangers, US Navy Seals, Canadas JTF2, and more -- and take on a variety of foes with different skill-sets and abilities. Learn to approach, engage, and dominate your opponent through superior tactics and training, while leveling your characters in one of the deepest progression systems created for mobile devices.

FULL CUSTOMIZATION
Build your arsenal with thousands of gun combinations, and specialize each soldier with a combination of perks, tactics, camo, armor, and inventory all tailored by you. Tune your load-out with consumables like UAV Drones and Breaching Charges that can change the course of battle!

OWN EVERY ANGLE
Each soldier matters, every decision counts. Plan your mission step-by-step: split up your team and assault the map from multiple entrance points, set routes and fields of fire, use cover and outflank your foe. Now that I have all the marketing hulla-bullow out of the way, I came to Penny Arcade because I am a pretty major fan of what Gabe and Tycho do and what this forum stands for. Breach & Clear has a very triple-A approach to putting ourselves out there. Our dev team has guys who've worked on titles like Modern Warfare, Ghost Recon, Rainbow Six, Everquest and Command & Conquer.

We put Breach & Clear out there to be a core-oriented tactical strategy game that casual gamers could identify with. With the title out, we were able to hit #6 overall in the App Store, #2 on Top Paid Apps and we've been #1 on strategy since launch. We've been blown away by the response we've gotten from gamers, and we've been completely on track with the professional reviews we've gotten.

For the team, it was a choice to get the game out to gauge where we were on 'is this game fun?' The core design of the game seems to resonate with most people. From here on out, it is all about content, features and expanding the game for more and more users.

Also; we totally nerded out when this happened: