Registered User new member
December 2013 edited December 2013 in Artist's Corner
My favorite possible thing is being able to summarize it just like that. It's been a little hard to get feedback on this thing, but I remembered how reliable you guys have been about projects I've brought in the past.

On /tg/ of 4chan (possibly the greatest, most courteous board they have) I started a 'Quest Thread' mere hours after I learned they were a thing. If I wasn't an avid follower of Two Best Friends, and their Super Best Friendscast, I wouldn't have known to watch this video. 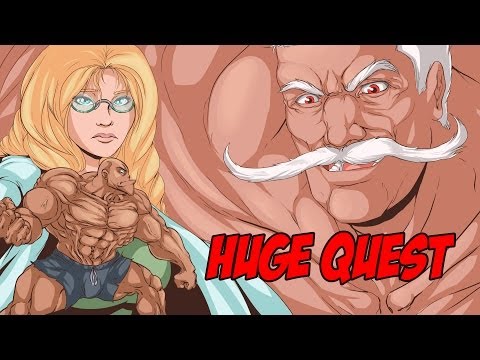 And by extension, I wouldn't be on this project now.

For a couple months, I'd been backburning this idea about a kick-and-jump robot who is making the best of a weird situation, in a giant elaborate dungeon suspended in the sky filled with oddities at every turn. And I was just gonna set it aside as a normal action comic, but now that I've seen the fun that comes out of reader-involvement, I wouldn't have it any other way. I changed the premise a little bit (making him a recovering/rebooting amnesiac) to fit that format's immersion.

I do hope to get a site for this eventually, with its own individual forum, where decisions are easier to organize (on 4chan you have to worry about bumping threads or they -die-). But before that, I'm interested in hearing what non-/tg/ folk have to say about it. /tg/ is currently where all the crossroad decisions are made. Sometimes choices are simple as "Either do X or Y" but there's a lot of tangential stuff that makes its way into the blend.

Would love to hear any and all thoughts, as well as converse about the format itself. Recommended reading of this kind, perhaps. You might be familiar with Kazerad's comic, Prequel.
tumblr
deviantart
my silly comic (chaos in the tropics)
my sillier comic (qrane)
Scribblehatch on December 2013
0