Administrator, ClubPA admin
May 2014 in Indie Games
Game Overview
Mutant Factions is a free online shooter with guns, skills, vehicles and more. It plays like a top-down Counter Strike but with one key difference - you play as a mutant, not a man. This means you get to unlock awesome mutant skills such as Invisibility, Bullet Time, Blade Fury and Teleportation. Combining these skills with modern weaponry and vehicles makes for very fast-paced and tactical combat. You can cast Invisibility, sneak up on your enemy and then blast him in the face with a shotgun. Or you can unlock Phasic Bullets and snipe people by bouncing your bullets around corners. There are 33 skills in the game and countless combos and counters to explore as you construct your ultimate skill build!

Here is a youtube video showing off the gameplay: 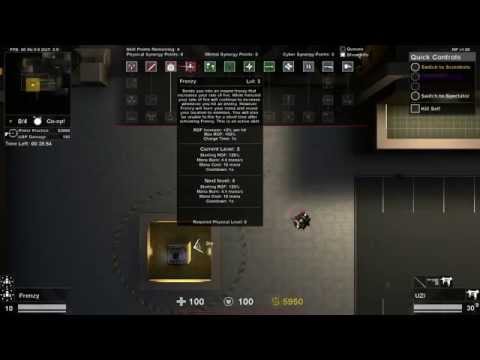 And here are a few sexy screenshots:

One of the best way to kill zombies is by setting up vehicle roadblocks, letting the zombies bunch up behind them and then blowing them all up!

Here we see some hot vehicle action, where a Roadster has just narrowly dodged an incoming stinger missile fired from the Hornet vehicle.

You can unlock the skills with a single click in-game, allowing you to construct skill builds on the fly in Quickmatch servers.

Buy vehicles from your spawn and get your teammates to hop in! Then go do driveby shootings in the enemy's base!


Key Features
-33 skills divided over 3 skill trees. Each skill has been uniquely balanced by having both a benefit AND a penalty. This is key and what makes this game so unique. In earlier versions skills only provided benefits, but this made the game horribly unfair for new players. 3 years and 20 versions later, the skills have been rebalanced to provide unique penalties as well. This means that a brand new level 10 player can defeat a level 100 player by exploiting his weaknesses. The end result is you have a game that you can quickly jump into and start killing in minutes, while still being able to progress your character, explore awesome skill builds and not put anyone at an unfair advantage. An example of a skill might be Blade Fury which does lots of slashing damage to nearby enemies, but makes your bullets less accurate. Good players will know when to cast the skill and when not to, based on the situation at hand. Another example is Invisibility, which makes you invisible but also drains away your mana over time. Lots of skills to explore and experiment with!

-Over 30 uniquely balanced vehicles and weapons. A lot of versions have been released for Mutant Factions during it's beta stage to iron out all the balance issues. Finally the game is in a state where combat is nice and balanced and players must spend or save their cash wisely to choose the best weapon at the time. For example, shotguns are great up close, rifles are great at range, and machine guns are great against vehicles.

-Ranked servers have recently been added to the game to satisfy the needs of more competitive players. By joining a ranked server you are committed to a match, similar to DOTA2 or CS:GO. At the end of the round your rank will be shifted by how you score against your enemies. The ranking system is based on the ELO rating system used in chess and provides a fairly accurate representation of a players skill level. Very addictive and provides a great goal for those who want to improve their skills and master the game.

-An inbuilt map editor allows community members to create maps. As a result there are countless user-generated maps and plenty of variety. Map makers are also awarded these things called "community credits" which they can use to unlock sexy cosmetics and show off their support. The cosmetics have no impact on gameplay but look pretty swish. Stuff like capes, lightsabers, vehicle decals, etc... there are no hat unlocks unfortunately.

- A variety of PvP and PvE game modes. The most recent addition is Outbreak which is a PvE zombie slaughtering game mode. This game mode is a great way to practice as you can learn how the skills work against zombies. The zombie difficulty will scale up and down based on your performance in game to keep a constant challenge. The skills work amazing against the zombies too and make you feel like a god as you destroy them!

Outbreak is the newest game mode and features cooperative PvE gameplay. Group together and survive against waves of zombies!


Come Play!
Mutant Factions has been in development for over 6 years and has only recently released version 1.0! It's a very exciting time for the game and a great time to start playing! The game is 100% free and only 28MB to download, so download it now and you'll be mutating in minutes!