ANNOUNCEMENT: Please remember that the meetup is upstairs on the 2nd floor and won't be readily visible from the ground-floor lobbies. The hotel has asked that we endeavor to use the rooms provided instead of the lobbies to keep fire codes under control. There is a ton of lobby space upstairs too.

WHAT: A coordinated meetup the night before PAX for anyone with board games, or anyone who wants to play board games. It's a great way to kick off PAX and meet some new friends. This is a Free, All-Ages event.

HISTORY
This event is not hosted, endorsed, or sponsored by Penny Arcade or by any professional group or company other than the Sheraton.

Back in the day, when PAX was wee, there was no coordinated game night meetup on PAXmas eve. Folks who were staying at the hotels would naturally just gravitate to the lobbies to play games. After a few years, people started to pre-organize these informal meet ups on the forums but it was still small enough that they didn't need to work with the hotels - everyone would just meet in the bar or lobby and have a game night to pass the evening.

Of course, this quickly became a popular idea, and the size of the event started to create problems with the hotel staff and management. At both EAST and PRIME, there were conflicts with hotel staff and issues with fire code violations, and complaints from other guests. It was creating bad juju for us PAXers, and setting a tone of frustration and contention with the hotel bar staff and managers for the weekend.

About 3 years ago, I started to voluntarily work with hotel management to provide us with an approved space to game. Citing the logic of "This is going to happen whether you want it to or not, so let's corral it and make sure it's safe and cuddly for everyone!", we successfully built relationships with the hotel management and got a bigger, more comfy space in the deal.

The hotel on the other hand, expects a good take from the bar and restaurant in exchange for the free space, tables, staff and setup that they provide. That's their justification. So you'll see lots of encouragement from the coordinator to purchase generously while you're there. They're not compensated in any way for the event and are under no obligation to host it for us, so a good bar and restaurant take that evening is a pretty great deal for everybody, really.

So this is still an informal, attendee-driven meetup. It's free, and open to all ages, which is super important to me personally. The games are all just the games that you guys haul down to the lobby, and there's really no hosted structure persay. Last year I implemented a better game matchup system to help people find games to play, but it's very simple.

This event has now become a PAX fixture, which is cool as all hell. Alternate game nights have started happening too, like the Marriott Long Wharf at East, or the swanky CTCC club event at Prime. Each event is unique, put together and hosted by forum volunteers, and provides its own experience to attendees. Something for everyone!

What makes PAX special above all other cons is the community. And having a community that grew an event like this organically, that is still very much a self-policed casual gathering is AMAZING. I

you guys and will do my best every year to make sure there's a place for you to game the night before.

WHEN: Thursday August 28 @ 4:00 PM until late, late, late. The rooms will stay open until 2:00 AM, at which time any remaining games will need to be moved to the lobbies.

THE RULES
- Don't be a dick. To anyone. Ever.
- The hotels usually give us amazing space and service for free. The best way to show your appreciation is to support the hotel bar and restaurant while you're there.
- If you get asked by the hotel staff to move, please be respectful and honor their request.

On the Thread
1. If you have games to bring, post what you plan to have on hand that night.
2. If you're looking to play a specific game, please post your request.

Once Present at the Hotel
1. Your coordinator for the night is LexiconGrrl. You can find her at the Cookie Brigade Table if you have any questions.
2. If you've got a game and are looking for players, put the box top of the game vertically on your table. This is the universal sign for "I don't care who you are, please join us"
3. If you're looking to join a game, look for vertical box tops.
4. Use the twitter hashtag #SheratonTabletop to find or advertise games.
5. If you want to leave your game for checkout by other people, you can leave it at the check in table. Make sure you leave your contact information inside the box, since you might want to leave before your game does. DISCLAIMER: Although we strive to communicate the principles of respecting other peoples' property, leaving your games for checkout is AT YOUR OWN RISK. This is a volunteer event, and we don't police the crowd. 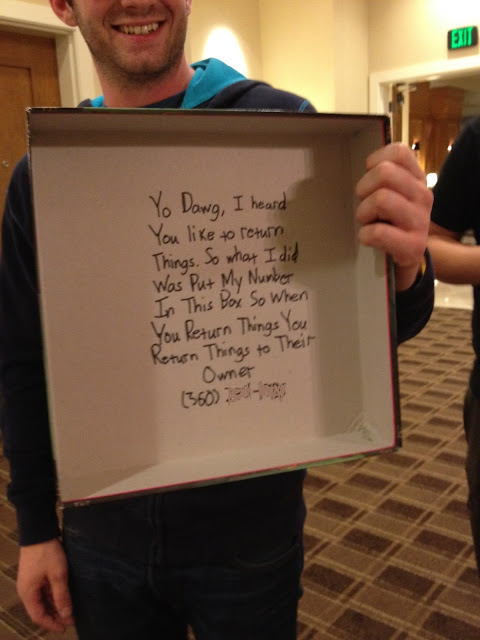 Available Games Only confirmed games will show here. Posts with "I can bring X or Y or Z" won't be listed until you're sure.