I feel the need. The need for speed. (And sometimes a nice jaunt through the serene afternoon sky)

If you're looking for War Thunder, go here. War Thunder is popular enough to have it's own thread!

Whether it's dropping bombs and firing missiles or landing a super jumbo in a busy pattern at Heathrow that lights your fire, flight sims are for you.

Flight sims are a genre that has been neglected over the years, but seems to be making a modest comeback with new display technology (Oculus Rift), and the resurgence of flight sim's sibling genre, the space sim. This has ignited interest in peripherals and titles, and both flight and space sims seem posed to enter a new healthier era. If you've already spent all that money on a fancy stick for Star Citizen or Elite: Dangerous, why not check out some flight sims?

This can be a daunting genre to approach. They aren't known for user friendly interfaces, or pulling any punches for the new user. You're going to hear more about bogey dopes, hot flankers, angles, vectors, foxes, splashes, IFR, VFR, approaches and flaring than your poor head will know what to do with. Push through the initial confusion and there's a world of game play depth to be explored. DCS World and it's modules are some of the most up to date pure combat flight sims we have today. Eagle Dynamics and it's various plane modeling contractors are still adding new modules, new planes and updating old planes. The simulations here aren't always perfect, and the graphics engine is two generations behind, but DCS is probably the easiest of the combat sims to simply boot up and play. DCS World is available on Steam for free!. This only gets you a couple of aircraft (the Su-25 and the TP-51D trainer), but it's a great way to get started. Recommended first purchase is the Flaming Cliffs 3 addon which adds a ton of new aircraft, specifically the A-10A and the F-15C, both some of the most interesting and exciting planes in DCS.

Falcon 4.0 is the crown jewel of the Falcon series, and probably one of the best consumer simulators ever written. Unfortunately, it was released in 1998. Lucky for us, there is a dedicated and awesome fan community which has kept the game alive through the BMS addon, which is effectively a total overhaul of Falcon 4.0 with new Block 50/52 F-16's (yay Helmet Mounted Cuing System!). You'll need to legally procure a copy of Falcon 4.0 and do some setup before you can play this, but it's worth it if you're in to sims. A World War II flight simulator, IL-2 is a highly regarded simulation if you're flight preferences lean toward the piston and propeller persuasion. It's had several updates over the years and still has an active and dedicated community. A new iteration of the game, IL-2 Sturmovik: Battle of Stalingrad was released in October of last year. It's had some mixed reviews, but the developers seem committed to getting it up to speed.

Update: According to our own @TOGSolid, Cliffs of Dover is the new hotness in IL-2. It has a thriving mod community and seems to be where the community has congregated. One of the most highly regarded flight simulators ever made, by a company you'd never expect. If leisurely cross country flights, and landing at busy commercial airports are more your thing, FSX is considered one of the best. It's available at a reasonable price on Steam and has a beautifully mapped terrain representation. In addition it's incredibly active and supported by the community, with tons and tons of mods that add new planes (including military and aerobatic...the best F/A-18E Super Hornet model in the world right now is an FSX mod). I haven't personally gotten to suit up in X Plane, but everyone I know who has loves it. It's probably the most graphically impressive of the flight sims available today, with incredibly realistic representations of cities and terrain. It's available for home use at the regular 60 dollar price point, and seems like a neat step up in technology if you want to go the ultra realistic route. It, much like FSX, is also supported by a robust mod community that offers both free and paid content. Rise of flight is a World War 1 combat simulator featuring a wide range of classic WW1 era biplanes, triplanes, and even a couple very early monoplanes. If you're used to flying modern jets or even classic WW2 fighters this simulator is going to be a very different animal to get used to but ultimately very rewarding since everything is much more hands on with these planes and the lower horsepower but higher lift will force you to alter your tactics. To put it simply, this is a game where you can get a pistol for your pilot and actually use the damn thing.

Gear (Or how flight sim fans are poor)

I won't lie, flight sim gear is hilariously expensive. This is because the equipment itself isn't produced in massive quantities due to low demand, and the demanding nature of flight sim fans. Generally speaking you're going to be looking at two types of gear. In either case, you're going to want decent rudder pedals. From there you're looking at two distinct types of controls: HOTAS (hands on throttle and stick, military), and yoke + throttle (civilian/commercial). The classifications are general of course, there are military aircraft that use yokes and civilian aircraft that use variations of HOTAS. Unfortunately I know little about yokes, so I'll be leaving that section for someone else to fill in. For the rest of this section I'll be talking about HOTAS and pedals. I'm also only going to list items here that are generally considered good kit and worth buying for semi-serious simulation. You can certainly get by with a basic Logitech 3D Pro, but that's not what most people come to sims for.

Entry Level - The venerable Saitek X-52
This has long been the standard for My First Hotas buyers, and it remains today a great value buy if you're aware of it's limitations and issues. It's a perfectly capable setup, and with some basic modding can even be great. At the 130-150 dollar price point, it's obviously a value winner. If you can't step up one price point to the CH pairing or the X-55, this will get you going quite nicely. It also has rudder twist on the stick, allowing you to forgo buying pedals for a bit. Value - CH Combatstick + CH Pro Throttle
They aren't real lookers, but CH makes a solid set of stick and throttle in the Combatstick and Pro Throttle. The pairing will cost you around 200 bucks, and you have to buy them seperately, but they are quality kit that is highly reviewed.

Value - HOTAS in a box - Saitek X-55
If you're looking for a HOTAS in a box, and something that looks a touch nicer than the CH kit, the Saitek X-55 Rhino has solid reviews. It seems to have fixed some of the serious manufacturing problems that plagued it's younger brother the X-52. There are still occasionally problems reported with it, but overall owners seem happy with it. It will run you the same 200'ish price tag that the CH set will run you.

Money Is No Object - Thrustmaster Warthog
Currently this is the crown jewel of mass produced HOTAS kit available Stateside. European customers have a couple of other high end options, but for us dirty Yanks, the Warthog is the top of the heap without getting in to crazy expensive custom gear and cockpit setups. The Warthog is a near 1:1 replication of the A-10C Warthog's HOTAS setup. It's absolutely covered in buttons and switches and allows you to map nearly everything you need. This is the option I can talk the most about, as it's the HOTAS I personally own. It's heavy, all metal, built to last and incredibly nice. As with all flight sim gear, it's not without it's issues though. There is a known, and relatively common, "stiction" (where the stick doesn't have a smooth pull and feels like it sticks) issue. It's fixable, but many people rightly feel that a 400 dollar piece of kit shouldn't have issues like that.

Value - CH Pro Pedals
Maybe the best reasonably priced pedals you can get, CH's pedals are widely loved by all sim pilots who own them. At around 110-120 dollars, you can get these plus a Rhino or CH HOTAS setup and be fully kitted to fly for 320 dollars, give or take. I highly, highly recommend these over the Saitek Pro Flight Rudder Pedals. Olive Garden Money - Saitek Pro Flight COMBAT Rudder Pedals
These are a different and more pricey product than the roundly frowned upon Saitek Pro Flight Rudder Pedals. These feature some metal construction and look and feel more like combat pedals. They are running in the 190 dollar price range currently. Even as someone who owns these, I question whether the step up from the CH Products is worth it, but these are available if you want to spend a touch more. These are stupidly expensive and have a really shady buying process requiring you to deposit money in to the Polish makers bank account...but man, what pedals these are. The maker is currently working on a set of Slaw Device F-16C pedals that may actually tempt me. So how much are we talking here? 500 bucks, plus about 65 dollars for US shipping. In addition, you basically have to wire transfer the guy money as he has no web store, or even a website. Each set is hand built for to order. TrackIR / FreeTrack
TrackIR / FreeTrack are head tracking solutions that are generally used to slave the view in game to your head movement. The more horizontal and vertical screen space you have (spanning multiple monitors in some cases), the more realistic head tracking will feel, but it can be used with a single screen fine. You'll just have significantly more sensitive inputs. For serious dog fighting in combat sims, I consider some kind of head tracking or tracked view essential. You tend to spend more time looking around you than looking at your hud/instruments and the tracking is invaluable.

Oculus Rift / VR
Even better than TrackIR is an Oculus Rift or another good VR head set. Frankly if the current Crystal Bay prototype was released as a dev kit, I'd have already ordered one. I truly believe these are the future of flight (and space) sims and will revolutionize the genre. The current crop of flight sims has varying support for Oculus, but fans for most of the games have made it work. Some duck tape and tech savvy helpful.

General
XPlane.org Flight School - Tailored to XPlane, it has a lot of general flight stuff as well. 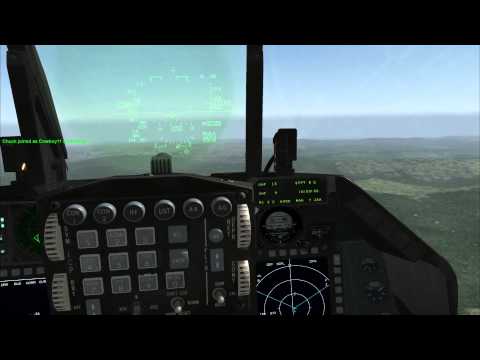 Two hour tutorial that takes you from end of the runway to flying basic formation. Tons of info, but worth keeping bookmarked. 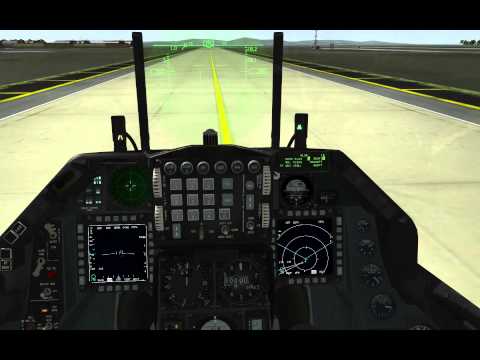 Playlist of 20 odd in-depth tutorials from YouTuber Krouse. Ignore his mispronunciation of AAMRAM, his tutorials are great.


Direct link to Krouse's ramp (or cold) start tutorial. Great to keep handy if you want to memorize F-16 startup. 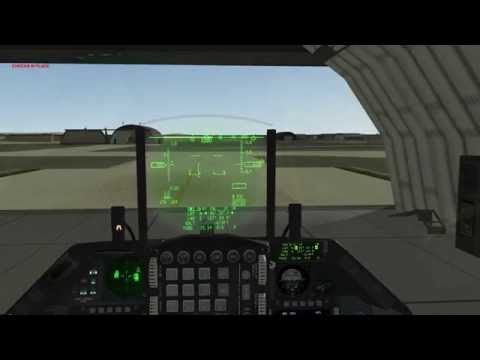 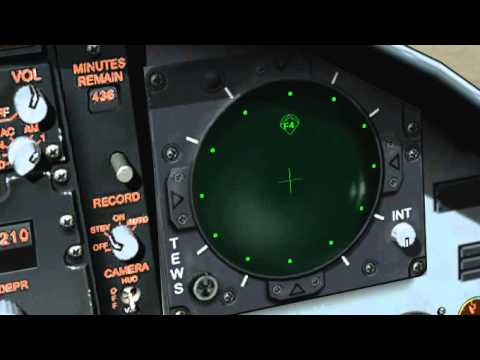 This is truly a living OP, and is always open for updating. Flight sims are complicated and I can't possibly know everything about them. If there is a game, peripheral, setup or tutorial you don't see listed here you think it should have, please let me know! Let's get it added.