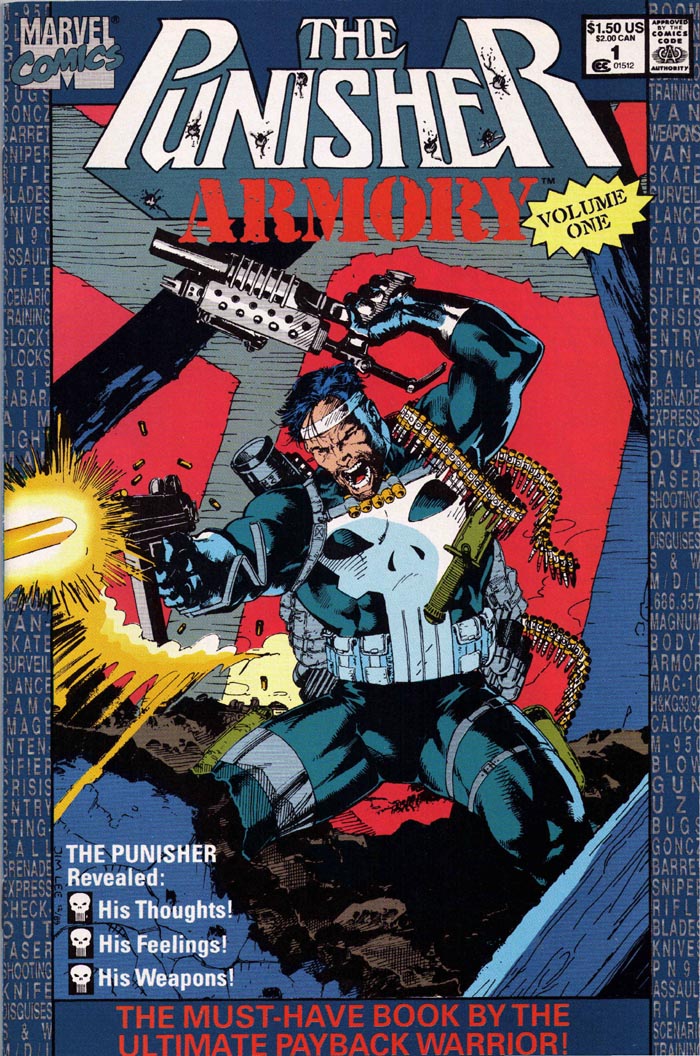 I love Garth Ennis' run on The Punisher. Yes, it's Ellis being Ellis, and Steve Dillon being Steve Dillon. It's the team that brought us Preacher and a damn good run on Hellblazer, and for the Punisher we get very silly-serious story-lines like "Welcome Back, Frank" and really dark ones like "The Slavers," but I love it anyway. The Punisher, for those of a certain vintage, hits a nerve. We don't want FrankenCastle, or Angelic Castle, or even Mob Boss Castle. The appeal of the Punisher to a lot of fans is the realism. Yes, it's a bit over-the-top vigilante fantasy along the lines of a Marc Bolan novel, but that's half the fun - and what most people ten to forget, in the weird continuity and ongoing trendy rehashes that mark comic publishing, is that the Punisher is not the byproduct of the grimderp Iron Age, where Image Comics had Liefeld and Jim Lee in a contest to see who could put the most guns, pouches, and spikes on everything. Hell, The Punisher is even older than Wolverine by a few months (both having debuted in 1974). I'm old enough to remember when the Punisher was, like Conan the Barbarian, a more grown-up comic. He had his own full-sized magazine at some point, and in the '90s they didn't shy away from the blood and drugs and - I think this is still a bit weird after Columbine - guns. It really is one of the quintessential aspects of the character. The Punisher shoots people. But he doesn't just shoot people - he has a ton of weapons. And unlike Batman or Moon Knight, he doesn't have them all stored away in a utility belt somewhere.

So first and foremost, what you need to know before delving into this ten-issue series from 1990, is that this entire series is basically weapon porn. It's a bit like the highlights of any gun-and-arrow rack at your local redneck Walmart or military surplus store. The closest thing in format that Marvel had put out before were the Official Handbooks of the Marvel Universe (which I love; DC had the Who's Who but it just wasn't the same - even back in the 80s and 90s Marvel put a lot more love into the things) - of which there is a small bit of crossover with the Punisher's "Battle Van."

This was a thing, once.

Like the OHotMU, these books were 32 pages with no ads. Not a one.

But The Punisher Armory is essentially different not just in length (hey, even Iron Man didn't get a 10-issue series detailing each of his bloody suits), but in concept and presentation. Each page (or two-page splash) is a carefully drafted, technically detailed, lovingly gritty and realistic scene with no human characters. Most of the time, you're looking at a part of the Punisher's workspace, or the aftermath of one of his bloody assaults or training exercises. There's no characters, just these sort of diary entries from the Punisher himself - who, if you've imagined as a hardboiled, no-nonsense, no-laughs kind of guy, the amount of humor (grim though it is) might surprise you. Because this is looking at the Punisher through his weapons - and he's a gun nut, a knife nut, but he's also highly trained and practical. He likes to fiddle with things, modify things, keep up on the latest trivia. The small peeks into his life and operations are fantastic, the attention to detail that writer and artist Eliot E. Brown have put into each page is phenomenal. Let's give a sample. 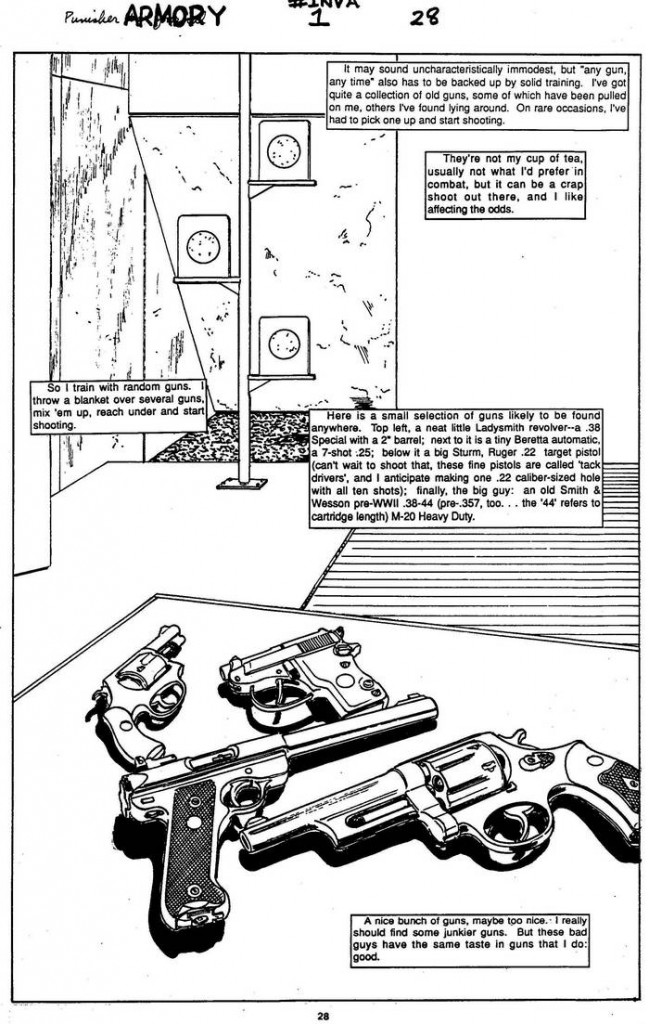 And here's a colored page:

(Yeah, the colors look flat, but remember, this stuff back in 1990 was basically newsprint, not the glossy pages you're used to.)

Going back through these, the breadth is kinda awesome. I remember using these books as manuals for games of Shadowrun. Sure, there's lots of guns of very stripe and caliber, but there's also knives, axes, blowguns, tranqs, explosives, various kinds of surveillance and training set-ups - many based on real-life police or military simulators, camouflage and armor, and lots of gee-whiz gear that's half way between spy gear and special forces. With a few exceptions, it's mostly very done-to-earth and practical too - the Punisher never knows when he'll need the tommy gun, and he only has so many rounds of ammo for this weird old WWII gun that some little old lady dropped in his lap. Most of the electronics are laughably dated. There are pages for crossbows and holsters, and to-go kits and stashes he has set up for quick exits and emergencies.

Some of the stuff is very high-tech for the 90s. There's an early, bulky example of a couple drone and a rocket pack - this was back in the day when the Punisher palled around with a hacker named Micro Chip and could get some really cool goodies.

This was really good casting.

There's a ballistic knife. Which I love. It's silly, and even the Punisher kind of knows it, but it's a bit of a surprise so he practices with it. And it shows how this series was important, because Garth Ennis shows the Punisher using the ballistic knife in the pages of "Welcome Back, Frank." That's kind of the thing I mean when I say that a comic is influential; The Punisher Armory is something that has a certain timeless quality to it. It's like Silver Age Superman. You might not go back there and sort through the mess, but there's lots of fun stuff you would love to see again in the modern comic - and unlike with Supes, it's really easy for the Punisher to show up with a rocket-propelled grenade or a door ram made out of a length of pipe filled with cement. 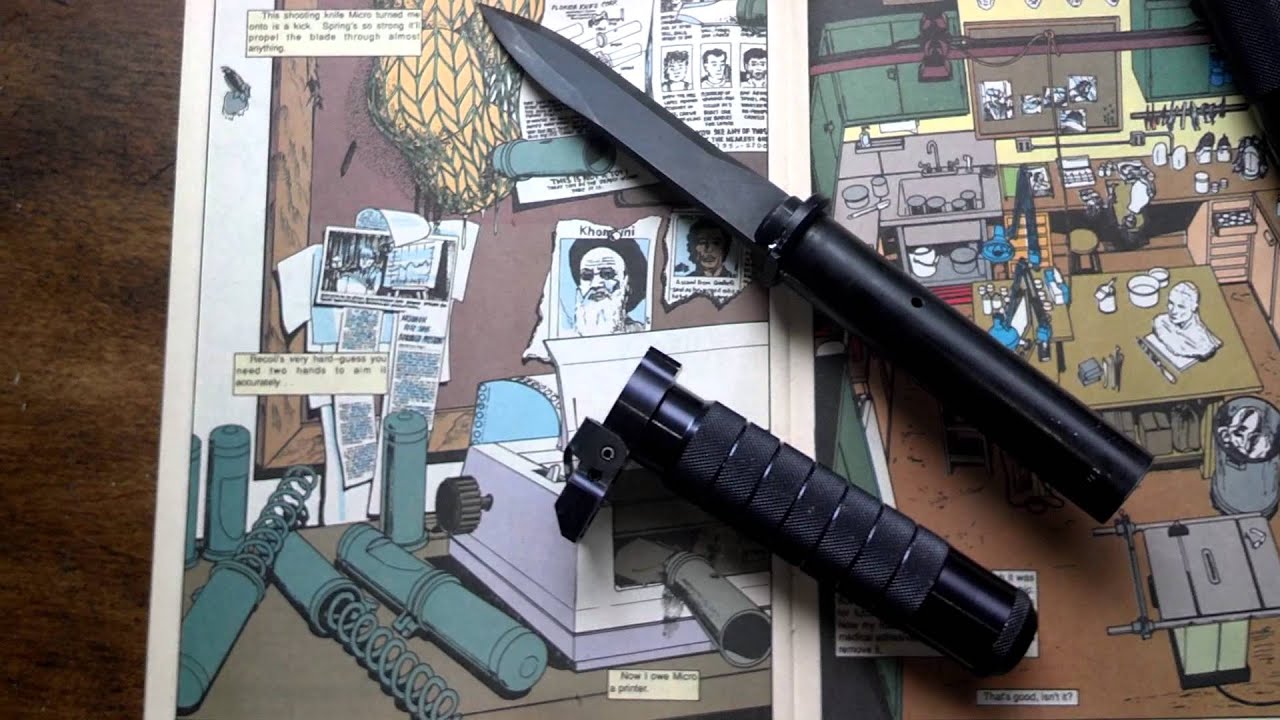 I could go on for a couple more pages about why I love this comic. But I'm gonna end with the last page of #2, which I just think is the most beautiful cap to the whole thing. 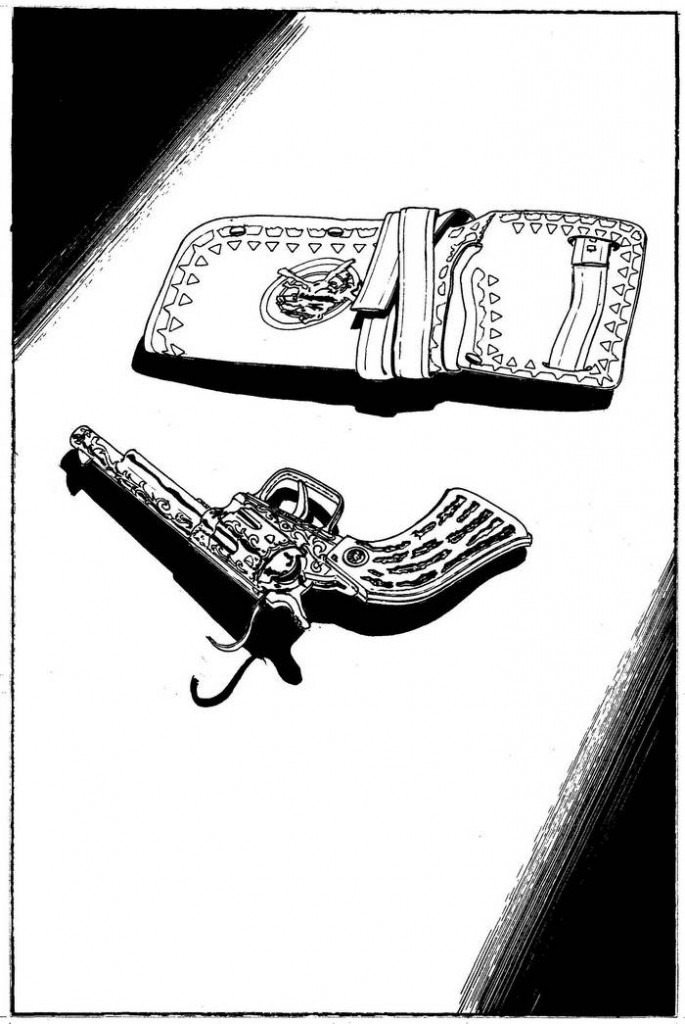 This gun shoots no known caliber, barely has sights and doesn’t even shoot what it does shoot very well.

It’s no ‘wonder nine’, accepts no scope of any kind; has no accessories for that matter, unless you count the ratty, vinyl-like holster that came with it.

It certainly isn’t gun-metal tough ; I probably could shatter it with my bare hands. It most likely would rust, if I let it. But it’s my most important gun.

When it saw its heaviest duty, it was the best gun there was. It could slide from that low-slung holster like a natural thought. It fired fifty, well-placed rounds squarely into the bad guys, whether they were gangsters or Indians or just young buddies up the block.

This was my little boy’s gun. Now I hold onto it and now and then, use it.


There's little moments like this at the back of pretty much every issue. #7 gives you a look at the safe house that the Punisher's dog Max used, before the dog got shot. #8 shows the Punisher standing in front of the Vietnam Veterans Memorial Wall. And again, this is sort of what ties it all together. You can get lost in the fun of tech specs and how lovingly crafted a weapon is designed and made, or enjoy the visceral bloody thrills as the Punisher talks about how he's used this or that, or is going to. Whatever your perspective on firearm control is, you should objectively be able to appreciate the aesthetics of design, even if you disapprove of the purpose.

Which brings me to the final thought for this thread - I don't see how this sort of comic could be published today. Image wouldn't do it, even if they had a property that had the right background for it; DC and Marvel's corporate masters would probably shit their pants at the thought of putting out a ten-issue maxiseries that was essentially a series of adverts for real-life gun manufacturers. Maybe I'm being unfair with that, but it's been a long time since the 1990, and the general acceptance of things like swimsuit issues and realistic depictions of firearms has gone down in the last decade-and-a-half - which I think is understandable, but perhaps regrettable. Do kids need to have assault weapons and handguns glamourized for them? No - but while this book may be a pin-up of bang-bang, it also sells the message on every page that guns are dangerous and intended to kill people. Frank Castle treats these things as tools because he's used to them, and trained in their maintenance, modification, and use, but even he's careful with them - he respects how dangerous they are - but it's also definitely not a gun-control magazine. The NRA would probably not put their stamp of approval on a guy that basically flounts any and all gun ownership laws because he's a criminal that has stepped outside the bounds of the law, and Disney or Warner Bros. would need their brown pants if io9 saw such a book on the shelves nowadays.

On the other hand - well, kids aren't the only audience for comic books. Never have been, really, as much as people like to pretend that funny books were always something you grew out of with puberty. If we have sexually-explicit comics on the shelves, and those with explicit language, scatalogical humor, gruesome horror, blood and guts and serious adult subjects like genocide, rape, prejudice, transphobia, alcoholism, politics, abortion, etc. discussed openly and in detail...well, why the fuck couldn't we have a gun comic, if such a comic was fit to print?
The Unpublishable - Original fiction blog, updates Fridays
Sex & the Cthulhu Mythos