Cthulhu Wars - (Chaos in the Great Old One World)

Registered User regular
May 2015 edited May 2015 in Critical Failures

Hello and welcome to Cthulhu Wars! Many of you may remember Chaos in the Old World, an old forum favorite where each player controlled a dark god vying for supremacy in the Warhammer World. Cthulhu Wars is a similar, but different game using the Great Old Ones of the Cthulhu Mythos.

Objective
Be the player with the most doom points when the game ends.
The game ends when:

At the end of Gather Power, if your Power is less than half that of the player with the most Power, set your Power to be half of his (round fractions up).

2. Rituals of Annihilation
The current player may spend Power equal to the current position of the Ritual marker on the track.
The player now advances the Ritual marker one step up the Ritual of Annihilation track, which often increases the cost for later players.
Finally, the player now advances his Doom marker on the Doom track 1 step for each Gate he controls. (doubling his Doom boost for this turn based on Gates.) In addition, for each Great Old One he controls in play, he gains an Elder Sign.

-Recruit Cultist
Place a cultist anywhere you have a unit (if no units, cultist can be placed anywhere)
-Summon Monster
Place a monster anywhere you control a gate.
-Awaken Great Old One
Your faction's special conditions for doing so must be met.
-Build Gate
(3 power) Place a gate anywhere you have a cultist. Limit one gate per area.
-Move
Spend as much power as you wish. For each power spent, move one unit one space. Each unit may only move once that action.
-Battle
(1 power) Initiate a battle against ONE other player in an area where that player has units and you have at least one combat die.
-Capture Cultist
(1 power) Capture another player's cultist if you have a monster/GOO present. Monsters block capture by other monsters, but not GOOs. GOOs can only be blocked by other GOOs.
-Unique action
Faction specific action.

Spellbooks
Spellbooks are upgrades and special abilities specific to your faction. Your faction sheet tells you the conditions where you get the earn a spellbooks. When the condition is met, choose a book of your choice. You cannot win the game unless you have all 6 books. 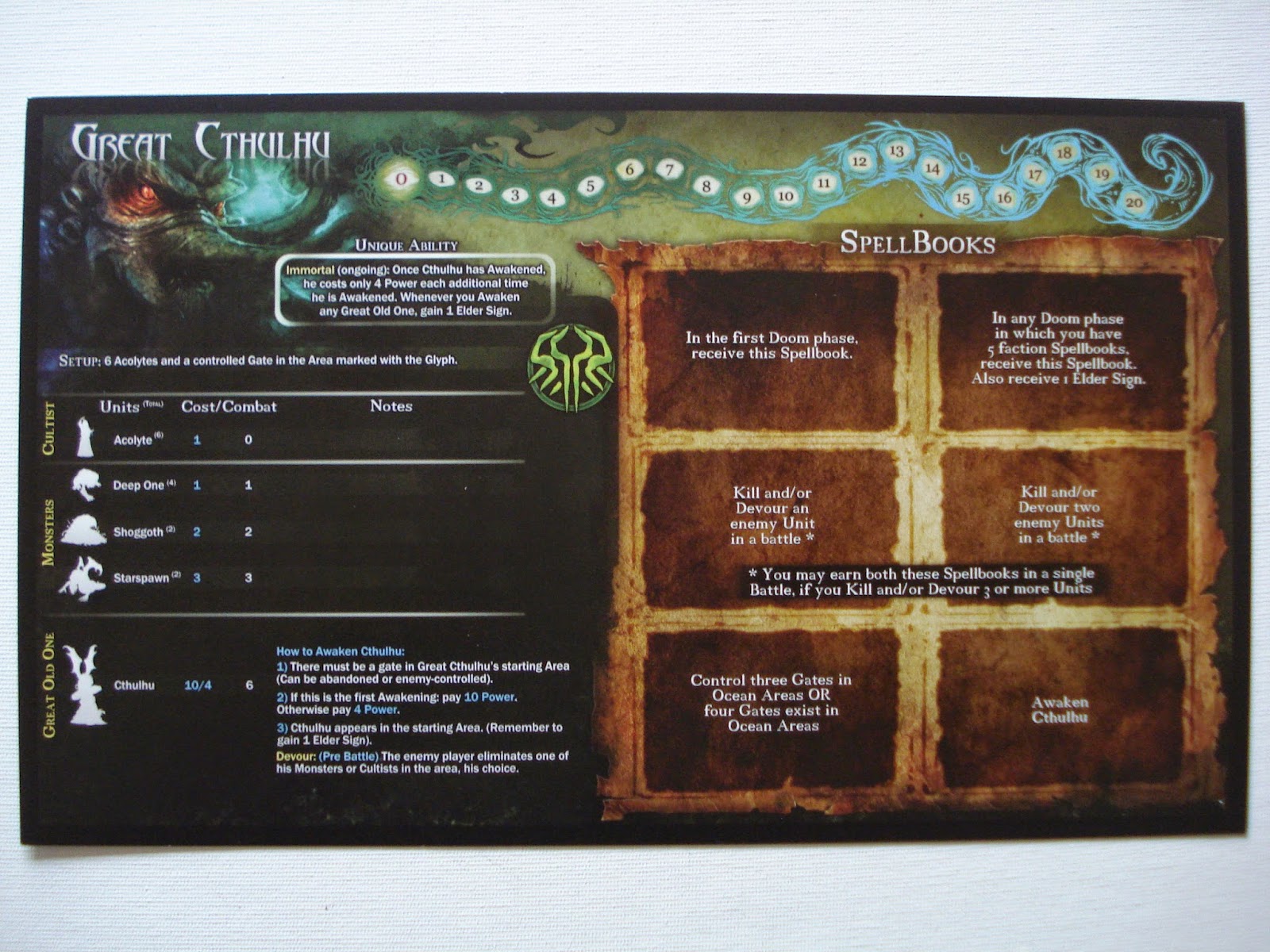 Devolve (Ongoing): At the end of any player's Action (even if it's not your turn), transform one or more of your Acolyte Cultists anywhere on the map into Deep Ones.

Absorb (Pre-Battle): Remove any of your non-GOO units from the area. For each such unit, the Shoggoth adds 3 to his Combat.

Regenerate (Battle): Star Spawn can accept up to 2 combat results. If they are both kills, it dies. On ANY other combination, it is pained.

Submerge (Action: Cost 1): If Cthulhu is in an Ocean Area, remove him from the map and place him on your Faction card, along with any or all friendly Units in the same area. On a later Action, perform Submerge again to place Cthulhu (plus any accompanying Units) anywhere on the map.

Dreams (Action: Cost 3): Choose an area with enemy Acolyte Cultists. Your enemy must eliminate an Acolyte Cultist (chosen by victim) and replace it with one of yours from your pool.

Y'ha Nthlei (Ongoing): If Cthulhu is in play you get 1 power for each Gate in an Ocean area that you do not control. (uncontrolled Gates do not count, because everyone gets one
power from them anyway, but Yog-Sothoth does count). 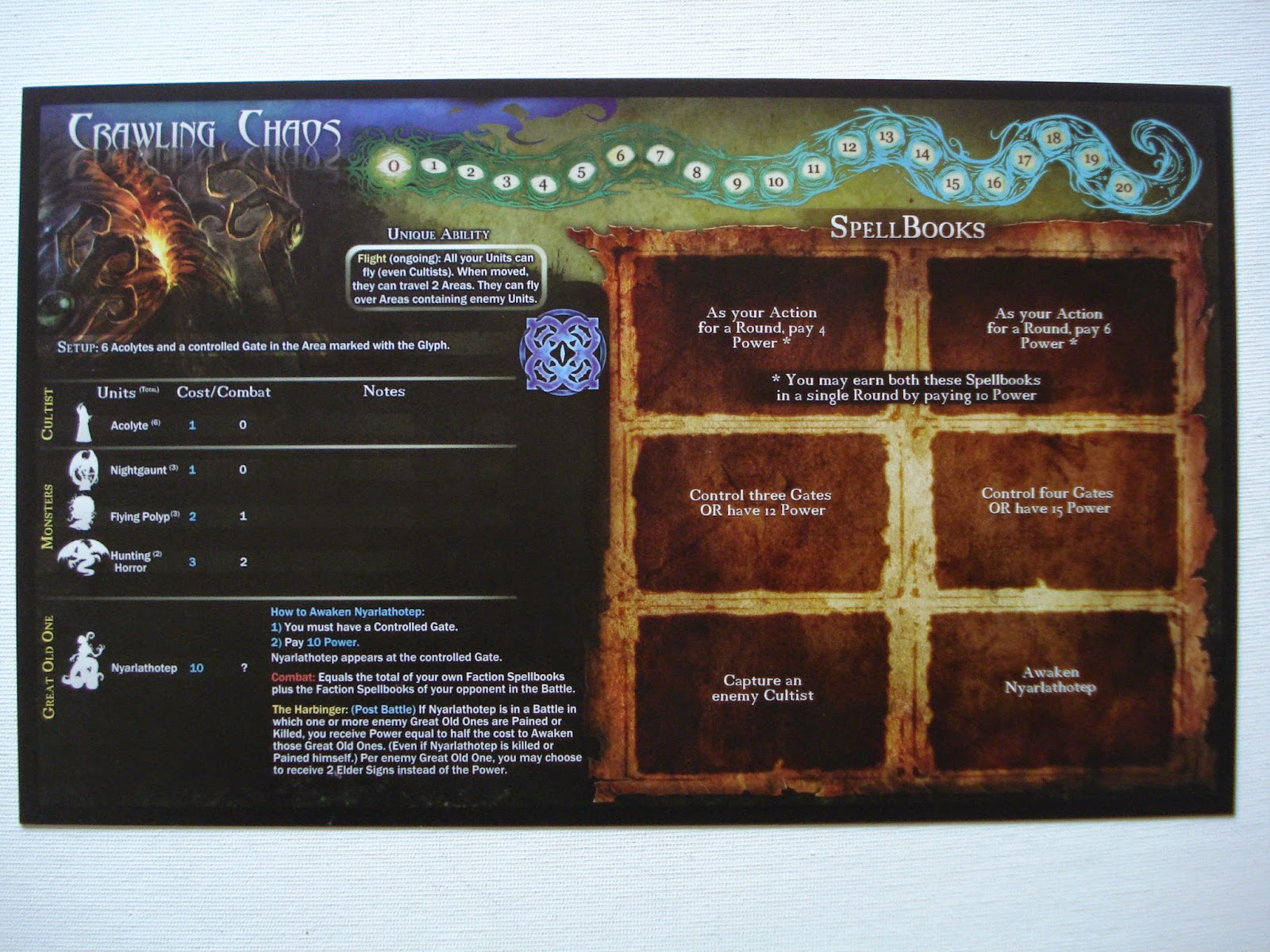 Abduct (Pre-Battle): Eliminate a Nightgaunt, your foe must eliminate a non-GOO unit in the same area.

Invisibility (Pre-Battle): Each Flying Polyp can select one non-GOO to be sidelined, and not take part in the battle.

Seek and Destroy (Pre-Battle): Whenever a battle is declared in which one of your units participates, you may move any or all of your Hunting Horrors on the board to the location of the battle.

Madness (Ongoing): Whenever there is a combat anywhere on the map, you may choose where units that are pained move to.

Emissary of the Outer Gods (Ongoing): Nyarlathotep must be in play; Unless an enemy Great Old One is in the battle, any kill inflicted on Nyarlathotep becomes a pain.

The Thousand Forms (Once-Per-Action-Round: Cost 0): Nyarlathotep must be in play; roll 1d6 and all other players have one minute to decide if they will lose that much power. If they decide not to lose the Power, Nyarlathotep gains that much Power. 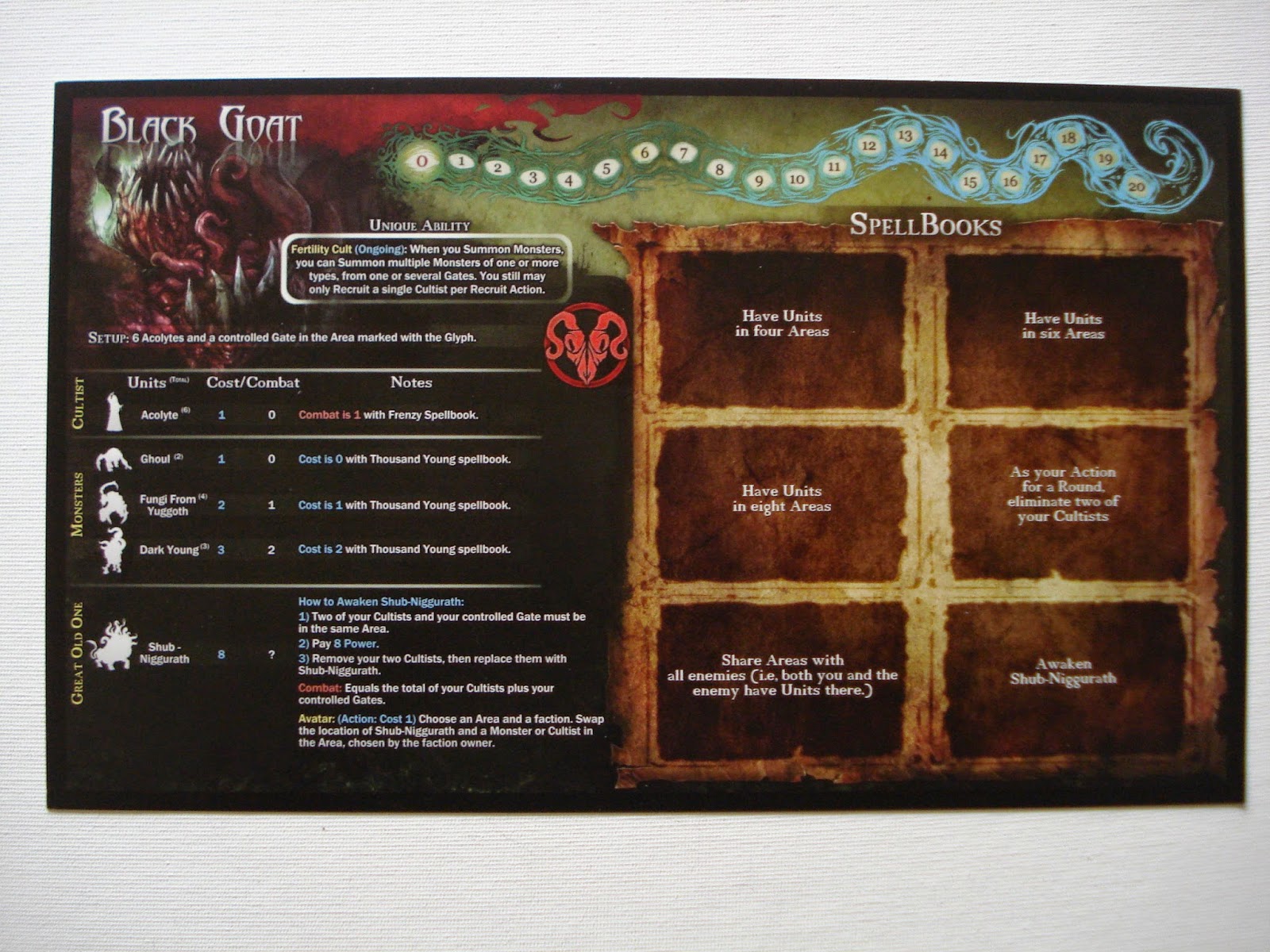 Frenzy (Ongoing): Cultists have a Combat of 1.

Necrophagy (Post-Battle): Move any or all Ghouls to that battle and apply an additional pain result to each side for each Ghoul so moved. Ghouls that are already in the combat cannot participate in Necrophagy.

Ghroth (Action: Cost 2): Roll a die. If the result is equal to or less than the number of areas containing Fungi, then your enemies must collectively lose that many Acolyte Cultists from the map. If they can't decide in one minute do it for them.

The Red Sign (ongoing) your Dark Young can now Build Gates, Control Gates, earn 1 Power each during the Gather Power phase, and add +1 apiece to Shub-Niggurath's Combat. They do not act as Cultists with respect to any other purpose.

Blood Sacrifice (Ongoing): Each Doom Phase you may sacrifice 1 Cultist to get an Elder Sign. Shub-Niggurath must be in play.

The Thousand Young (Ongoing): Shub-Niggurath must be in play. All Ghouls, Fungi, and Dark Young cost 1 less power to summon. 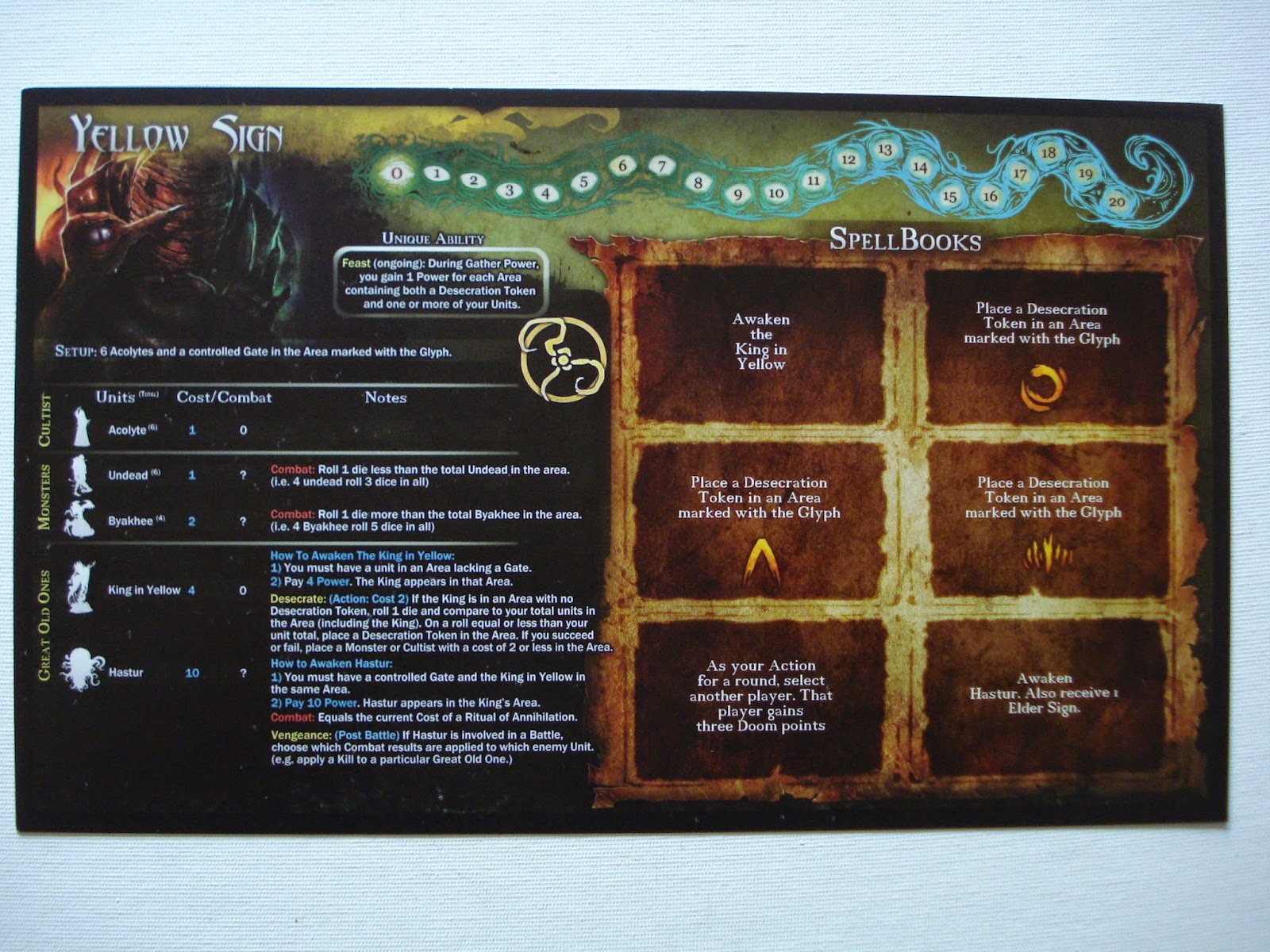 Passion (Ongoing): When one of your Cultists is eliminated by an enemy Action (Captured, Killed, Etc.) during the Action phase, gain 1 Power.

Shriek of the Byakhee (Action: Cost 1): Move any or all Byakhee on the map to any single area on the map.

The Screaming Dead (Action: Cost 1): Move the King in Yellow and any Undead in the same area to a neighboring area, you may immediately perform a second, different action (may not perform He Who Must Not Be Named as the second action).

He Who Must Not Be Named (Action: Cost 1): Hastur immediately moves to an area on the map with a Cultist. He may then perform a second, different action (may not perform The Screaming Dead as the second action).

The Third Eye (Ongoing): Hastur must be in play; Desecrate costs only 1 Power to perform, and grants you an Elder Sign when successful.

Ex. Red starts his action with 8 power. He recruits a cultist, which costs 1 power.