The Magic Circle-Trapped In Development Hell, Can You Ship a Game From The Inside?[PC,Mac] 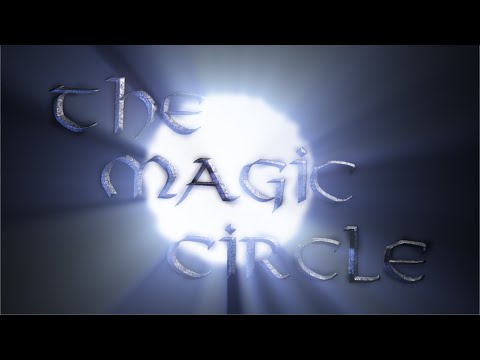 The Game
In The Magic Circle, you are the protagonist of an unfinished 1st person fantasy game, trapped in development hell. The fictional designers (played by James Urbaniak, Ashly Burch, and Karen Dyer) are god-like, but so indecisive that they've given you no powers whatsoever. With the help of a mysterious disembodied voice (Stephen Russell) you must seize the tools of game development from these unworthy 'gods', uncovering more of the darkly comic story as you go.

Rather than traditional puzzles with a single solution, the incomplete state of each environment is a question that you answer in your own way. Trap the designers' creations, steal their behaviors, and re-mix them to explore and master this world-in-progress. Can you out-think the game gods? Can you ship The Magic Circle from inside it?

The Team
We're a 4 person team, Stephen Alexander (that's me, art), Kain Shin (programming), Jordan Thomas (writing and design), and Patrick Balthrop (audio). Between us, we've worked on all three Bioshocks, South Park: The Stick of Truth, Dishonored, Deus Ex 2 and Thief: Deadly Shadows. The Magic Circle is our attempt to make something different and lighthearted, but with the systemic heart of the games we made in the past.

The Begging
The game is available now on Steam, and there is a FREE DEMO! Check it out here:

We really hope you will enjoy it!