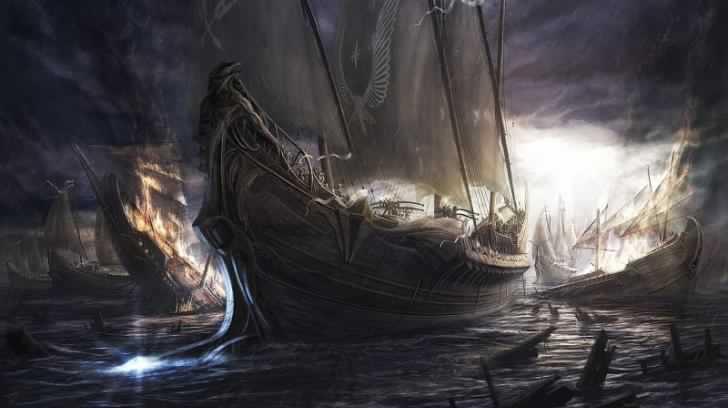 It's been weeks since the grand warship “The Dragon's Hoard” disappeared without a trace within the Iron Line. Before it disappeared, only the rare foolish ever tempted to travel across the Iron Line to the Phoenix Kingdom. Trade was unheard of because of the Wizard King's damned spell that caused the Iron Sea to spawn creatures and storms that would drowned the most sea-harden sailors. Those that had would return telling us about the Iron Line, a chain of islands that stretched forever from the north to the south between the Dragon Empire and the Phoenix Kingdom. The islands themselves were filled with strange people who would attack without cause, eat you alive, and wear your skins.

The Dragon's Hoard was more than a ship taking a large shipment of gold across the Iron Sea. It was a marvel of craftsmanship and arcane power. Built by the dwarves after the Emperor paid the Dwarf King something very valuable, the ship was the first fully metal hull ship, outfitted with the best cannons and weapons, and powered by the first Arcane Engine, a mix of magic and machine that the Archmage and his people invented. The trip was more than a wedding gift, it was a test to see if we could conquer the Iron Sea. One that, sadly it seems, we have failed.

With it gone, the old ports are opening up again. People are taking to the seas, for the Emperor or for the gold, and traveling to find the Dragon's Hoard. How many foolish people will die for this ship, I can not say. But it does make for an exciting news, now doesn't it?

-A letter from Lord Parish to an unknown person, published by the Axis Times Newspaper.

The Dragon Empire had held good relations with the closest neighbor, the Phoenix Kingdom, since the fall of the Blood-God King in the 6th Age. Before the Wizard King of the 12th Age cast a spell across the Iron Sea, trade between the two nations were common place. Afterwords, the two nations could only keep in contact through magic mirrors.

Now the Emperor's oldest son is to be wed to the Phoenix King's only daughter, in the hopes of binding the two nations together. But as Phoenix Traditions goes, to wed a daughter, the son's family must send a wedding gift equal to the daughter's worth to the daughter's family. And thus The Dragon's Hoard was created. A massive Warship, one of the first of the age to be fitted with a metal hull, it was designed by dwarves to take the beatings that the now savage Iron Sea is known for. To power the massive ship, the Archmage and the Wizarding University created the first ever Arcane Engine, part machine, part magic, to help get the Dragon's Hoard through the dangers as fast as possible. But now the news is that the Dragon's Hoard is missing, and all attempts at scrying the location of the ship have failed, has set both nations into a frenzy. Everyone from simple fishermen, sellswords, pirates, and even the Emperor's Right Hand have chartered ships and are heading to the Iron Sea in search of the ship.

We can play this two ways.

The Emperor's Envoy- As agents of the Emperor, you have been tasked with tracking down and finding the Dragon's Hoard. If the ship is still operational and/or the gold is salvageable, you are to bring it and the gold to the Phoenix Kingdom.

You will start with 1 positive or conflicted Icon Relationship with the Emperor.

Pirates of the High Seas- You are part of a small Thieves' Guild that is trying to make a name for itself. Getting the Dragon's Hoard would be a big start. Your boss wants you to get the Dragon's Hoard and if it works, bring it back to him. If it doesn't, gather as much gold as you can and return with it.

You will start with 1 positive or conflicted Icon Relationship with the Prince of Shadows.

When expressing interest, say if you want to be play The Emperor's Envoy or Pirates of the High Seas. The most votes will be the style we will play. After that, make a 1st level character using any of the 13th Age books (Core, 13th True Ways, Midgard and 13th Age Bestiary, ICON Magazine). Any other sources, you can ask. I most likely won't say no.

Changes to the Game Play

One of the things I've done with my group and I think it will work well here is ICON Tokens. Instead of doing the books Icon Relationship, you'll get an Icon Token for each Icon and the points you have with those Icons. So if you have 2 positive Points with the Emperor and 1 Negative with the Lich King, you'll have 2 Emperor Tokens and 1 Lich King Token. Much in the way of Destiny Tokens in Fantasy Flight Game's Star Wars, Plot Points in Marvel Heroics, and Fate Points in FATE, these allow you to change elements of the story based on your relationship. You can spend your tokens to do the following:

When you spend your token, roll a d6.

After a long rest, you gain all your tokens back.

Eir Nobeard Dwarf Necromancer, cursed with an amulet that drains life from her.
Targath Darksong Tiefling Bard who escaped alive from the Black Scale Pirates.
M. Barrett Flint, Gnome Rogue, Tinker and the first non-dwarf to make it through Jedna's Folly successfully in his own craft. Dwarves aren't happy (which is an odd emotional state for a dwarf).
Ratatoskr, a talking Squirrel Druid shifter who once was a companion of the High Druid herself, but now strikes out on its own!
Baris Abmon, A.K.A The Grax!, Human Barbarian with split personalities and a few potions with crazy effects.
Travis McCleod Wood Elf Ranger searching for clues to the destruction of his home.
Amelia Roberts
Level 2 Fighter

One Unique Thing: Vengeful wife of a dead Pirate Captain.

Quick to Fight: At the start of each battle, roll initiative twice and choose the result you want.
+1 Bonus Feat

You start with nine recoveries instead of the usual eight

Whenever an enemy attempts to disengage from you, it takes a penalty to its check equal to your Dexterity or Constitution modifier, whichever is higher.
The penalty doesn't apply if you are stunned, grabbed, or otherwise incapable of making an opportunity attack.

Comeback Strike (+ Adventurer Feat, no -2 penalty)
Once per battle as a free action, make another attack with a –2 penalty after your first fighter attack during your turn misses.

Counter-Attack
Once per round when the escalation die is even and an enemy misses you with a natural odd melee attack roll; you can make a basic melee attack dealing half damage against that enemy as a free action. (The attack can't use any limited abilities or flexible attack maneuvers.)

Tough as Iron
Once per battle, you can rally using a quick action instead of a standard action.

Equipment:
Longsword
Flintlock Pistol
Leather armor
Chaos Pistol +1
This pistol reloads itself.
Monstrous Noise (Recharge 16+): Lower Mental Defense by 2 for the rest of the battle to deal double damage this turn with this weapon.
Quirk: Hears whispering from unknown sources.

OUT: Girl from the 21st Century