Registered User regular
July 2016 edited May 2017 in Critical Failures
The Merry Freebooters of Ditchwater
or, the Diverse and Sordid Adventures of those who, Being in Dis, resolved Still to Be 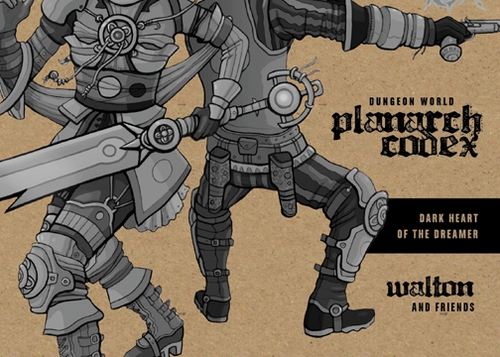 When you select "New Game" from the opening screen,

Dis, the grand and terrible, the Sultana's jewel and her curse, the last bastion and the first destroyer.

If I said "Sigil: City of Doors" or "The Citadel" or "The Gallimaufry" or "The Infinity Fair", you would probably be picturing something like Dis: a grand confluence of civilizations, of styles and cultures and peoples and goods and hopes and dreams. A city of cities.

Of course, there's a catch to Dis that you're probably not picturing. Would it help if I said "Traverse Town"? Perhaps a little; everything in Dis has survived some great calamity to be there. But that calamity is, well, Dis. Dis touches other planes through their cities, but eventually, inexorably, it devours them, and no one knows what happens to the parts of those cities that don't survive the process.

There are two truths to Dis: there is always more and it is never enough. New bits of cities pop up in Dis all the time, creating new "parishes" - little capsules of past civilizations with their own confused people, who rapidly become just more people. But all those people need things. Food, clothing, shelter, and whatever else. When they lived in cities, those things would come from the country. When they live in Dis? Well, in part, those things come from you, freebooters.

When you wish the OP would cut out this metafictional BS,

Alright, cool. This is a game of Dungeon World. Play-by-post, and all of that. It's about a free group of adventurers in the interplanar nexus/prison/parasite/whatever of Dis, the weird contracts they have to take on in order to make ends meet, the strange and deadly places they have to go to fulfill them, and the many odd misadventures they have trying to get the job, do the job, and get paid.

But it's kind of a superset of Dungeon World.

What class can you play? Subject to GM approval, you can have any playbook you want, as long as it's publicly available. The basic playbooks from http://www.dungeon-world.com/ are available, of course, but if you've got a particular offshoot you want to play, just run it by me. Here are some ports for a Planarch superhero game which are perfectly good classes in their own right (just ignore the part about character creation) and here's a roster from Inverse World with some special guests. (Playbooks provided for purposes of forums game only, all rights reserved to the original publishers, please do not freely redistribute.)

You'll be a starting character as far as gear selection and all that goes, but you'll be starting at level 2, which means you get 1 move off of the advanced list for the playbook, and can pump a stat by 1 -- if you do it to your 8, 12, or 15, that'll bump the bonus up 1, which is the thing you'll be actually rolling. Or you can bump your 16 and shoot for 18 assuming you live to see level 3. There are a couple of other special caveats, such as:

What race can you play? Well, if you look at the hero hack, you'll see they don't have racial moves, instead having a heritage section. Think of it as kind of like a druid shapechange except you're changing into yourself - roll +WIS at a session boundary or whenever you exercise your rites of blood and tradition to get hold, and spend it to exercise your heritage, just like that. As you gain a new appreciation for your heritage, you can change or add moves to the list of things you can spend heritage hold on.

What race are you? On Dis, any old words for that you might know are starting to lose their meaning. Love is hard to find, and any two* thinking beings determined enough to bring a child into Dis aren't going to run short of determination when it comes time to find a way to create that child. Not that you can't have come about the conventional way, but if you want to be the product of an affair between a sentient shade of blue and a particularly astute tree frog, that's fine too. The only limitation is: you have to link a picture of yourself. Work-safe, please and thank you.

How crazy can you get with your past? How wacky is too wacky? Well, just keep in mind, whatever you make, they are still residents of an all-devouring interplanar prison. As long as you make somebody who could say that "Dis, the grand and terrible" line and sincerely mean it, you're safe.

How do you come up with heritage moves? Well, I'll be glad to do that for you, just tell me some interesting things.

Tell me the thing one parent most wanted to pass onto you and why.
Tell me the greatest thing another parent ever did and why only they could do it.
Tell me the one thing you'll always remember about the parish where you grew up.

(*Or more. I'm not judging. Or perhaps less? Perhaps even, given the weirdness of all reality, none at all? You'll still have to tell me three interesting things, but you can substitute other formative figures during your early years.)

What about bonds and alignment? Those are going to work a little bit differently. You know how advantage works in the new D&D right? Roll 2d20, keep the best?

Alignment's simple. Just pick it from your playbook options as normal. And when you draw on your alignment to do something to further it, and your alignment isn't exhausted, roll with advantage and then exhaust your alignment. You'll refresh it at session break to roll it again. Or, if you haven't exhausted it by then, maybe pick a new one?

Bonds are a little more complex. You won't start with any of them written out. I mean, you can plan who else they might be with, that's cool. When you draw on a bond with someone to help them, pick an unexhausted bond of yours. It's with them, so mention how it applies, then exhaust the bond. They'll roll with advantage.

Or if they've already rolled (not with advantage) and the total was a 6 or 9, you can "save them". Or, y'know, try. Same overall shape, pick a bond, mention how it applies, exhaust it. Then you roll 1d6, and it replaces one of their d6. Yes, no matter what. And also, you're in the soup with them, whatever the final result winds up being.

Exhausted bonds will refresh at a session break, and you can rewrite one or more of them if the situation has evolved.

Just one rule. You can't have more than half your total number of bonds (rounded down) dedicated to any one person at any one time.

Scenario Creation -- Love Letters from the Heart of the Dreamer

And now that we know what you are and who you are, let's set you up inside the company. When you sign up, decide what role you're going to take, and make its associated move. You can choose freely! ...well, almost freely. Whoever gets the first pick is in charge of The Job. It's what you get for volunteering.

Now, as play opens, you'll be coming back to Dis after having done The Job, so you'll have to make a second roll for how the job went, which I'll detail once the first roll shakes out.

Everybody else, pick one of: The Kip, The Noise, The Spects, The Score. We'll be capped at 5 players, at least to start with.

The Kip is where you crash when the job's done. It's in Ditchwater, which unusually for Dis is exactly as hospitable as it sounds. It's the sort of place people with as much money as you set up shop so they can become people with more money than you. Well, or dead. Or worse.

When you take charge of The Noise, tell me about the group that most fancies themselves your rivals or opponents, friendly or otherwise. They could be another group of freebooters, or a gang or cult or minor guild. How do they identify themselves? When did your rivalry start? What are they usually up to? Also tell me about how you usually keep an eye out for them, pick a fitting stat, then roll and add it. On a 10+ they've been largely quiet. On a 7-9 they're up to their usual tricks. On a 6- I'll introduce some new power that's taken you by surprise while you had your attention elsewhere. That's the thing about The Noise. There's always more.

The Spects is your edge in getting future work. You're only worth as much as the next job, after all.

When you take charge of The Spects, tell me about the thing you have that's totally going to be the key to lining up some nice jobs in the future. Some object that'll let you explore planes few other people can? A secret that few other people know? Contacts that few other people can access? Also tell me how you set it up and maintain it, pick a fitting stat, then roll and add it. On a 10+ it's given you a solid lead that the group might choose to pursue right away. On a 7-9 you'll need to do some legwork, same as always. On a 6-, things have gone dry and I'll tell you why, and give you a lead on a new set of spects.

The Score is how you get paid. Dis operates on the silver standard, and there's generally a ready supply of coins stamped with the Sultana's face. But the thing with silver is it's impersonal. That is, it's not necessarily tied to your person, and if anyone were to, say, steal or loot it, it would work fine for them. Therefore, often in Dis, and more often in Ditchwater, payment is done in barter or in more esoteric currencies, like keys to safe storage in the Infinite Vault or ceramic gaming chips from a variety of chance palaces.

When you take charge of The Score, tell me about the weird way you're getting paid and how you negotiated payment. Pick a fitting stat, then roll and add it. On a 10+ what you get paid in is largely interconvertible with the coin of the realm. On a 7-9, tell me who you have to see (or what you have to do) to cash in your payment for something people will more readily accept. On a 6-, I'll tell you.

I'll keep signups (!signup when you post) open for at least 24 hours, and/or for 6 more hours after I get a fourth person.
(legacy)The Merry Freebooters of Ditchwater -- Dungeon World - Die, Monster! -- Inverse World - The Princess's Expedition
Glazius on May 2017