Long Island, NYRegistered User regular
November 2017 in PAX Unplugged
(Posted this with approval from Tube and zerzhul since I wasn't sure it was allowed)

Suicide is never an easy topic to discuss because chances are, you've been affected by it. As a survivor myself, I know this all too well. What I have noticed over the last few years is as the nerd/gaming community has grown and developed, we have become more open and more welcoming of these hard conversations. Mental illness is something that needs to be discussed and addressed as openly as we do here. There's even a panel on RPGs and therapy friday night (which I hope I can make)! All of that being said, there's a reason I started this thread - A friend of mine in the D&D community recently lost her 17 year old son to suicide. She has asked that people include him in their games, maybe as an NPC or as their PC and to post the story of his adventure on social media with the hashtags #WyattNPC or #Play4Wyatt. I have 1500 business cards coming in that I will be handing out randomly to anyone that will take one, to help spread the word. If anyone in here is an exhibitor/vendor or has any other kind of table and wants a stack, please let me know. I will be working at a booth myself on friday and sunday, but am an attendee all day saturday. You can contact me here, or via twitter I suppose where I know I'll get the notifications during the day - @jess_dempsey

Anyone interested in using his likeness for commercial related items can contact me privately with what you wish to do. So far his mother has approved all requests for his name and image to be used, I imagine the approvals will continue. Stock art is being distributed by fat dragon games, others are creating roll20 tokens, and a mini was just designed via heroforge. Multiple publishers (four currently) are also including him in their products.

description of card in case the images below aren't loading quick enough -
front: image of Wyatt in his ren faire costume where he performed with his longsword on the left, #Play4Wyatt and #WyattNPC on the right. Forest background
back: On October 30th 2017, 17 year old Wyatt Ferris took his life after suffering a traumatic brain injury that prevented him from continuing his pursuit of baseball as one of the top prospects in Texas. To help deal with the depression, anxiety, and panic attacks he endured as a result, Wyatt became very active in the gaming community and spent countless hours at the table, both as a GM and as a player. Wyatt was a paladin, cavalier, war priest, rogue, swashbuckler, Hellknight bodyguard, and so much more. To keep his memory alive, his family asks that you include him in your games, and share his adventures on social media so they can follow along with the hashtag #Play4Wyatt if you use him as your character , and #WyattNPC if you include him in your story. Through our games, Wyatt will live a million lives across a million stores, each one more wondrous than the last. If you need help, don't be afraid or ashamed to reach out. Every life is important. Suicide Prevention Lifeline: 1-800-273-8255 suicidepreventionlifeline.org 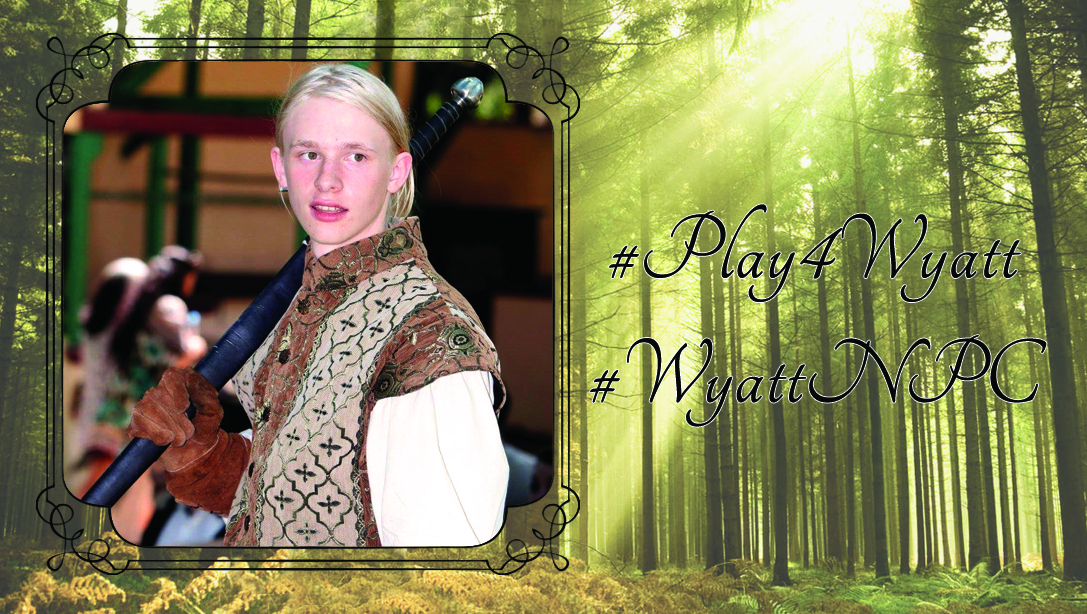 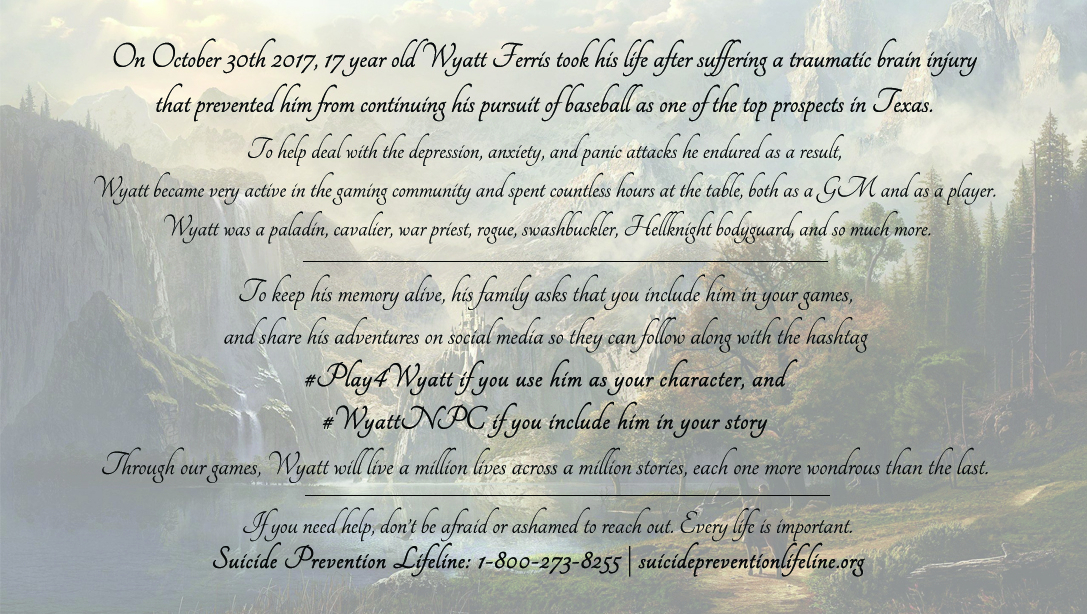