Registered User regular
November 2017 edited November 2017 in Graphic Violence
I didn't want to do this in the regular DC thread because 1) there may be spoilers, 2) there will be griping, and 3) it's more meta than just the DC comic series.

For anyone that hasn't been paying attention, DC's Rebirth storyline of the last couple years is reaching its culmination in Doomsday Clock, which is a crossover between the Watchman graphic novel by Alan Moore and Dave Gibbons and the mainstream DC universe. If you're unaware why that should be any issue at all, I would recommend Chase Magnett's excellent series that goes over the issues: http://comicsbulletin.com/case-doomsday-clock-part-one-history/

The very tl;dr: Moore and Gibbons created one of the greatest graphic novels of all times, but were screwed out of the rights to their creation. And this is nothing new. DC, since they still own the rights to Watchmen and all its characters, is moving forwards with new stories involving them because, well, they like money and they can. Nothing illegal.

Which brings us to what I actually want to talk about, which is less Doomsday Clock itself - which might be great or it might be crap - and the overall difficulties of business and intellectual property that is comic books itself. Doomsday Clock is ultimately about the fans...because we are the consumers that this sort of thing is marketed to and who pay for it.

One of the great things about comic books, as a medium, is the ability to tell many types of stories over long periods of time. Our attention as fans may be drawn to specific creators or specific characters or both, but from an historical perspective it is the characters that tend to win out in the popular imagination. The men and women behind the pens and typewriters tend to be invisible, the characters on the published page are all. So a cartoonist may die, or retire, or be fired, but their creations live on - and this can be amazing, when those creations interact with other creations. To see Superman team up with Batman, or the X-Men fight the Avengers, is to witness something that was almost inconceivable in any other media. People in the early 1900s just didn't have Sherlock Holmes fight Fu Manchu, people in the 1800s didn't have Don Quixote fight Frankenstein's Monster and Dracula. The idea of an artificial mythology, of a shared setting, of characters that lived and persisted beyond their creators was just a very rare and bizarre thing...and comics made it work.

It made it work at the expense of the creators themselves. Characters like Superman and the Fantastic Four have made millions and millions of dollars...for DC and Marvel Comics. The epic, sprawling universes of heroes and villains, aliens and adventurers, are all work-for-hire...and there's no old comic writer/artist's retirement fund, so to speak. The creators generally don't get royalties and residuals for their work, no matter how much money the executives and investors at the companies make. This is all totally legal. But is it right?

Ethically, no. There's widespread evidence that Marvel, DC (and Disney, Warner Bros, etc.) for decades worked deliberately to diminish the footprint and claims of individual creators while maximizing their profit and ownership. That's just good business sense - but even then, they took it too far, because their outsized position in the rather small field of comics meant that if you didn't work for the Big Two, you basically didn't work on any lucrative basis. The indies were, by and large, associated with poverty - and to a degree, still are. While there are individual success stories like Dave Sim (creator of Cerebus the Aardvark), there are always harrowing tales like Steve Gerber (creator of Howard the Duck), and how they struggled for any control or fair profit from their creations.

It's one of the hardest lessons of any fan: there's always a point where you have to grow up, and realize that the world is not full of black-and-white morality. The Punisher does not kill the executives of comic companies because Jack Kirby, Jerry Siegel, and Joe Shuster's heirs had to sue their parent companies to reclaim a fraction of the monies and credit they should have originally been due. The writers and artists behind Doomsday Clock are not scabs or unethical shills for doing what they love and creating comics. It is sad that, one of the things that is most awesome about comics, the ability to create these sprawling mythologies and shared universes, is built up on a legal framework of denying ownership to creators and maximizing profits to the parent company.

There's not a good solution. A boycott of Doomsday Clock is not going to make DC "do the right thing," even if everybody could agree on what "the right thing" was in this case. Because it's more than just Alan Moore and Dave Gibbons involved: DC has done this kind of thing before, with the Before Watchmen series and the film, and the manifold different versions of the graphic novel. Hell, there was even a Watchmen RPG supplement. So there are other creators that worked on and profited from and, arguably, have a stake in these expanded properties. What happens if DC gives Watchmen back to Moore and Gibbons? Shouldn't they have priority over these others that profited off their work with for-hire additions?

And maybe more importantly: would Watchmen stay in print? The only reason Doomsday Clock has the media attention it does is because of the literary strength and legacy of Watchmen - a graphic novel which can be (and has been!) a textbook for university lit classes. One of the few that made people sit up and realize that graphic novels were a thing, and helped to spread legitimacy to the entire media as more than just kiddie-fair. The only reason DC retains ownership of Watchmen is for the money it gives them. That's it. They're not keeping it in print for its literary merit, or to screw over Moore and Gibbons out of some raging decades-long grudge. They're not publishing Doomsday Clock because it's some fascinating twist and expansion of Watchmen's literary legacy. This isn't about love or higher purpose. It's about the money. DC's motives are as pure and straightforward as any other prostitute's. DC does this kind of thing every week, pissing over some creator's legacy. The only reason it's visible is because Watchmen is visible.

So...this isn't a call to arms, and this isn't a rag on Doomsday Clock from any sort of artistic or literary level. I personally wouldn't have worked on that kind of project, but I don't have a career in comics. If I was being paid to write or illustrate, I might have different scruples. Maybe some people were really intrigued about the concept, and are determined to "do it right," whatever that means to them. Only the end result will tell us if Doomsday Clock stands or falls on its own merits.

I'm not going to buy it. I don't like it, even from a purely narrative approach. I think it's a poor creative decision - a cheap grab for headlines, and ghost knows that Marvel and DC have done far too much of that lately. I ceased following the big events because I got frankly exhausted with this kind of crap. Doomsday Clock isn't aimed at me, and I really like Watchmen. That's okay. This isn't a boycott, because I don't think a boycott would work, and if I was going to boycott, I'd have to boycott all of DC and Marvel's comics, because there is nothing particularly noteworthy about how DC is screwing over creators in this particular incident - it's just more egregiously visible than normal. So this is...just a surrender to the idea that we are all, have all always been complicit in the exploitation of creators, because we buy stuff from the people that exploit them. I'm not going to buy stuff I don't want to read, and I don't want to read Doomsday Clock. You might feel differently, and that's fine. You might read it and really like it, and that's fine too.

I think it's good to be aware of the controversy surrounding it, in the same way you're aware that the cheap clothes you get at Walmart are the result of sweatshops in China and underpaid workers that rely on Medicare and government assistance because Walmart's price structure requires them to have as few full-time employees as possible. Comics are a business, not just a creative expression, and as Jack Kirby once put it... 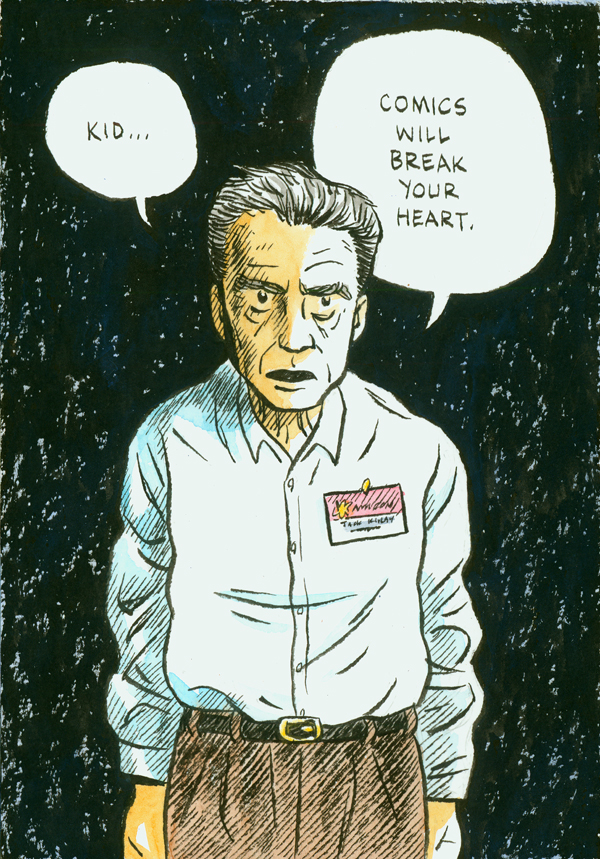