Registered User regular
May 2019 edited May 2019 in Critical Failures

Overview
In For-Ex, players are powerful and influential traders playing the currency exchange markets. Through the course of trades, investments, and divestments among seven currencies, the winner at the end of the game will be the one who has turned their starting capital of 2 units in each currency into the most valuable total holdings. 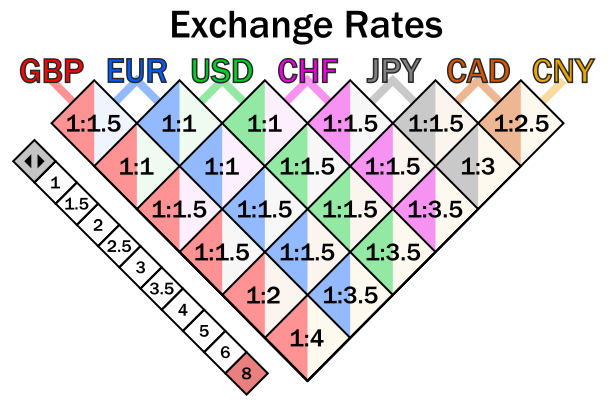 At the core of the game is the currency board, showing the exchange rates between the seven currencies in the game. Every currency pair has a specific exchange rate, their starting values noted in the table above. In each pair, there is one currency that is noted as stronger by the colored arrow; this holds true even for currencies with a 1:1 rate. Over the course of the game, these exchange rates will change according to the line running down the left side of the chart. The numbers in the boxes indicate how many units of the weaker currency can be obtained for each unit of the stronger currency.

Turn Flow
At the start of a player's turn, they may optionally perform a spot transaction. Whether or not this is done, the player takes one of the following actions, then the turn passes to the next player:

Spot Transaction
In a spot transaction, the active player will make a small trade of currency with one of the other players in the game. This trade will only involve one unit of the stronger currency, and a number of units of the weaker currency as dictated by the Exchange Rate board.

The spot transaction must be approved by both parties in order to occur. Feel free to discuss spot trades when it is not your turn; trades that are approved will be executed at their earliest opportunity unless a conflict occurs (e.g. one player agreeing to multiple trades simultaneously).

Making a Contract
A contract is an agreement to give a certain amount of currency to the bank in exchange for the amount of a second currency according to the Exchange Rate board. This agreement will not be executed immediately: instead, the contract will be placed at the end of the Contract Queue where it can be completed with the Resolve action. For a contract to be valid, the number of units of the stronger currency must be a whole number between 1 and 10 (inclusive).

For example, if the current exchange rate is 1 EUR : 1.5 JPY, then the following contracts could be made:
Contract: Pay 2 EUR to gain 3 JPY. OR
Contract: Pay 7.5 JPY to gain 5 EUR.

A maximum of six contracts can be active at any time. If the Contract Queue is full, then no new Contracts may be made until one is resolved.

Investing in Certificates
When the investment action is taken, the acting player pays 2 units of currency to the bank in order to receive one Certificate corresponding with that currency. A player can purchase Certificates of one or two different currencies in a single action, but not two Certificates of the same currency.

When a Certificate is purchased, the corresponding currency is immediately Strengthened. Holding Certificates are also important when it comes to resolving Dividends from the Contract Queue, as this will result in gaining currency and potentially strengthening a currency further.

There are up to eight Certificates of each currency available; six Certificates of the total fifty-six (8*7) are randomly selected and removed at the start of the game, leaving fifty for players to purchase. Each player may hold a maximum of four Certificates of a particular currency, but there is no limit to the overall number of Certificates that can be held.

For each Certificate sold, the corresponding currency is Weakened by one step. This means that a currency can weaken drastically with a single action. The Certificates that are sold are removed from the game: this means that there are limits to the number of investment and divestment actions that may be taken throughout the game.

Resolving
When the resolve action is taken, the topmost item in the Contract Queue is removed from the queue and resolved, regardless of whom the item applies to. The resolution depends on the type of item: Dividends, Contracts, and Loans.

In addition to gaining dividends, the currency for which players own the most Certificates will be Strengthened one step. In the case of a tie, the acting player decides which of the tied currencies will be Strengthened. Unlike Invest/Divest, there is no corresponding Weakening event paired to this one.

Contract
Contracts that were made with an earlier action are now carried out: the player who made the contract must pay the promised currency to the bank for the promised returns. A completed Contract opens up a slot for a new Contract to be made.

If the player is unable to make the promised payment, they still receive the promised returns, but the Contract becomes a Loan. In this case, a Loan is added to the end of the Contract Queue, where there are no returns, but the player must now pay the original amount plus 1 unit. (e.g. A 2 EUR payment will become a 3 EUR payment for no further returns.) If that player already has a Loan in the queue, a second Loan is not created; instead, both outstanding amounts must be paid at the same time as the original Loan. A Loan takes up a slot in the Contract Queue that might ordinarily be filled by a Contract, which means that one fewer Contract may be active until the Loan is resolved.

Loan
Loan payments must be made immediately upon resolution, and open up their space in the Contract Queue to be filled by a new Contract. However, if the player is unable to fulfill their obligation, they will go bankrupt and the game ends immediately; that player is ineligible for victory, even if they would otherwise have the largest holdings.

Ending the Game
As suggested above, the game can end in one of two ways following a Resolve action: In either case, players convert their money into the strongest currency as much as possible (no fractions outside of the Exchange Rate table) and the player with the highest total wins the game. The strongest currency is defined as the one with the largest number of currency pairs in which it is stronger. In the case of a tie, the tie is broken towards the currency with the highest number of Certificates in players' hands; any further tie is broken by the player with the last turn.