[OOC] Mage: The Awakening - The Carnival of Madness [PBP] 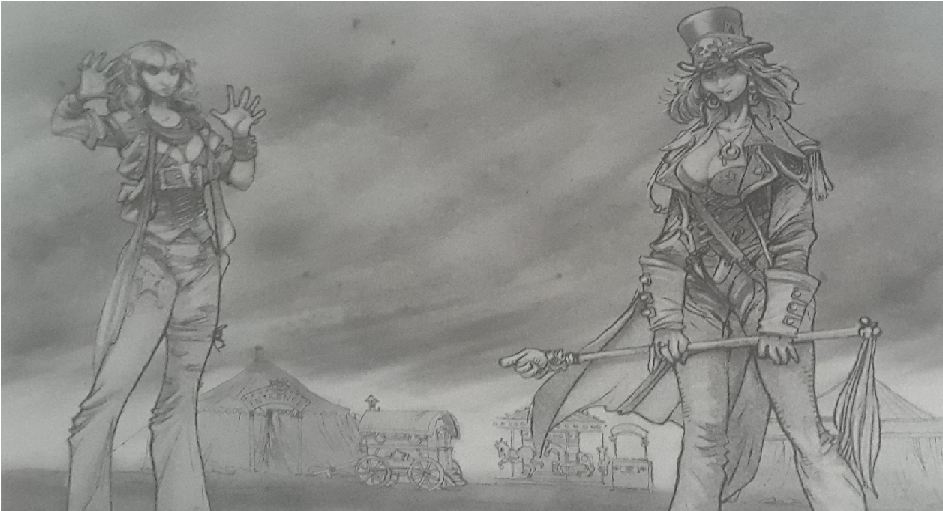 It's known to some as 'The Carnival of Innocents', or so the troupe is known by.

The Pentacle calls it something else: The Banishers' Banquet. Mages go in, and they don't come out.

This time it's going to be different. The local Consilium is aware that they're coming.

And they're going to put a stop to them.

That is... if you're willing to help.

The Carnival of Innocents is a known Banisher cabal that leaves ruin in their wake: they kill first, and don't ask questions. They just want Mages dead.

Their next destination is an open field on the outskirts of Las Vegas, and the local mages know they're coming. They're ready and waiting.
Or are they? Is such a thing even possible?

It can't hurt to try, especially if you're in for the hunt.


Backstory
Magic exists. Once upon a time, it was the driving force behind ancient societies, and was wildly practiced in public and secret alike.

However, something went wrong. A select few aspired for more, and attained powers beyond earthly comprehension. In so doing, they left the mortal planes torn asunder.

The few who ascended gained godlike powers and rose to the station of The Exarchs. Shortly after ascending, they cast the rest of humanity down into the fallen world. Separating the fallen and the higher realms is a vast maw called The Abyss; where shadows, beasts, and all manner of unclean entities reside.

Anyone practicing magic in the fallen world without proper regard for the limitations of normalcy and reality can expect to get backhanded by a nasty force from The Abyss known as Paradox.


This means magic, once widespread amongst all, is now only practiced by a scarce few, and has to be done largely in secret. Worse, the servants of The Exarchs are many, and seek to keep magic away from the common people. These servants, known as the Seers of the Throne, believe common people are sheep and lack both the right and capacity to use magic.

Player characters take up the role of Pentacle Mages; those who were left behind when The Exarchs ascended, and want magic to be brought back to the common people.

This is no easy feat, of course, since Pentacle Mages not only have to contend with the machinations of the Seers and a magic-ignorant populace, but also the ever-present threat of Paradox, the Abyss, fallen Mages known as Scelesti, and all manner of unknown mystical threats. When a magic-ignorant human learns of magic and becomes open to its use, they 'Awaken'.

The reasons for Awakening vary from character to character. Sometimes it was a mundane traumatic experience, sometimes it was a chance encounter with a magic-wielding character, or possibly some other supernatural entity.

Whatever the cause, Awakenings also cause different sorts of magic to be accessible to a newfound Mage.

There are five paths in all, each with different specialties and weaknesses.

Enchanters on the Path of Thistle work with luck, intuition and destiny.
Their awakenings tend to involve Arcadia: the realm of the Fae.

Connected to the Watchtower of the Lunargent Thorn in the Realm of Arcadia.

Generally associated with the Fae, and the Tarot of 'The Fool'.

Warlocks on the Path of Scourging work with perception and inner demons.
Their awakenings typically involve demonic or occult encounters.

Connected to the Watchtower of the Iron Gauntlet in the Realm of Pandemonium.

Generally associated with manipulation, subversion and the Tarot of 'The Devil'.

Necromancers on the Path of Doom work with death, mortality and material things.
Their awakenings usually involve death and encounters with the other side.

Connected to the Watchtower of the Lead Coin in the Realm of Stygia.

Generally focused on the study of transition and decay, and associated with the Tarot of 'Death'.

Theurgists on the Path of the Mighty work with the divine energies infusing the world.
Their awakenings are typically involve flashes of divine providence, such as from angelic beings.

Connected to the Watchtower of the Golden Key in the Realm of the Aether.

Generally associated with the pursuit of power, and the Tarot of 'Strength'.

Shamans on the Path of Ecstasy work with all aspects of the natural world.
Their awakenings tend to involve the wild jungle. Think Jumanji.

Connected to the Watchtower of the Stone Book in the Realm of the Primal Wild.

Generally associated with the wilderness, and the Tarot of The Moon.


Once a Mage has ascended to their Path, the next thing that often happens is taking their place in modern society. This usually means deciding their role within The Pentacle; no easy feat.

The Pentacle originally consisted of four orders, but in modern times, a fifth has recently formed, largely consisting of younger Mages who wish to break with tradition and rely on more modern influences.

Spiritual warriors and masters of conflict, who claim a heritage going back to the defenders of Atlantis. Currently, the Order of the Arrow could perhaps be described as something akin to a knightly sect, though bushido and other warrior codes find a place in The Arrow. These mages conduct intensive physical and mental training, honing the minds and bodies of order members into deadly weapons which magical society may then wield against its enemies (such as vampires, werewolves, Seers, and so on).


Guardians of the Veil

Spies and conspirators who claim their descent from the intelligence officers and enforcers of Atlantis' laws. Currently, they bear a resemblance to a combination of many occult conspiracies, such as the Thule and others. Many obscure their activities and identities even from other mages, and act as a check on humanity's dangerous curiosity for "that which man was not meant to know". To this end they falsify and obfuscate information through an elaborate honeycomb of lies and mis-directions known as "the Labyrinth".

Dedicated to pursuit of magical lore and the acquisition, cataloging, and study of mystical and occult knowledge and artifacts. They continue the ancient heritage of the scholarly and intellectual of Atlantean society. Their internal structure often resembles the academic structures of the part of the world in which they reside. The Mysterium gathers, catalogs and maintains items of all types of magical and historical significance. These are stored in museum-libraries known as "Athenaea", which vary in size from private collections to massive storehouses that must be physically hidden by magical means.

Dedicated to ruling and reshaping the world, the viziers and senators of Atlantis remain in force. Politicians and authoritarians, the Silver Ladder believes in creating a perfect hierarchy (with themselves at the top, of course) which will seize control of reality, subjugating it to the will of mankind. Many would say (justifiably) that the Ladder is only interested in power, but this dream is not without its altruistic appeal. As a member of the Ladder might point out, control over reality could bring an end to human suffering in all its forms.

Modernists who wish to create new forms of magic, a union of mages who have discovered ways of using magic that do not adhere to the Atlantean methods. According to Council members, mankind is subconsciously aware of metaphysical truths, and thus all of human society carries the potential for mystical wisdom. The 'Libertines' as they are also called, possess a strong belief in democratic process and anti-authoritarianism.


Belonging to any of the prior sects is completely optional for a character, though belonging to one can provide a safe haven and access to otherwise inaccessible information, both very valuable commodities in a world of darkness.


In case you're unfamiliar, here's what's required of you for character creation.


For purposes of creating a sheet, you should at very least need access to the (New) World of Darkness sourcebook for the basic stats.

It offers details on the available Skills, Merits, Flaws, Attributes, Virtues/Vices, etc. for a typical character of any sort, as well as fundamentals on gameplay mechanics.


Then you would need the Mage sourcebook for the appropriate Mage characteristics: Path, Order, Rotes, Arcana(for varieties of available magics), etc.


If you don't have either, read on.

A character's True Name being widely known is very very bad as it makes them more susceptible to sympathetic forms of magic.


Attributes:
(Hopefully you're reading along with a character sheet by this point for reference.)
5, 4, and 3 points, distributed between Mental, Social, and Physical stats respectively.

Acanthus, Moros, and Thyrsus Mages get a +1 to Composure, Mastigos & Obrimos get a+1 Resolve.

Skills
11, 7, and 4 points, distributed between Mental, Social, and Physical, along with 3 specialties. Specializations give a dice bonus if used during the appropriate situation.


Arcana
A Mage gets 2 dots in one Arcana, 2 in another, and 1 in a third, and a fourth dot to be used however the player likes.
Two dots must go to a Ruling Arcana(i.e. Fate & Time for Acanthus). A Mage can only reach five dots in their ruling arcana, and no higher than two in their inferior.


Rotes
6 dots. These are the spells accessible to a Mage. While having a dot in an Arcana means a Mage can improvise these spells, having a Rote means a larger dice pool, meaning it's more likely to succeed.


Merits: 7 dots
Found in the WoD sourcebook. There are also many Mage specific ones in the core sourcebook and just about every expansion sourcebook.


Starting Wisdom: 7 dots
This is a Mage's path of staying true to magic. Using magic for improper uses(i.e. murder, blatant disregard for the Veil, soul-theft) means a Mage loses wisdom, and is more susceptible to potentially losing their mind and succumbing to the Abyss.


If anyone lacks the appropriate corebooks and needs more detailed information, feel free to PM me or ask in-thread.


I would prefer around four players. Most likely they should be at least familiar with Banishers and have a good reason for wanting to get in on the action, if not simply wanting to avoid a fate worse than death at their hands.

If you want to make a mortal character and go through their Awakening, that works too.

(I'll be using first edition as that's what I know, but if anyone has 2E and wants to adapt, we'll work it out.)