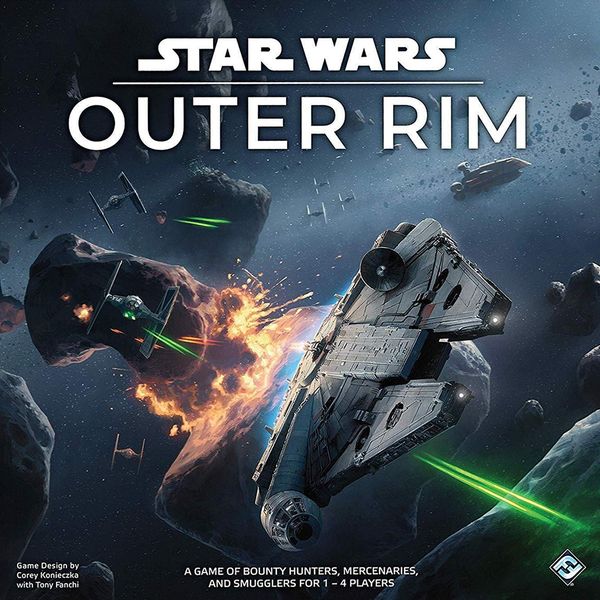 1-4 Players compete in a race to become the most famous rogue in the (original canon) Star Wars outer rim and stand above the other scum & villainy.

Moving- Move a number of spaces up to your ship's hyperdrive value. Must STOP on red (maelstrom) spaces, or spaces with patrols (npcs) belonging to a faction you do not have positive reputation with.

Patrol ships move after a player buys a market card, and the replacement card denotes movement. Move the listed faction patrol that many spaces toward the player.

Action step-
Perform any or all of the following actions, up to once each

Trade: trade cards with any player on your space (credits may be exchanged regardless of locations)
Market: if on planet, may buy card from market deck
Deliver: drop off bounty/cargo card on planet
Resolve action ability: resolve card that denotes "action" on it

You may then choose to buy one card. It can be the card on top of any market deck. After you buy a card, reveal the top card of that market deck and place it on top of the deck. Each market card has a credit cost in the top right corner (sometimes 0 credits). To buy a card, simply spend the amount of credits listed here (see “What Are Credits?” on the left). Then place the card under your ship sheet or player board in a slot that matches the card’s type. For example, if you buy a cargo card, tuck it partially under one of the “Cargo” slots on your ship. Each slot can hold one card. If you do not have an empty slot of that type, you may discard one of your cards to make room.

Cards in the ship market deck are usually new ships. When buying a ship, retrieve its ship sheet from the supply of unused ships. Your current ship sheet is returned to the supply, and the new ship is placed with its “Ship Goal” side faceup (shown on the left side of the sheet). Remove all damage from your ship, and keep all cards such as cargo, crew, and mods, placing them in the appropriate slots of your new ship.

When buying a card, you may discard any of your cargo, gear, or mods to reduce the cost by the discarded cards’ cost. Place the discarded cards on the bottom of their market deck.When buying a ship, you always barter your existing ship and use its cost (shown in the upper left corner of the ship sheet) as a discount toward the ship you are purchasing. You cannot gain credits back when bartering, you can only reduce the cost to a minimum of 0 credits.

Encounter step
Player must choose one of the following encounters

Encounter a Patrol: Fight a ship combat against a patrol token in your space. If you have negative reputation with a patrol in your space, you must choose to encounter it and you cannot perform other types of encounters.

Encounter Your Space: Draw an encounter card matching your space.•

Encounter a Contact: Reveal and encounter a contact token on your planet. This will let you resolve a specific databank card that often provides crew.

Resolve an Encounter Ability: Some card abilities are preceded by the bold word “Encounter.” Simply resolve the ability on the card.

Combat
You and your target both roll dice equal to your combat value (ship's if in space, character's if on planet). Player takes damage to hull (ship) or health (character) equal to number of hits (crits count as 2) the enemy rolled. Non-players have no health values. Win/loss is determined simply by which side rolled more hits. Attacker wins ties. (note: level 4 patrols automatically defeat players. The faction is now throwing around firepower that a simple rogue can't hope to match. No more local local bulk-cruisers, mind you. I'm talking about the big Corellian ships now).

A player is defeated when his health/hull hits zero. Flip your piece to its side and lose 3000 credits. Your next turn, you must use your planning step to recover damage.

Personal Goals
All characters and ships start with a personal goal. When completed, collect the reward and flip the card, giving you access to a new ability.

Reputation tracks
Each player has 4 tracks to show his reputation with the factions, with 3 positions each track:.

Certain effects will denote + or - to a reputation track, moving it up (+) or down (-) one space, i.e. + moves neutral to positive), or negative to neutral 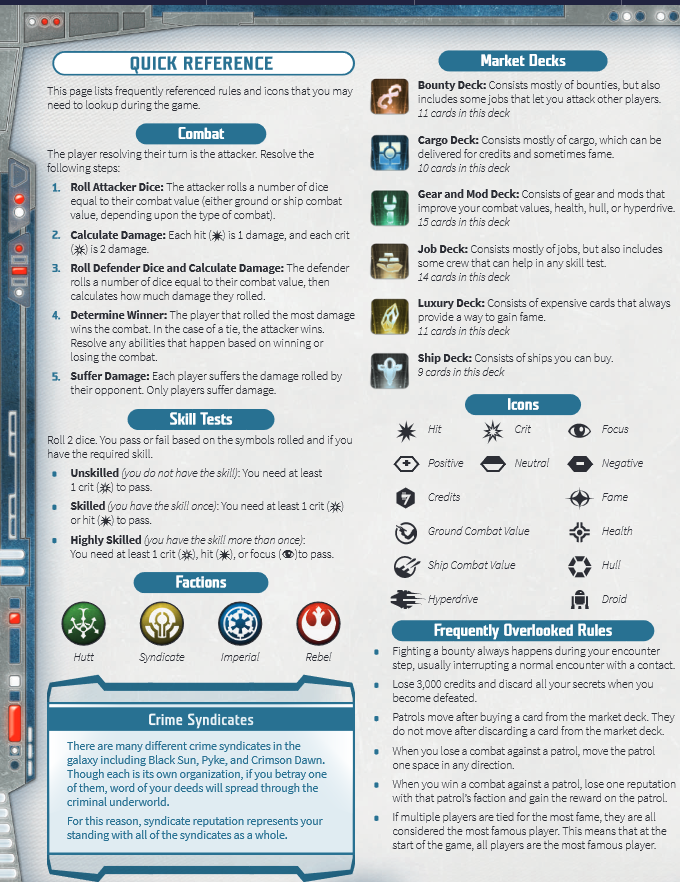