I am looking to gauge interest in an OPEN game of Microscope, with some tweaks to fit a larger audience than one would find at the table. Lower down this post you will find some basic information about what the game actually IS. I've tweaked things a bit, so even if you're familiar with the system, have a quick glance as some rules don't lend themselves to a big group.


As there's no set end point to the game, the game will end 1) When the history gets too big for me to store, 2) When it's clear to me that folks aren't as interested in the history anymore or 3) A group consensus to move on. At which point, group interest willing, we can set up a brand new game and start fresh from there.

Q: What do I, Joe Average Poster, do to contribute? (While a session is active).
A: All I ask is you post in this kind of vein (The structure isn't strict, but I do need all of the information):

I Introduce a new [Period/Event/Scene]

This [Period/Event/Scene] is Aligned [Light/Dark]


UPDATE: Each 'Focus' period will last for roughly a week, with the Lens closing the focus and moving on to a new lens around the weekend.

Game 1: THE RISE AND FALL OF AN EMPIRE 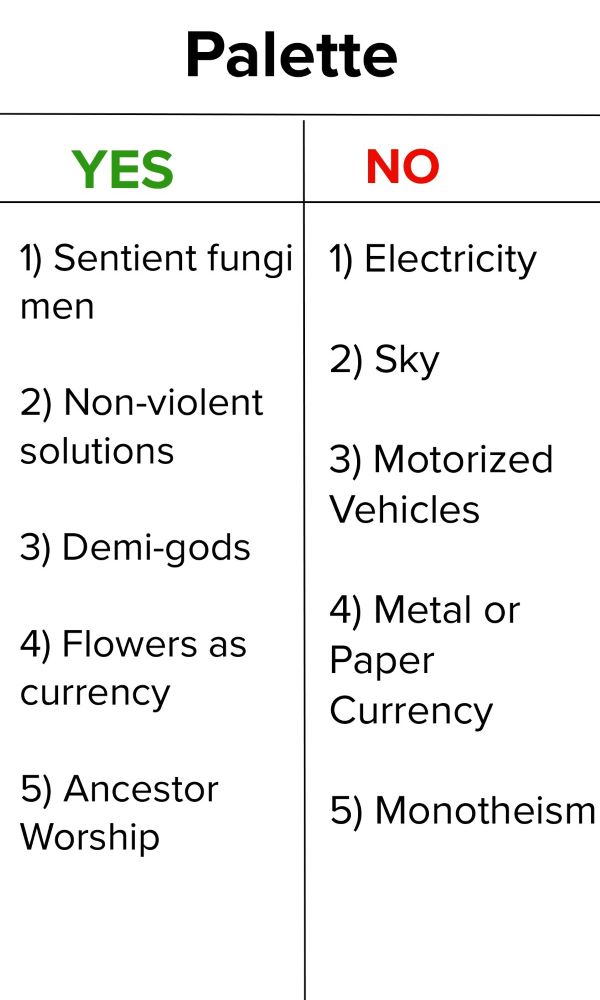 Microscope in a Nutshell...
Humanity spreads to the stars and forges a galactic civilization…

Fledgling nations arise from the ruins of the empire…

These are all examples of Microscope games. Want to explore an epic history of your own creation, hundreds or thousands of years long, all in an afternoon? That's Microscope.

You won't play the game in chronological order. You can defy the limits of time and space, jumping backward or forward to explore the parts of the history that interest you. Want to leap a thousand years into the future and see how an institution shaped society? Want to jump back to the childhood of the king you just saw assassinated and fnd out what made him such a hated ruler? That’s normal in Microscope.

You have vast power to create… and to destroy. Build beautiful, tranquil jewels of civilization and then consume them with nuclear fre. Zoom out to watch the majestic tide of history wash across empires, then zoom in and explore the lives of the people who endured it.
Microscope works differently than some other role-playing games you might have played, so let’s abandon some preconceptions:

You won’t have your own character.

You won’t play the game in chronological order. You may know all about the future, but be surprised by the past.

You’ll build the story from the outside in. You’ll decide the big picture, the grand scheme of history, and then burrow down and carve out the details.

So think big: you have a massive chunk of history to play around in.

Flow of the Game:
1) Big Picture
Before anything else, the Big Picture is established, by which the very overarching theme of the game is introduced. This will be a single sentence or phrase that will act as the overarching descriptor of the entire history we set out to create. This is all fiction and imagination, this can be ANYTHING, just make it BIG.

An ancient empire rises and falls.

Cavemen at the dawn of time found the first civilization.

2) Bookend History (with Periods)
The history we create will first be divided into Periods. These are the largest individual chunks of time in the game - all other Events and Scenes will fall within them, so they must be sufficiently wide. We will therefore create two Periods to 'Bookend' the history with, a chronological beginning and end to the History we wish to create. This is not to say that this would be the beginning and end of the universe - just the beginning and end of what we wish to explore. It is reasonable to assume the universe existed before the beginning and after the end of the History. One of these will be Aligned Light, the other Aligned Dark, it matters not which way around (except for the tone, naturally. Knowing the future brings Hope or Doom can do a lot of narrative lifting).

3) Palette
The Palette serves to get everyone on the same page about what is going to happen in the game, what will happen in the History and what will not. This will be divided into a simple 'Yes' column and 'No' column. For the purposes of this game I will keep the palette to a maximum of Five (5) items per column. If suggestions exceed this I will determine what goes up by Vote or by Diceroll, whichever seems most appropriate at the time. Also note: This is not an exhaustive or confining list of what can be introduced as we go, simply a list of exceptions before we start.

'Yes' - This column is for things you think the other players would not expect to be in the setting, but you want to ensure is included. During the rest of the game it’s okay to introduce it into the history even if it doesn’t seem like it fits. By playing the game you’ve all agreed it belongs. E.g., Magitech in an otherwise Fantasy setting.

'No' - This column is for things you think the other players would expect to be in the setting, but you don't want it to. If something is in the No column, it’s never okay to bring into the game, no matter what. You’ve all agreed it’s not part of the history. E.g., No Dragons in a Fantasy setting.

4) Lens Action
To run this game in a forum format, the usual rules will not apply here. Instead I will ask that anyone interested in being the Lens of a Session of Play to make themselves known. I will make a list of interested folks, then go down the list on a First Come, First Served basis. The Lens player opens up a session with a Focus, the part of the History that all the players will contribute to this session. They will also look to the previous Focus and pick one Legacy Once the session has been PAUSED, the Lens will add a final Period, or TWO nested things (two events, two scenes, or one event/one scene) to close out the focus they introduced.

5) The Session
Once the Lens has done their bit, the floor is open for everyone to submit a Period, Event or Scene into the timeline for the next 48-ish hours, based upon the focus the current Lens has set.

6) PAUSE
After 48 hours or so I will call for a PAUSE, during which the Lens will finish up their role, a new lens will be selected, and I can organise everyones contributions into what I hope will be a faily neat timeline. When I'm done, we'll start again from 4).

Particulars/Elements:
Period:
The period is the 'Top Line' of the History, covering the widest period of time. The time itself can vary wildly from one Period to the next, so long as within this period multiple Events and Scenes can be nested.

When creating a Period, make a short statement about what it is E.g. 'The Reign of Godwin II', 'The War of the Three Lions' etc. It's good to keep this concise yet open ended to let others really explore it, but perhaps include a bit more detail in your post if it isn't immediately obvious.

Remember to align this as 'Light' or 'Dark', perhaps with a justification if it isn't immediately obvious as to why. You must also state which existing Periods this new one falls between.

Event:
An Event is one factor down from a Period, and details something more specific in both time and scope within the Period it is embedded. This is a shorter time span than a Period, but still longer than a Scene.

When posting an Event, remember to Align it as 'Light' or 'Dark', and be sure to state when it takes place [After Event X, but before Event Y] during the period.

Scene:
A Scene is the most specific post you can make, embedded into an existing Event. It is the smallest in both time and scope.

A Scene is slightly more involved, and consists of three parts; 1) A Question, 2) A Summary, 3) An Answer.

The Question should be short, and introduce why you're introducing the Scene in the first place. What is it about the Event that you want to see in more detail?

The Summary should be just that - a summary of what went down in the scene, to help you arrive at an answer to your question.

The Answer should then take the most relevant part of your Summary to answer the question succinctly.

For example, a Scene under the event 'Disgruntled Nobles Attempt to Assassinate the King' might read as:

1) Who is the ringleader of the Assassins?
2) Duke Tristan of the Western Isle helped to organise and bankroll the assassins after King Godwin abducted his daughter to force her to be his consort.
3) Duke Tristan

Your summary can be as detailed as you want but I will inevitably need to shorten it to fit on a card. You also need to mention if this Scene is Aligned Light or Dark.

Legacy:
When the Lens for the session closes their Focus following a PAUSE, they also select a new Legacy. A new Legacy can be anything that came up during the current Focus, whether it was introduced for the first time or is a re-ocurring thing from a previous Focus. These should be something that the Lens particularly liked and feels should be something to come up again in the future (or past, hee hee). An existing Legacy can even be used by another Lens as a Focus if they so wish. 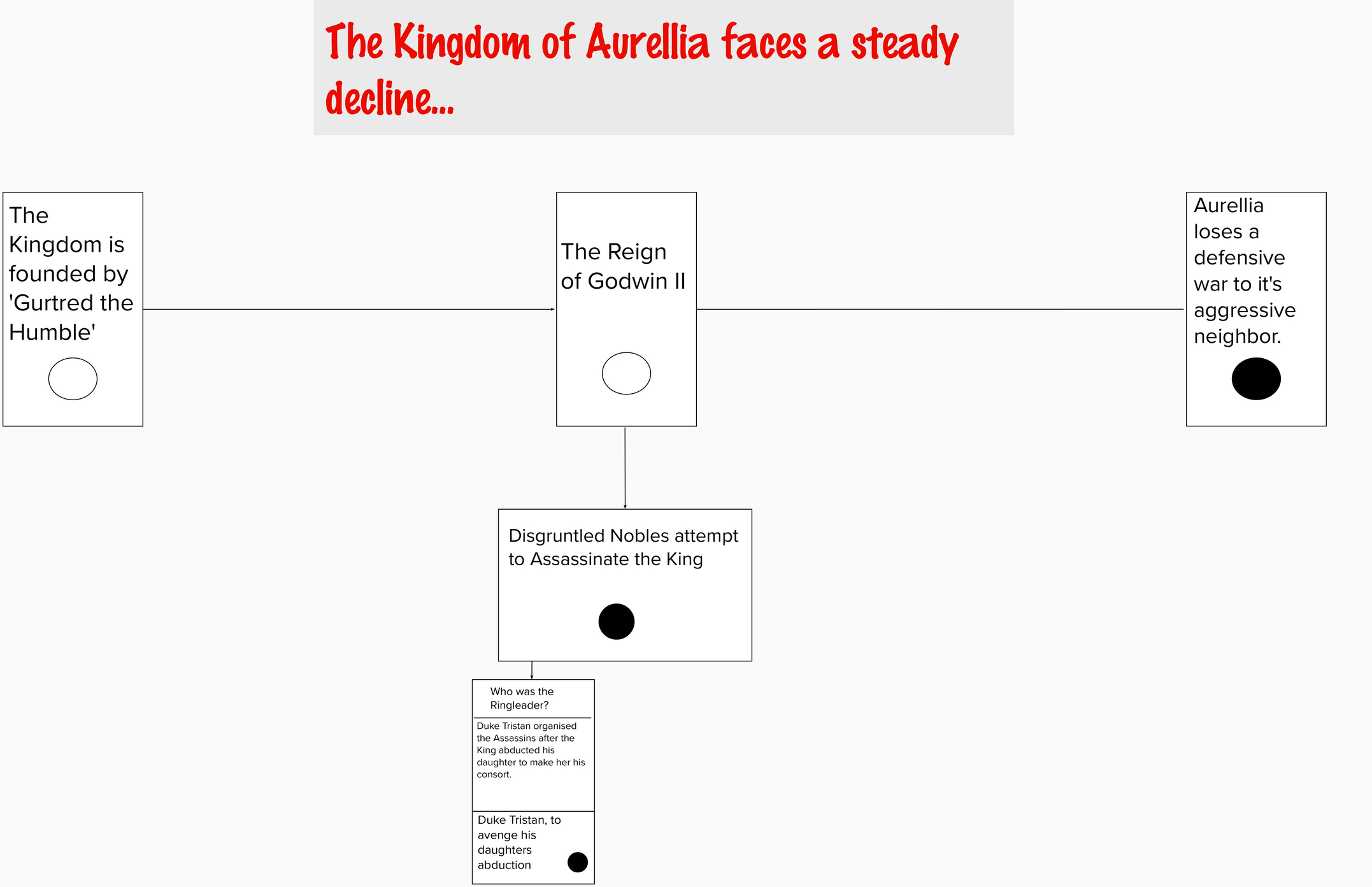