February 2008 edited March 2009 in Games and Technology
So, judging from the trailer, it looks like a God of War kind of action game, except you play a Scoripion and take on bigger animals that want to eat you? AWESOME.

Some Screenshots not badly compressed at IGN: 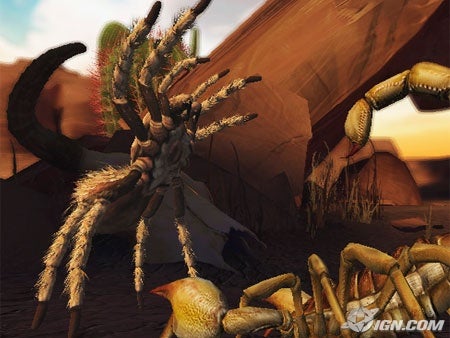 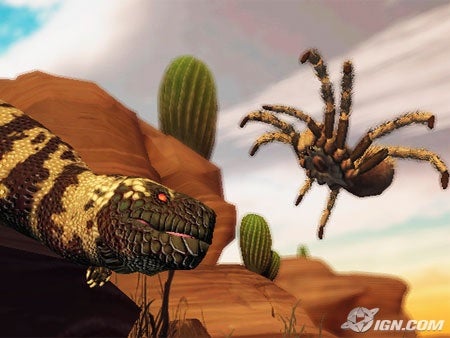 February 14, 2008 - Publisher THQ on Thursday announced Deadly Creatures, an original game developed exclusively for Wii by proven software house Rainbow Studios. The game thrusts players into the roles of both an armored scorpion and a stealthy tarantula as they battle through a desert wasteland in a fight for survival. The unlikely duo will face off against Gila monsters, lizards, tarantula wasps, black widows and, worst of all, man.

"Deadly Creatures is an amazingly innovative game concept, and exemplifies THQ's commitment to creating original new IP for the Nintendo Wii platform," said Randy Shoemaker, director of global brand management, THQ. "With Deadly Creatures, we are raising the bar for all third-party Wii titles, and focusing on deep, compelling gameplay for a largely untapped audience of Wii gamers."

"Deadly Creatures is a creepy, cinematic thrill ride, where the distinction between predator and prey can shift around every corner," said Nick Wlodyka, executive producer and general manager, Rainbow Studios. "With brutal motion-controlled combat, a dark compelling story and some of the best visuals to date on the Wii, we are excited to bring Deadly Creatures to a large core Wii audience that hungers for a new experience."

At first glance, Deadly Creatures would appear to be a 3D fighter, but according to the title's lead designer, Jordan Itkowitz, who spoke to us for clarification, there's much more to the game than initially meets the eye. "The game offers a mix of combat and platforming-based exploration using the main characters' unique attacks and abilities," he said.

Rainbow Studios is making full use of the Wii remote with the project. Explains Itkowitz: "One of the main reasons we wanted to do Deadly Creatures for the Wii was the un-missable opportunity to let players emulate these characters by acting out their attacks and abilities with the Wii controls. Every input option is being used -- it's a fluid mix of gestures, IR-pointer functions, and some more conventional controls."

How big is the scope of these battles? Pretty big. "If you get down to these creatures' perspectives, their lives -- and the lives of their prey, rivals and enemies -- are short and brutal," said Itkowitz. "We've all flipped to a nature channel and been fascinated by clips of insects locked in combat, but we wanted to elevate those clashes to the level of a monster movie. Think about the immense battles in King Kong or Jurassic Park - the scale may be smaller here, but the impact is the same."

Deadly Creatures will not feature an online mode, as Rainbow Studios wanted to focus on the local single-player adventure. But there is more to be revealed as the game draws closer to release. "There are plenty of unique elements to this game that we're excited to share in the coming months: a dark, sinister storyline, a fascinating sense of scale and discovery, vertigo-inducing camerawork, and more," said Itkowitz.

Here's an official excerpt from THQ's description of the game: "A world of danger and discovery: Infiltrate the gloomy, thorn-filled labyrinth of the Brambles, home to gangs of wolf spiders and vicious black widows. Battle scavenging rats in the trash-filled Wasteland, where an old abandoned truck towers above you like a fortress. Scale cliff walls, cacti and rusting subterranean pipes, all to reach your final, most dangerous destination: a creepy old gas station on a lonely desert road."