Haze is a first-person shooter developed by Free Radical (see: TimeSplitters) and published by Ubisoft.

Wikipedia wrote:
In the game, Mantel soldiers make use of Nectar, a performance-enhancing pharmaceutical drug that grants the user enhanced speed, accuracy and strength. Mantel uses this drug to control the minds of its soldiers. When administered, "Nectar" can control--among other things-- what a soldier sees, similar to the effects of a hallucinogenic drug. It makes enemies stand out against the darker grey background because "Nectar" causes soldiers to see the enemy combatants turn to a orange color, "Nectar" also drowns out the surrounding images of death and destruction. An overdose of Nectar is dangerous, with loss of mental control and death being its possible side-effects.

As revealed in a EÂ³ 2007 trailer, Rebel soldiers may go in to a Play Dead state just before they are killed, allowing them to regenerate health and 'disappear' from the Mantel soldiers' sight, since they can't see dead people while on Nectar. In addition, they have been given the capability to exploit Mantel's dependence on nectar by attacking the nectar injector, extracting nectar to use on throwing knives from dead Mantel troopers and using the injector to create nectar grenades. They can also steal a Mantel trooper's gun, and bury grenades in the ground as mines.


This game should be goddamn awesome. Why? 4-player online and offline co-op.

Wikipedia wrote:
Haze is planned to feature a four-player split screen co-op mode as well as a four-player online co-op mode. At Ubidays, it was revealed that all four squad members were player enabled and could be played co-operatively by joining the game. Multiplayer can be played with one to three extra players through combinations of online, split-screen, or LAN.[4] Multiplayer games will also include narrative-based missions to complete, and the game will accommodate up to 16-player[5] online battles. In addition, the online multiplayer is split among two groups called Mantel and Rebels. Each side has its advantages. Nectar abilities allow Mantel troopers to easily distinguish friend from foe. The Rebels wield throwing knives coated in nectar that cause the Mantel troopers to overdose. In this overdose, Mantels cannot distinguish friend from foe, and may team kill. But, the Mantel side has increased nectar abilities which allow them strong melee attacks. To counter this, the Rebels can play dead. Each side also has their own special gun as well. Mantel has the rocket launcher whereas the Rebels have the Gatling gun and Flamethrower. Despite this, both sides can pick up guns from either side.


Here are some screenshots shamelessly stolen from IGN: (spoilered for huge) 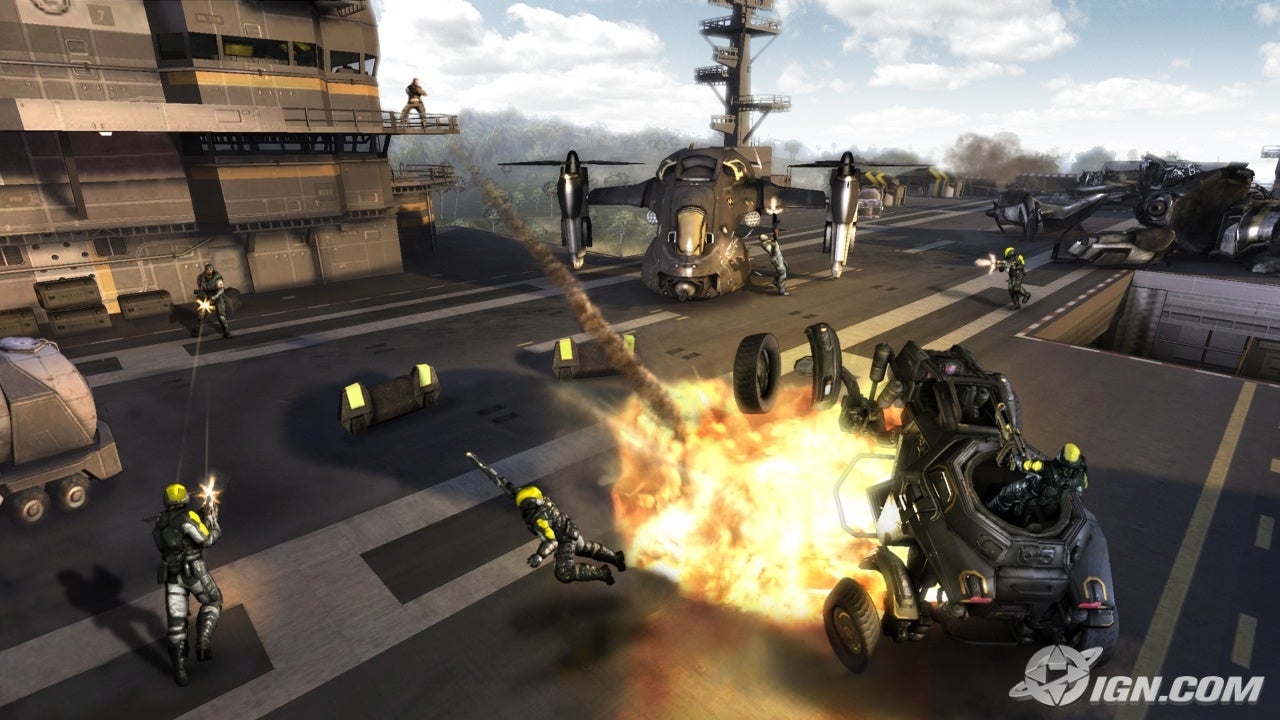 As you can see, it is a pretty game. The blurring effect in the first shot is from Nectar, the drug that Mantel Corp uses on its troops. You can also see from these shots that there will be vehicles, and that the primary locale is a jungle.

There is a demo in the PSN store right now. It is 1.5gb. It has multiplayer enabled. Go get it.