Registered User
April 2010 edited May 2010 in MMO Extravaganza
So most people on this forum know about Star Wars Galaxies. It's had a pretty tumultuous history, what with the original developer team dicking it over multiple times. While personally I feel the game's improved massively since the backlash to the NGE lead to a shift in developer focus (Along with a few developers being quietly removed from the team.), to the point where it outdoes the pre-CU era, others are still a bit pissed over the NGE and refuse to play it.


Since I didn't see a topic about SWG, I figured i'd post here to mention that the latest content update to SWG finally added in a proper galactic civil war, giving the endgame a purpose aside from dicking around and raiding dungeons. Entire planets, regions on planets, and areas of space can now be conquered by the two factions, and each class, including non-combat classes, now has an actual purpose in PVP, with it looking like entertainers and are going back more of their pre-CU "social" roles. Traders have their own stuff to do now as well other then craft and hope someone buys items from their shop.

In addition to that, it looks like the game has received some fairly massive improvements both in the GUI area mapwise to accommodate the new changes, and back-end network improvements to support the warfare aspect of the game.

Rather then make a long-winded essay about it, i'll let the wiki and update info do the work for me. I've bolded the actual feature list for the sake of simplicity.

Imperial counterintelligence agents embedded with a Rebel Bothan spy network intercepted the following Alliance transmission. Our field agents have noticed heightened Rebel activity in certain sectors, and it appears as though we have uncovered the cause:

Following the recent situation on Dathomir, and additional rumors of Imperial atrocities, it is imperative that we take extreme measures to expand our intelligence gathering networks and secure vital communications routes. I am calling on all fleet commanders to rally ships and available ground forces to three critical strategic points across the galaxy:

Tatooine – city of Bestine: The capital of Tatooine is rife with corruption and political turmoil, and is also a key Imperial outpost. If we take and hold this city we will control a wealth of information that moves through the galactic underworld.

Talus – city of Dearic: Another capital city plagued by dirty politics and scandal, Dearic is also home to a diverse and bustling Starport. Control of this city provides a broad spectrum of intelligence that will span the entire galaxy.

Naboo – city of Keren: As the Emperor's home world, Naboo is the beating heart of the Empire. To establish a control point on this planet would not only supply access to crucial intelligence, but would also be a devastating blow to Imperial morale and the Emperor himself. With its high level of commerce and financial influence throughout the Naboo system, Keren is the perfect target for this operation.

This mission takes top priority. The Empire must not be allowed to hold these cities. Good luck, and May the Force Be With You!

Imperial Intelligence has confirmed the authenticity of this transmission. Squadrons will be assigned to deliver ground invasion forces to each of these locations to take and secure the cities. Under no circumstance can we allow these Rebel scum to gain a foothold. Be advised that Lord Vader himself has taken a personal interest in this matter, and failure will not be tolerated.

New, massive invasion/siege warfare scenarios in three major cities - Bestine, Dearic and Keren featuring: New Gameplay:
Dynamic changes occur in cities based on which faction is currently in control. Cities will display Imperial or Rebel banners and faction-specific NPCs, quests, terminals and pylons depending on which faction is on top
Added support for Factional Mercenaries. Neutral players can align themselves with either faction to participate in city conflicts and earn rewards
Mayors of player cities are able to set their city's factional alignment from the management terminal
Win battles within newly implemented Planetary Regions, which determine which faction controls a planet
New Planetary Region Display interface shows which faction is in command of regions and planets throughout the galaxy
New Interactive Structures:
Defend your city by manning barricades and building defensive turrets
Assault enemy cities and take out defense structures and key enemy personnel with the might of AT-AT or Hailfire missile attacks
All New Profession-Based Quests:
Contribute to the battle with profession-specific quests that let you bolster defending or invading forces
Improve and repair defensive structures, revive fallen soldiers, heal fatigue, entertain demoralized troops, slice terminals, scout and sabotage patrol points, and more
New Rewards:
Reap the benefits of war when you successfully lay waste to your opponents with invasion-specific quests
Earn tokens for defending your city with battle-specific quests such as manning barricades, building turrets and treating wounded soldiers
Cash in tokens for new rewards, which include: faction-specific clothing including capes, cloaks and battle-scarred armor; Entertainer glow sticks and multiple new weapons

The Galactic Civil War is being introduced with Update 15. With this update, your GCW points are directly responsible for control of cities, planets, and the galaxy. You will see these changes reflected on your planetary and galactic maps. Bestine on Tatooine, Dearic on Talus, and Keren on Naboo have been turned on for the new invasion system.

Invasions occur every three hours and last an hour. Two of the three cities will be active during each invasion.
The construction phase lasts 30 minutes.
The battle phase lasts 30 minutes.
Defeating a defensive general will end a battle with the offensive team as the victors.
Keeping the defensive general alive for the entire battle phase (30 minutes) will allow the defending team to win.
Defensive general will flag players as Special Forces, if they persist in attacking him. A warning window will be displayed for attacking a general and not being Special Forces.

The Planetary Map for the appropriate planet will show the current phase that Bestine, Dearic, or Keren is currently in (construction, combat or occupation).


Factional Helper
Neutral players can become factional helper to help their favorite faction.
Use the command browser, /factionalHelper slash command, a faction recruiter, an invading city General or a city defensive Field Commander NPC to access the factional helper system.
There is a 30 minutes cooldown once you have stopped helping one side before you can start helping the other side. You can still immediately help the side that you most recently stopped helping.
If you are a Special Forces factional helper, you will be automatically changed to Combatant factional helper upon cloning.
Factional Presence
If you are factional special forces (NOT factional helper special forces), "actively" playing the game, not cloaked/incapped/dead, and out in the world in a GCW contested region, each minute, for risking life and limb to provide factional presence/patrolling the GCW contested region, you will automatically provide a nominal amount of points to the GCW score for your faction for the contested area. The amount of points is proportionate to the character level, plus a 10% bonus for each GCW rank.
Factional presence is only granted if you (or if mounted, your vehicle/mount) are on the ground out in the world. This means that factional presence is not granted if you (or if mounted, your vehicle/mount) are in/on any part of a structure (like entrance steps, roof, balcony, theater stage, etc), or on a bridge, or in a garden, or in the bazaar/bank plaza, or on a storyteller platform, etc.
A "GCW Factional Presence" radial menu has been added to the War Terminal and the War Intel Pad that displays a window showing the GCW contested regions that currently have factional presence activity.
Player City Factional Alignment
The mayor can set the city's factional alignment from the city's management terminal.
There is a 1 day wait to switch the city's factional alignment. There is no wait to align with the same faction that the city most recently aligned with.
The city's factional alignment is displayed in the city's status window and in the announcement message when you enter the city's borders.
If factional presence (see above) occurs within the borders of a same aligned player city (i.e. the player city overlaps the GCW contested region, and the factional presence occurs in the overlap area), there is a 100% bonus, plus a 10% bonus per city rank, plus a 5% bonus per year of city age.
Travel Perks And Restrictions:
Once a planet is 70% controlled by a faction, the following travel perks and restrictions will apply to GCW officers. To repeat, GCW travel perks and restrictions only apply to GCW officers.
GCW officers of the controlling faction will have 0 shuttle wait time.
GCW officers of the losing faction can only board every other shuttle, or pay a 50000 credits surcharge (each time) to avoid waiting for every other shuttle.
GCW officers of the losing faction must pay a surcharge for shuttle travel if either the departure or the arrival planet is 70% controlled by the opposing faction, whichever is greater. The amount of surcharge is 500 credits for each % above 70%.
If the planet has more than 1 Starport, only 1 Starport will be available for interplanetary ticket travel (both outgoing and incoming) to GCW officers of the losing faction. The 1 Starport that is available is the one that is least controlled by the controlling faction.

User Interface
The Galactic Civil War Information Screen:
A new button has been added to the button bar. The Galactic Civil War screen is THE location to get all the information you need to see what's going on in your part of the world, or how the war is going in other galaxies and the final score across all galaxies.
This screen can also be brought up with the /gcwInfo command.
The Galactic Travel Map:
The planet map has been updated to show areas that affect the outcome of the Galactic Civil War as well as the score for that current zone.
Areas currently under rebel control will show up as a rebel insignia, imperial control shows up as an imperial insignia, and 50/50 zones are shown with a contested insignia.
You can prevent the Galactic Civil War zones from showing up on your planet map by simply unchecking the "Show GCW Contested Zones" option on the Planet Map window.

Miscellaneous
Spawns will now be affected by a regions GCW score. The higher the score is in a region, the more likely you will be to see troops from the faction that is currently winning.
There are new collections tied to the GCW city invasions.
GCW points directly affect some planetary spawns and are properly represented on the war terminal.
Mon Calamari Cruisers or Star Destroyers will appear in the sky of a planet, depending on who is winning. The more your side is winning by, the more ships you'll see.

There's a metric crapton more in the way of notes and new content, such as including actual functioning AT-AT's ingame now, and the rebels having their own counter to the AT-AT (AT-XT) for invading cities, but I took the most relevant notes in the interests of expediency and linked them here. See below for the rest.

Also, a recent content update added in zombies, a zombie plague, a new dungeon, a new quarantined area, and a crapload of other stuff, as a tie-in to a recent Star Wars book, Death Troopers. Contrary to what you might think, the content update is actually pretty damned awesome.

There's also an even more recent update that pertains to piracy and apparently lets smugglers earn "contraband", but noone except for smugglers cares about that. And we all know that Lucas hates smugglers anyways. 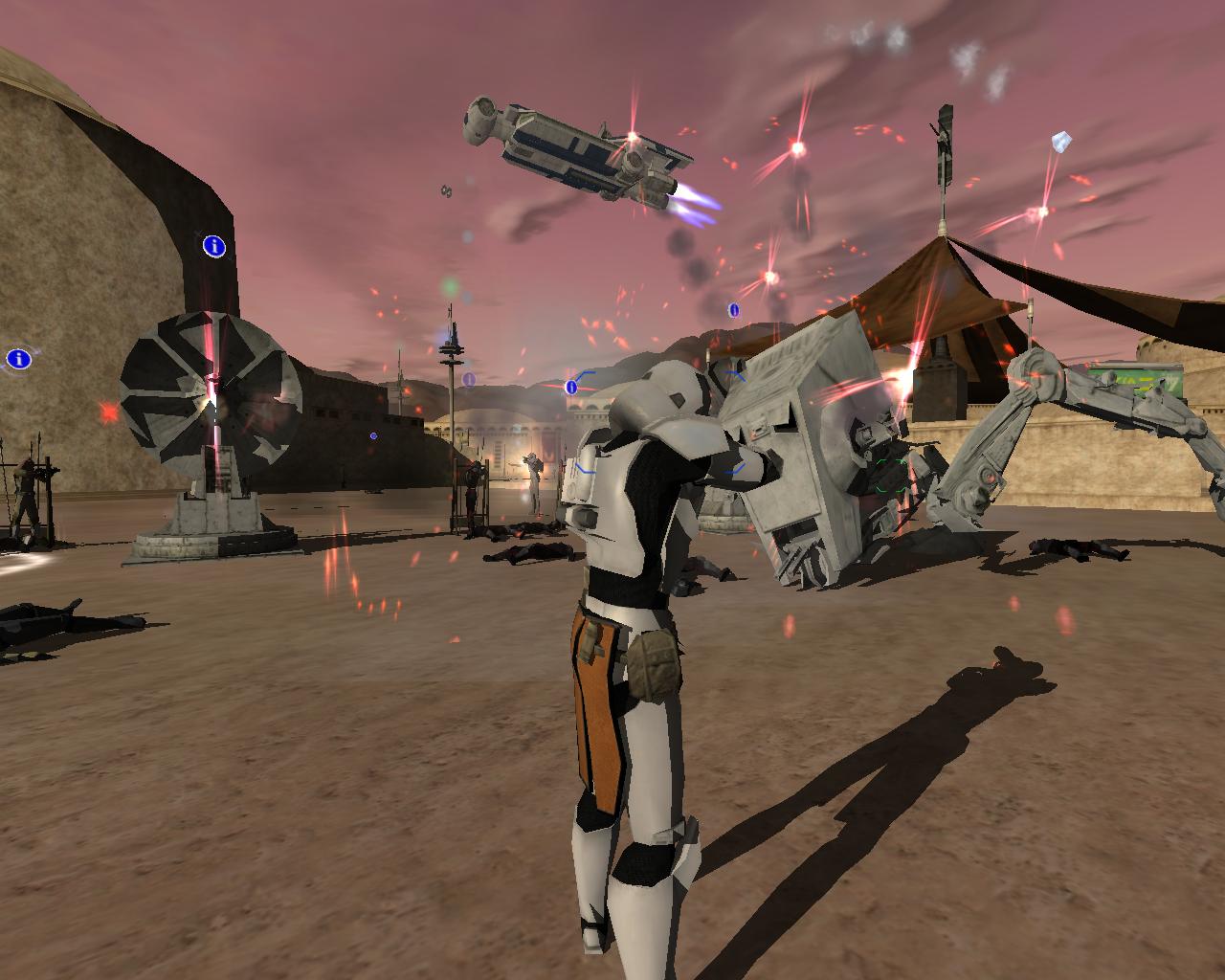 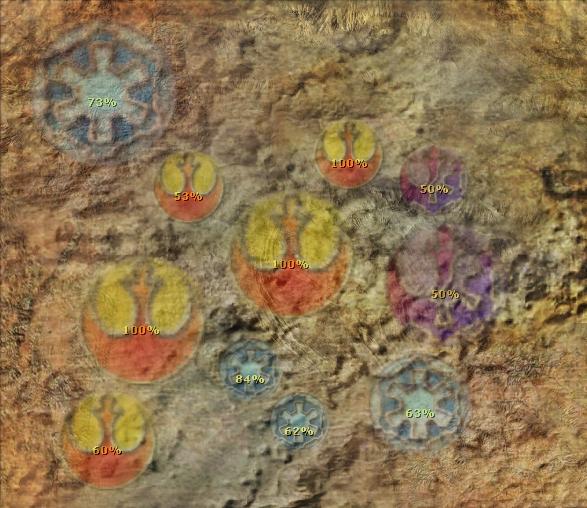 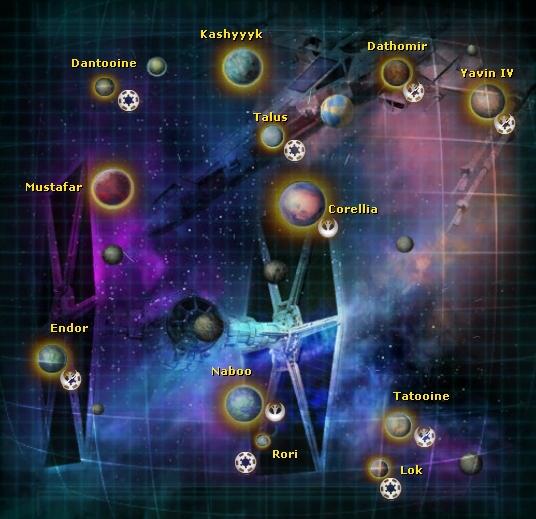 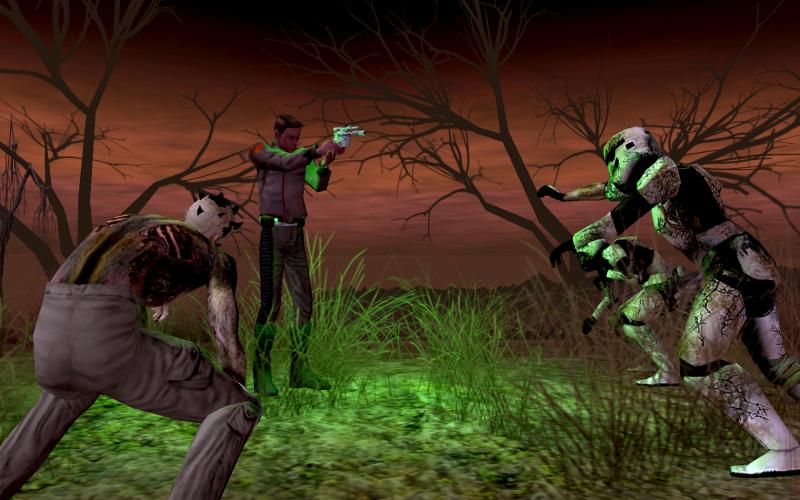 The wiki entry for the new PVP system:
http://swg.wikia.com/wiki/Galactic_Civil_War_Update
Archonex on May 2010
0
«12»