And there came a day, a day unlike any other, when Earth's mightiest heroes and heroines found themselves united against a common threat. On that day, the Avengers were born—to fight the foes no single super hero could withstand!


So yeah, The Avengers. Maybe you have heard of them. Once an important, yet not as successful as its' peers, part of Marvel's line, it has since evolved into the publisher's flagship franchise capable of sustaining 5 books at a time.

The main team led by Steve Rogers, the Avengers are designed to tackle the most immediate and dangerous threats against the Earth. The current roster includes: Captain America, Iron Man, Hawkeye, Maria Hill, Protector, Quake, Red Hulk, Spider-Woman, Storm and The Vision. Currently tied up in a crossover with New Avengers called HAMMER War, Avengers will be one of the major tie-ins to Avengers vs. X-Men as well as Bendis' long-brewing Ultron War plans.

Hand-picked by Luke Cage, the New Avengers are more of a family or brotherhood than a team. They take on whatever threats they deem necessary, particularly dismantling what is left of Norman Osborn's HAMMER. Current roster includes: Luke Cage, Spider-Man, Wolverine, Jessica Jones, Iron Fist, Dr. Strange, Daredevil, Victoria Hand, Ms. Marvel, Mockingbird and The Thing. Just like Avengers, it is currently half of the HAMMER War crossover. During AvX it seems to become THE ADVENTURES OF IRON FIST. This is awesome.

A team designed to complete one simple mission statement: Run the Mission. Don't Get Seen. Save the World. The Secret Avengers are a black ops team tasked with eliminating the more extraordinary and unknown threats of the world, ideally before they rise to public attention. A new direction took place in this month's issue 22, placing Hawkeye as team leader and a group of evolved synthezoids known as the Descendants as the new team's first foe. The team is: Hawkeye, Black Widow, Valkyrie, Captain Britain, Beast, Venom, Ant-Man, Giant Man and the Golden Age Human Torch.

A group of superpowered teenagers that were experimented on by Norman Osborn, the Avengers Academy started as a program to prevent these teens from becoming the next generation of super villains. Since then it has expanded greatly, moving to the former West Coast Avengers headquarters and opening its doors to any teen hero seeking guidance. Faculty includes: Giant Man, Tigra, Quicksilver and Hawkeye. The primary student cast are Striker, Mettle, Reptil, Finesse, Hazmat, Veil, White Tiger, Julie Power and X-23 although many other heroes make cameos and supporting appearances. 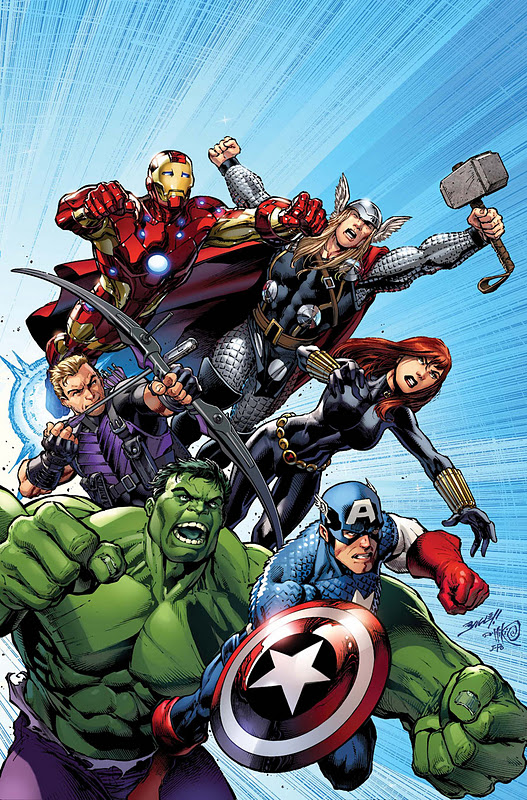 Intended to be a "greatest hits" title, Avengers Assemble features an iconic roster of Avengers(that just HAPPEN to be the same as the movie) tackling new versions of classic Avengers threats. Not immediately tying into any other storylines, the series looks to be a stand alone book in the vein of classic Avengers stories. Launches in March.

NOT OFFICIALLY AVENGERS SERIES BUT KIND OF CLOSE SO WHATEVER:

The big summer event this year, AvX has the Avengers and the X-Men butting heads over the Phoenix Force's imminent arrival on Earth. Cyclops thinks the X-Men should use Hope in an attempt to control the Phoenix Force and Captain America thinks that is a really dumb idea. The 5 man writing team seems to be switching off every issue, while following the main plot that was hashed out by Aaron and Bendis. Also Iron Fist may or may not become the Phoenix. Just sayin.

Brought together by the Hulk, the Defenders are a team of mismatched heroes that have to save the world from threats to outright weird or insane for anyone else to tackle. The book just wrapped up its' first arc, and is starting a series of character focused issues(one each for Doctor Strange, Namor and Iron Fist specifically) before moving on to its' next main plot. The team is Dr. Strange, Namor, Iron Fist, Red She-Hulk, Silver Surfer along with future members Nick Fury and Ant-Man.

ALSO THERE IS A MOVIE COMING OUT OR SOMETHING