Registered User regular
February 2012 edited May 2012 in Games and Technology
The long awaited spiritual successor to Warhawk comes out on May 8th with a full single player campaign and a revamped multiplayer portion. Starhawk is being developed by Santa Monica and Light Box Interactive.

Single player:
The setting for Starhawk is a series of planets with a brand new resource on them known as Rift Energy. There is a current oil rush going on to set up claims and make a fortune off the green blue stuff. Unfortunately long time exposure to it changes a rifter into an outcast which for some reason seem hell bent on stopping the harvesting of it at all cost.

The main charactor Emmet Graves is one such rifter who's claim gets assaulted by the outcast. His rig explodes bathing him in unshielded rift energy causing him to change into an outcast. His doctor buddy gives him a kind of life support device that slows the transformation making him something in between the two.

Multiplayer:
Here is a half way decent primer for new players trying to wrap their heads around what is going on. 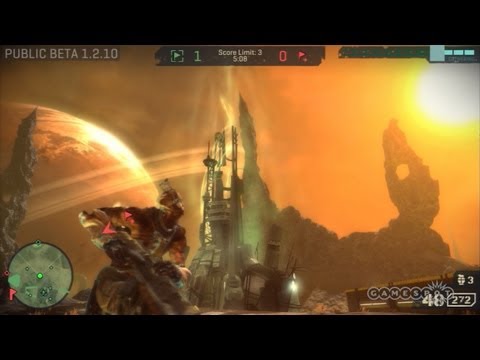 The game is a hybrid rts third person shooter. Using your Rift energy supply you can drop ready made structures onto the battle field anywhere you want. There are a vehicles to open the map up for high speed traversal and combat.

Vehicles and weapons:
Razorback: This is a fast 3 seated jeep similar to the one from Warhawk and Halo. It's the only vehicle currently in the beta that looses no functionality when you have the enemy flag. Press and hold x to hot swap from one seat to another.

Vulture jetpack: These are not too terribly fast but they allow you to reach higher spots on the map for snipers and rocket assaults. They also make you harder to knife or stomp. Note that while flying you can be locked on by the missile launcher, hawk weapons and beam turrets.

Hawk: The VTOL/hover function from Warhawk is gone replaced by mech mode. In mech mode you still have access to all of your weapons you a bit slower but you can still overtake a running enemy if your persistent enough, and you can stomp with R3 for an easy kill. Beware though you become very vulnerable on the ground not only are you a much larger target but a sniper can actually shoot you off the top of your ride with a good enough shot.
There are several settings for flight mode mess around with them till you find what works best for you most players from Warhawk will be using the advanced option with hold fire lock on. All the classics are back hold r2 l2 for drift l2 brake r2 go fast.

Jetbike: Agile one seat and no armor to speak of. No built in weapons but you can stop aim and fire infantry weapons with out having to dismount. Careful when turning on inclines you can roll the bike causing you to be exposed to enemy fire while trying to flip it back upright and get on.

Tank: Mobile armored and dangerous. This monster has two fire modes line of sight and mortar fire. There is a seat for a second man to fire infantry weapons from, hand for a buddy to be there armed with a rocket launcher to protect from hawks and a welding torch to patch up damage. Beware hawks though the gun will track directly to you making a few solid strafes deadly. Shotgun: Aim for a tighter spread great at close range.

Rocket launcher: Locks onto hawks and vultures in flight, direct hit is an instant kill on infantry, great for turning an enemy base into a pile of rubble when fired from a bunker.

Rail gun: Head shot is an instant kill capable to hitting multiple enemies if they happen to be lined up. Press r3 for extra zoom.

Proximity mines: These spawn on the map throw them on any surface when an enemy walks or drives near it they will have a bad day.

Welding torch: There is a spawn near your base always. These will let you repair any friendly vehicle or structure and do damage to any enemy one.

Swarm laser: Able to lock up to eight times on a flying hawk or vulture. Lots of ammo capacity.

Homing missile: These are hard to shake do a lot of damage but take a long time to acquire a solid lock on. Currently best strafing weapon in the beta too.

Air Mines: When you fire this weapon you will leave a chain of floating weapons that will latch on to any enemy plane that fly's too close and deal some damage. Not as bad as they were in warhawk, still not a fan.

Flak gun: Deadly in a dogfight just line up get close and watch your victim fall from the sky. No aim assist only dumb fire so great for an ambush, but limited usefulness in more turn and burn dogfights.

Torpedo: Long wind up big damage. These are very slow moving projectiles and can be shot down by the enemy. When they hit they hit hard though shorting out shields and leveling any structure taking a direct hit. 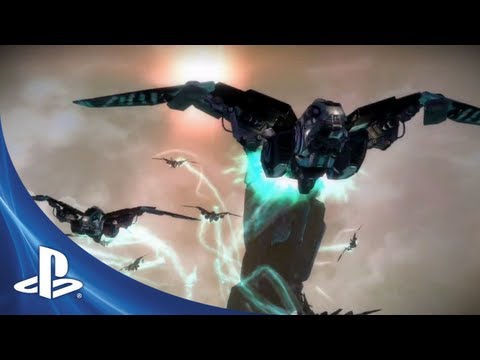