Registered User admin
April 2013 in Indie Games
You shiver as you swim, though the water is not cold. Up ahead, Goldblum laughs at you. You sense his derision; feel it in your dermal denticles. He's too fast - you cannot hope to catch him. But maybe, just maybe, you can steal his shoes. This is BioShark Infinite. 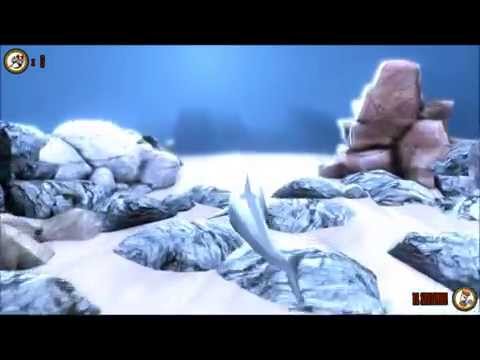 So a week or so ago a game came into my brain as I drifted off to sleep. I reached for my phone, half-asleep, and hastily threw it in an email to my good friend James Benson. The email went like this:

Endless Swimmer game where you are a shark chasing a taunting Jeff Goldblum along the ocean floor. Like that one shark Bruce in Finding Nemo. Randomly generated or at least randomly decorated level. Jeff isn't modeled because that's hard, he's probably just a sprite with ****ty body. Get points by eating fish along the way. Very limited control, up/down/left/right while ceaselessly pushed along open-ceilinged tunnel/ocean floor. Dodge obstructions. Can boost, get boost by eating stuff. Gold coins rare, give mad points and a Jeff goldblum pun. Nigh-constant obnoxious video game congratulation text in impact font on screen all the time. LEVEL 14 UNLOCKED X20 MULTIPLIER. ATE A SNAIL SNAIL BONUS. You can't catch goldblum but if you get close enough you can steal his shoes and a voice says "dude we could totally steal Jeff goldblum's shoes". Shark is maybe a robot with sweet robot eyes. When you fail because you hit too many obstacles the fail screen is Jeff goldblum's face saying something mean from one of his movies. Beat your high score. Boom.goty of the year.

Fast forward to last night: the guy who did the UI stuff on InFlux comes by and we unexpectedly end up game jamming and making BioShark Infinite as an impromptu celebration of being more or less done with InFlux. SO HERE IT IS. Some features got cut/changed from that pitch, there's no fish for instance, but we're pretty happy with our ~10 hour vidjagame.