Ten Aces - A tactical TBS designed around the player

The game is about ten demigods (the Ten Aces) and their story. In the game you may play any of them as the leader of your army, along with other units.

In single player mode, the player explores the story of the Ten Aces. Each of the Aces will have his own campaign. All of them are unique and original, so that every player will find someone that expresses him. The result of every campaign will depend directly on the player’s decisions. Permadeath will affect both the player’s characters and the AI.

Multiplayer will be an important part of the game. Many modes and systems have been designed. Great emphasis has been placed in the balance between the players. 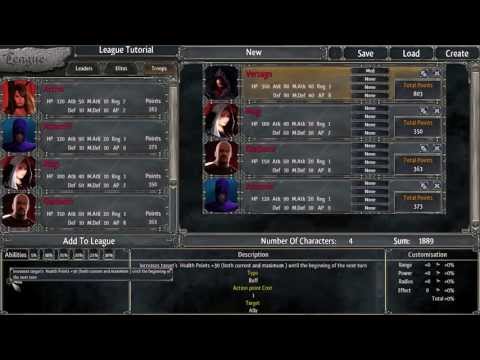 Ten Aces combines strategic elements from games like Warhammer, Fire Emblem and Disgaea,deep and intriguing characters like the ones in the Final Fantasy series, and a story from an awesome D&D campaign. We have tried our best to combine elements from the games we love, creating a whole new game. This is a game for those who like to challenge themselves, and win because of their skill, and not their luck.

Based on that, any kind of random events were excluded from the game. But in a game where strategy is everything, players must always fight in equal terms. And thus, a point based system was developed guaranteeing that all battles will be balanced. Also stats had to be simple so that players may calculate the outcomes with ease. And last but not least the abilities were added. The abilities is what adds an incredible depth to our game.

A small Battle in progress

A huge battle in progress

Keep in mind that this is an early stage demo and our intention is to improve graphics and other aspects of the game. To achieve this, we need your feedback. Soon, we will release a questionnaire in order to collect a more targeted feedback.