Valkyria Chronicles
Valkyria Chronicles is a series of games set in a fictionalised World War 2, with a narrative drawing heavily from traditional war dramas, albeit with an anime twist. Whilst undoubtedly in the JRPG genre, the gameplay derives from tabletop wargaming, with a strategic map showing placement of units and a Command Point system being used to move them. Once a unit is selected, movement and firing is in third-person perspective. Despite the game's age, it still looks a treat thanks to both the CANVAS engine's unique and heavily stylised shader technology, and the wonderful visual design provided by the artist Raita, renowned for his previous work in mechanical design and fantastical war machines (among other things). Numerous mechanics give the games in the series quite some depth beyond the tactical map, such as:

Recruitment and Traits:
The player must select 17 soldiers from a large roster of possible recruits belonging to five classes, with each soldier having their own traits that affect them on the battlefield. Picked a raging antiSemite antiDarcsen and deployed them next to a Darcsen on the battlefield? They'll suffer a penalty to their fighting ability, they won't help with covering fire, and they'll bitch a bit. Likewise, a sniper with pollen allergies might not do so hot in a forest. Check back at the Headquarters from time to time during the story, as new possible recruits will occasionally be available.

Experience:
Experience points can be gained via main story missions and skirmishes, which are single battles that can be replayed repeatedly. You get more experience the fewer turns you take to complete a mission. Experience can be used to level up each class of soldier (Scout, Shocktrooper, etc). Levelling up is done on a class-wide basis, so no worries about trying to keep your soldiers equally levelled with each other.

Money:
The almighty dollar. Earned the same way as experience, it's primarily used to buy new equipment and uniforms for your soldiers, and upgrades to your tanks (yeah, you eventually get more than one). Things like better rifles and grenades for your bodies on the ground, and upgraded treads, canon barrels, and such for the tanks.

Orders:
Commands may be given by the commander to his troops that act as buffs. Increased movement, healing, offense, etc. Not going to lie, these are occasionally rather broken, so use at your own risk.

Camps:
The objective in missions is to take control of the enemy camp while stopping them occupying your own. The amount of bonus money and experience you get is determined by how many turns it takes to capture those of the enemy, and captured points can be used to call in reinforcements from your recruited soliders. The game that started it all. Originally released for PlayStation 3, it now has a happy home on PC. Released on Steam with an excellent port, it very much deserves a purchase. Follows the saga of Squad 7 of the Gallian militia, focusing on Alicia, a former baker from the small town of Bruhl, and Welkin, the unassuming son of a late general who comes to command the Edelweiss tank.

Note that the PC version also comes with the DLC released for VC1 bundled. They don't directly take part within the main story, but a playthrough is recommended of each. They are:
Selvaria's Mission: Behind Her Blue Flame
Follows a soldier from the Imperial army, under Selvaria's command. A great way to see the war through the other side's eyes, and provides an important new perspective on Gallia.
Edy’s Mission: Enter the Edy Detachment
Edy Nelson sucks, but the Japanese like her a lot, so she ended up getting her own little story. Originally a normal recruitable character, this DLC follows her and a few others after they get separated from the bulk of Squad 7.

For more details on the PC port, the game has an unlocked frame rate option, and selectable resolution. GeDoSaTo can be used to downsample if your PC is up to it, which can make the game look simply stunning (as if it didn't look good enough already). Keyboard controls for combat are also extensively remappable and the game has controller support. Do note, however, that there are a couple of idiosyncrasies; main menu controls are slightly odd (keyboard to select options, click to choose them, but you get used to it quickly), and cutscenes are prerendered 720p movies (but look fine aside from small jaggies).

There is also an anime of VC1. Spoilers: It sucks. Marking a sad shift away from the PlayStation 3 to the PlayStation Portable, this is considered something of a low point in the series. The narrative deviated from the war drama of Valkyria Chronicles 1 to a lighter and largely academic setting, and gameplay utilised smaller maps to cope with the reduced power of the PSP. Saw the introduction of the Armoured Tech class. If you have a tolerance for highschool drama and cliche anime/JRPG characters, it's still worth a look. A return to form, albeit still on PSP. Following Gallian Army Squad 422, a penal battalion with the nickname The Nameless, this takes a darker turn as it follows the trials of the Darcsen Imca, Valkyrur-descendant Riela, and their commander Kurt. Has had a fan translation (that's best not asked about on these forums), given that it hasn't been officially localised thanks to SEGA being, well, SEGA. There's an anime OVA of VC3 as well, and by most accounts it's not half bad. 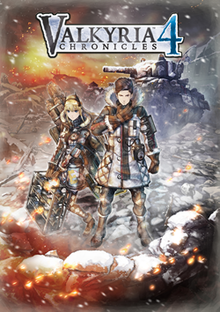 A return to the grand scale of Valkyria Chronicles 1, now following the Allies Atlantic Federation. Something of an analogue to the Winter War of Finland.

The Classes:
Scout
Your eyes and ears. Blessed with a high movement rate, these guys can flit about the map and give valuable information about enemy positions and movements. While their initial armament is light, eventually they receive rifle-mounted grenades, which are very effective.

Shocktrooper:
The workhorse of any unit. They take a lot of hurt and give it right back in equal measure, lugging around thick armour and machine guns. Any Imperial's day will be ruined if caught in the crossfire of shocktroopers crouching behind sandbags. Flamethrowers eventually become available for them, which are just fantastically fun to use.

Lancer:
Basically this universe's answer to the bazooka and other antitank weaponry. Appearing to be armed with a medieval lance, these units are actually carrying rockets that will lay the hurt on enemy armour. Can be used on enemy units in a pinch, throwing them about and destroying cover such as trees and sandbags.

Engineer:
Less about killing so much as facilitating others who do the job, engineers have a grab-bag of useful tricks up their sleeve. This includes the ability to construct sandbag defenses, disarm both antitank and antipersonnel mines, resupply soldiers with ammunition, and repair tanks.

Sniper:
What it says on the tin. Thanks to missed shots and very low movement ability, they tend to be looked upon poorly early on, but they become a monster in the later game with upgrades. Remember to zoom when using them.

Armored Tech:
Only available in Valkyria Chronicles 2 and 3, they're best described as walking tanks. With very high defenses and strong melee attacks, they can smash through the most well-defended of enemy lines. Valkyria, Valkyria
May the bloodline live forever
Valkyria, Valkyria Bless and protect our fertile land
Home to every Valkyria Chronicles game, Gallia is a small coastal duchy sitting atop large Ragnite deposits, the substitute for oil and electricity. Despite a policy of mandatory military service and a draft being instituted, the country finds itself fighting for its life against the juggernaut of the Imperial war machine. Thematically and aesthetically, best thought of as a mix of Belgium and Switzerland. Forward we march
To conquer those who defile the graves of our fathers
For the everlasting glory of the Emperor, king of kings
Lead by our Grace, conqueror of our enemies, king of kings, Emperor Maximillian, the Empire controls a vast territory to the East of Gallia. Acting as the antagonist of the Valkyria Chronicles, the Emperor, along with his triumvirate of generals, invades Gallia to secure their resources with the expectation of an easy fight. Heavily influenced by the geographical position and landscape of the Russian Empire, militarism of Nazi Germany, and the aesthetic of the late Roman Empire. In the name of peace and equality, we join hands in the brotherhood
To defend these ideals from evil! Will we stand and fight?
A coalition of various Western democracies who... you can guess who these guys represent from WW2, really. Jews. No, really. It's not subtle. Any character with dark blue hair is a Darcsen, an ethnic group loathed in the game universe given the rumoured "Darcsen Calamity" that is collectively blamed on them. This can work both against and for the player in battle, as while some characters detest them, Darcsen soldiers will often have a camaraderie bonus for working with others. Often considered smelly, hunched, ugly, and the usual grab-bag of traits associated with 1930s antiSemitism. Being a Darcsen is suffering. Not a lot that can be said about this without heavy spoilers, but suffice to say, Valkyrur are basically a parallel to nuclear weapons. Selvaria Bles is an example of one.