I'm not sure where to begin on this one. Most people are aware of the Alien franchise, where H. R. Giger's detailed, biomechanical, explicitly sexual artwork from Neonomicon was brought to movie-magic life by Ridley Scott & co., spawning a franchise that has gotten progressively stranger. When people think of Alien comics, they probably think of the crossovers with Batman or Superman, or those little roll-up mini comics that came with the toys. 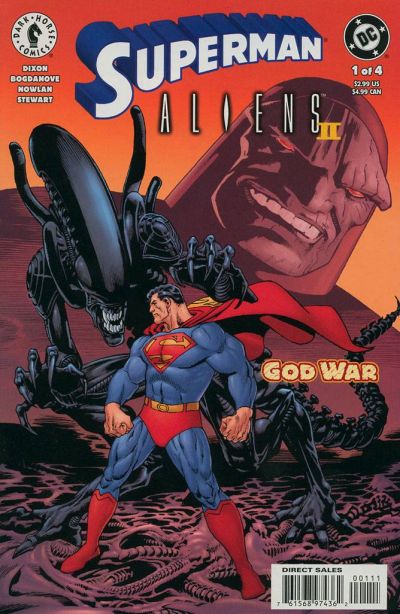 I totally forgot these were also made by Dark Horse.

The thing is, Dark Horse had a relatively novel approach to the Alien comic license. Instead of doing an ongoing series around plucky heroes from the films - slightly difficult but not impossible because most of them were dead by the final reel - they instead decided to approach this as a sort of common subject for a wide variety of sci fi/horror short comics. A bit like licensed fanfiction by really good writers and artists, in point of fact. If there was ever a timeline or connective tissue between the episodes apart from the basic background setting established in the films, I'm not aware of it. These comics never even pretended there was a hard canon. It was immensely freeing in that regard. A lot of them showed up as individual episodes in the comics anthology Dark Horse Presents. 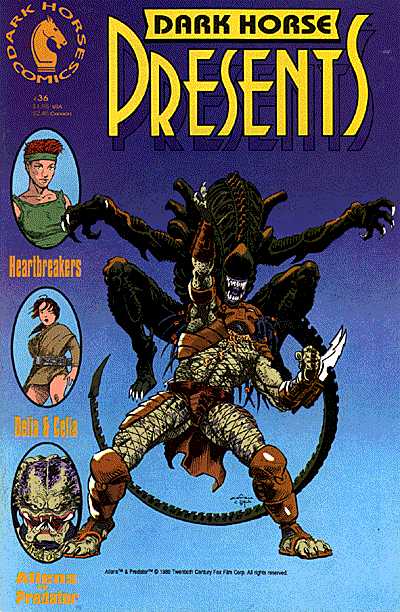 Have I told you lately that I love you?

This standalone trade from 1992 contains five short episodes, two of which are connected to form a longer story. So you've got four creative teams and 48 pages. Game on.

THeORY OF ALIeN PrOPOgATIOn, written by Mark Verheiden and art by Mark A. Nelson, with colors by Chris Chalenor, begins with a xenomorph queen floating in space.

It basically goes over the alien lifecycle. Kinda a nature documentary about a new xenomorph hive being established. It's simple and refreshingly direct. It features human, aliens, and xenomorphs. There's an implicit ecological lesson combined with a oh shit moment. Very solid.

The next two episodes, Advent and Terminus, form a connected longer story. Scripted by Anina Bennett, story and art by Paul Guinan, lettering by Willie Schubert (we never give letterers the credit they deserve), colors by Rachelle Menashe. I have a strong suspicion that this one was inspired by this Giger drawing in particular: 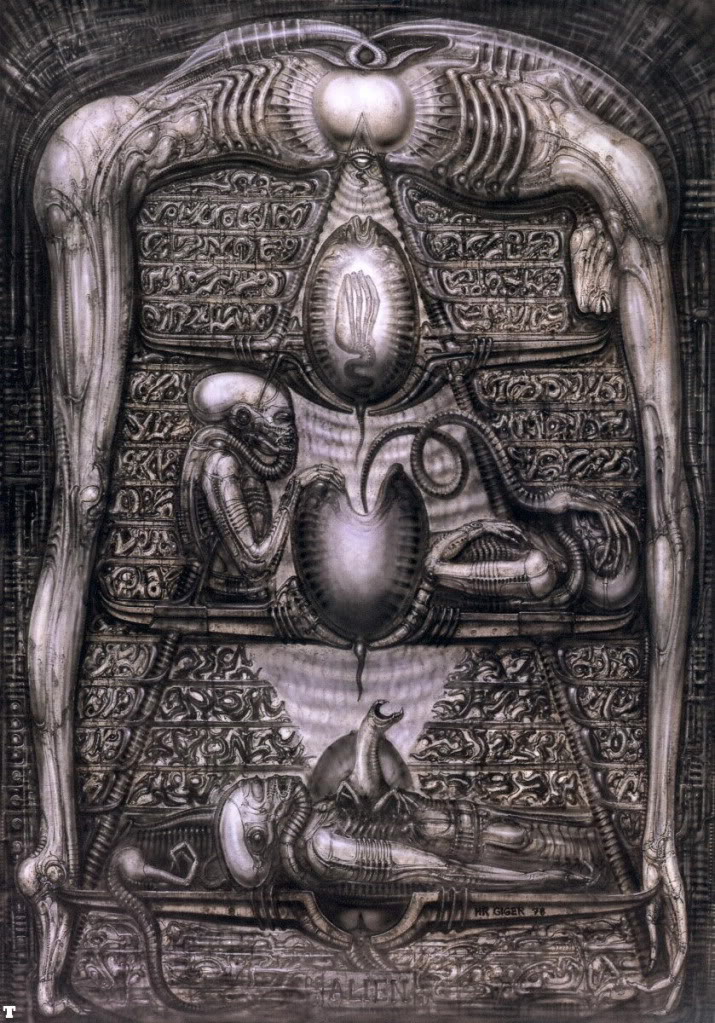 Anyway. A group of stalwart adventurers archaeologists stupid thieves. Humans are colonizing the universe, they come across a pyramid that's got xenomorph eggs in it, and the plucky band of buggered decides they need to get in on that action. Yes, it's essentially a D&D scenario in an alien pyramid-dungeon on a strange world and they knew before setting foot there it contained xenomorphs. This is like watching a replay of Tomb of Horrors. It's fun, even if it plays out about as you expect. Action! Backstabbing! And a worthy Twilight Zone-esque ending where another party of adventurers shows up just as the last member of the expedition buys it. Conga line of death, everybody; roll up new characters.

Reapers is written by John Arcudi, with art by Simon Bisley and colors by Chris Chalenor. I think everybody got lost and thought they were doing something for Heavy Metal, but I'm not complaining. I won't spoil this one, but suffice it to say that it's a very different take on the whole concept. No dialogue, this "silent episode" speaks volumes just in Bisley's facial expressions.

Last but not least is The Alien, also written by John Arcudi, with pencils by Tony Akins, layout and inks by Paul Guinan, lettering by Willie Schubert, and colors by Rachelle Menashe. It's the closest to an actual sequel to the films - or at least the first film, since it mentions Ripley and stars the Pilot. Let's all take half a minute and reflect on the good 'ol days before Prometheus.

Anyway, short is about how a Pilot shows up on Earth, kills a bunch of xenomorphs, and is terraforming his new holiday home. I'm honestly not clear if this came after another episode or if Arcudi is starting in media res; I also don't care. The President of the United States and some other folks go up to his ship to negotiate with him. This turns out to be a bad deal for everybody involved, because the humans are duplicitous assholes. But hey! A lot of our culture-heroes are sneaky jerks. Yes, we call them "cunning," but that's only because we can't get our hands around their necks.

Some thoughts in summation: licensed properties are hard. You have no control over what the people in charge of the movies are going to do. You have no impact on what they're going to do. On the one hand, that's crippling: you're stuck making what amounts to be just a very classless ploy for money based off a popular property. On the other hand, that's immensely freeing: you don't have to care about canon or profitability, so you can do whatever you want. Now, when Dark Horse had the Star Wars license, they largely tried to keep to some kind of continuity, while allowing themselves the flexibility of the comics medium (see also: Tag and Bink, the only Star Wars comics I can read twice). With Aliens, they largely went another way: disconnected sci-fi horror stories with tremendous creative and artistic freedom. This batch from '92 is by no means the best of what Dark Horse had to offer. They put out dozens of comics, in almost as many styles. It was a property and approach uniquely suited to Dark Horse's indie-style, and I would encourage people to read them. Seriously, someone greenlit this. And the world is a better place.

Hell, the Aliens comics are better than all the movies after #2. I like to think that it's because the writers of the comics, by and large, tended to remember the old sci-fi roots of Aliens...the kind of Twilight Zone/Rod Sterling/Phillip K. Dick twist endings or bleak outlook. Yes, humans can win, but it's a temporary victory. The Aliens are like Universal Monsters, however many you kill, more appear in the next episode, strong as ever. A lot of the stories deal with subjects of human arrogance, body horror, man's inhumanity to man, comeuppance, and man-against-xenonature...and those are the kind of stories you typically don't see much of in contemporary comics. But I wish we did.