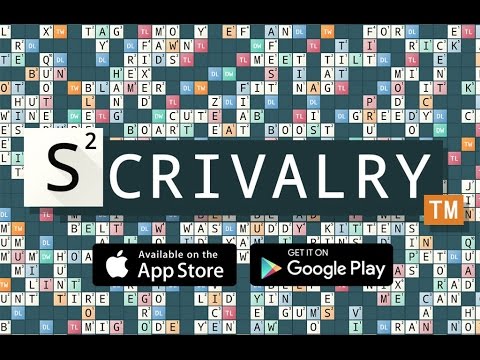 
What is it:
A classic word game where you play letter tiles to form words, but with a twist: The game board is almost 10 square miles in size and players do not take turns like in traditional word games, but play whenever they want. This allows thousands of players to play the game at the same time. Any word played will remain on the board forever and players can see who played a word, its definition and history on the game board by simply tapping the word.

The game keeps track of your personal statistics and rankings, so that awesome word you played for a ton of points will always be remembered and visible to other players. Expand you vocabulary and see how well you do compared to others or focus on getting the highest average score per turn possible.

Scrivalry also features a competitive tournament system in which players try to score as many points as possible in 10 turns. A new tournament starts every week and the highest scoring players receive a medal to commemorate their achievement.

The game is free to play for the next few weeks on iOS. For Android it is not possible to offer the game for free for a limited amount of time so I will be giving away a lot of free codes instead. Since I don't want the codes to go to some scraper just send me a message and I'll give you a code.