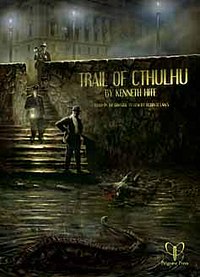 It is 1934, the global economy is in Depression and the people are reeling from the Great War and the Spanish Flu. Fascism and Communism are on the rise in Europe and America’s breadbasket is turning into a desert but at least you can finally get a drink again. The world is becoming stranger, and there is a sense of dread everywhere. In New York City the rise of strange cults and weird events hasn’t gone unnoticed by the police. Certain officers end up getting reputations as being go-tos when weird shit happens. It’s not the kind of stuff they teach at the academy though, so a loose network of civilian consultants, experts in the occult, science, history, have come about to assist the police in their investigations.

Two people have both been brutally murdered and their bodies discovered today. You have all been brought in to investigate the crime due to your past experience or expertise in odd matters like this. Bring the perpetrator to justice, or at least stop more murders, and try not to die or go insane in the process.

Trail of Cthulhu
Trail of Cthulhu is an investigation based game taking place in the world of H.P Lovecraft's Cthulhu Mythos. While similar to the Call of Cthulhu RPG it uses the Gumshoe roleplaying system.
If you are not familiar with Trail of Cthulhu a condensed version of the rules is available at the publisher's website along with a helpful guide. If you do have the game note that the condensed rules incorporate some elements from the 2nd edition of The Esoterrorists that we will be using when applicable. It is possible to create a character and play with just these resources. Let me know if you do not have the rulebook though, so I can fill you in on things as they come up.

Character Creation
We’ll be using one the campaign from Arkham City Detective Files, which actually takes place in New York City. Characters should be residents of the city and have a connection with the police. This could be as a police officer, another employee of the city, or as a civilian consultant. It’s assumed that all the characters run in the same circles and know each other at the start of play and have a reputation for dealing with weird stuff. I’d prefer if at least one person plays a police officer and one civilian consultant.

I am hoping to have a relatively fast moving game for a pbp so I would prefer if you could post at least five times per week. In order to avoid things getting bogged down as well I also am only looking for three players, so you will each have 18 Build Points in Investigative Abilities. We will also be using the Sources of Stability optional rule, for each 3 ratings points in Stability create an NPC who your character has a relationship with. A quick one sentence description like “My Mother who I have lunch with every Sunday” is enough but more is good to. At least one of these Sources should be a backup character in case your starting character dies.
Stability, Sanity, and are capped at a rating of 12, as per the Purist optional rule.

If you are playing from the Condensed Rules you will not be able to see the unique ability each background has. These are relatively minor and I will tell you the ability from your chosen background.

Game Tone: Trail of Cthulhu distinguishes between Pulp and Purist adventures, and this will be more on the Purist end of things, though using a mix of the optional rules. Even minor Mythos creatures are a grave threat to your health and sanity and a real victory may not be possible. That said a resolution to the mysteries is always going to be possible, and investigators can make the world a safer place.

A note on Player Death. I think this is an important topic to make sure everyone is on the same page with. Death will be a very real possibility in the game. Even a relatively simple fight could end with a character dying. Characters may also be driven insane by their exposure to the Mythos and be unable to continue their investigation. If this happens one of your Sources of Stability can be brought in as a replacement character.

So that's the lay of the land detective. You can back out now if you want, no one will think the less of you. Or you can keep going, try to figure out what's really going on in this city, stop some murders, and maybe even save the world. What'll it be?
0