Oroville Dam is the tallest dam in the United States, measuring 770 ft tall (44 ft taller than the Hoover Dam) and containing a water supply (Lake Orville) of over 3.5 million acre-feet (4.4 km3). In addition to providing hydroelectric power, the resevoir of Lake Orville provides water for over 25 million people and is a key component of the Central Valley Project. Conceived of during the New Deal era, the CVP is a federal water management program to provide irrigation to California's Central Valley. The Dam itself was started in 1961 with work completing and the dam coming into operation in 1968.

Now, normal operation of the Oroville Dam includes the operation of a spillway, a mechanism by which water can be released from the resevoir to lower the level of the Dam and ensure it doesn't overfill during periods of lots of precipitation. This is what the spillway should look like when in operation:

This, meanwhile, is the current state of the spillway (as of Friday or this weekend): There should not be a gigantic sinkhole there.

However, the Dam does have a backup plan in case the main spillway has a problem. That would be the Emergency Spillway, which is basically a fancy way of saying "letting the Dam overflow a part a little ways up from the regular spillway and flow down the hillside until it eventually hits the Feather River." For the first time in the history of the Oroville Dam, the California Department of Water Resources used the Emergency Spillway this weekend: 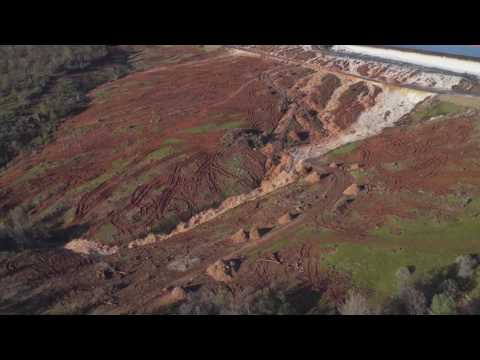 Unfortunately, they put a stop to this not long after using it. Turns out, there were concerns regarding erosion at the base of the earth near the Emergency Spillway and they did not want to run the risk that the retaining wall that makes up said Emergency Spillway would erode and collapse, releasing a metric fuckton of water at once down the hill. Because of this new problem to an already serious issue facing the main Spillway, an evacuation order was issued for 188,000 people downstream:


As of Monday's press conference, this evacuation order is still in effect and with rain still projected for the coming week, it's unknown as of yet when they can return.

This would all be problematic, and not necessarily be a crisis, except for the fact that it will not stop raining in California. Here are the current resevoir levels throughout California: So, Lake Orville's been sitting at 150% of historical average and bobbing between 95 and 101% capacity. Current weather expectations for the upcoming week: more rain. What this means for the situation is that notwithstanding said hole in the spillway, the Dam itself can't not run water down the spillway. Officials need to run water down the damaged spillway in order to reduce the Lake's current capacity not only because it is historically overfull, but also to make room for future rain that just won't stop falling. This, naturally makes the sinkhole problem worse, as water continues to extend the size of the hole (which when it first appeared, only covered half of the spillway and not an entire chunk as well as half the hill on either side that you see in the picture above). Edit: Here's a nice side-by-side comparison of what's happening as they have to run water over it: In terms of what could be done, the press conference that was held today (an update on the evacuation and the current status of the Dam and situation in general) had multiple reporters asking questions of whether officials knew about a 2005 request by environmental groups, including the Sierra Club, that suggested the spillway be armoured with Concrete over fears of its integrity. Given the current massive sinkhole spreading across the spillway, expect to hear more of this report as the crisis develops, and in general of the potential problems with critical infrastructure this old not receiving sufficient maintenance attention.