Registered User regular
August 2017 in Help / Advice Forum
Hello all,
I'm a long time lurker who hopefully has something to offer Child's Play, though I'm undecided on if it is of any interest or value to anyone. I was rummaging through some boxes in the garage and made a familiar discovery I'd like to offer up.

My first, and only, PAX was In Boston, 2010. The first PAX East, which I was able to attend from the UK due to being single and childless at the time. I am neither, now. I thoroughly enjoyed the experience, spending the weekend on a nostalgia trip and riding emotionally fulfilling highs among the people, sights and sounds of the event. On the first day, within the first hour of the event following a flight from the UK only the day previous, I was fortunate enough to walk straight into Gabe and Tycho themselves. In my giddy, starstruck state I forgot to ask for autographs and what I had read literally that morning, the strip on PAX etiquette. As such I went straight into a handshake only to be greeted with an elbow. One red faced elbow rubbing later, I walked away with the below picture, one I'm proud of to this day. 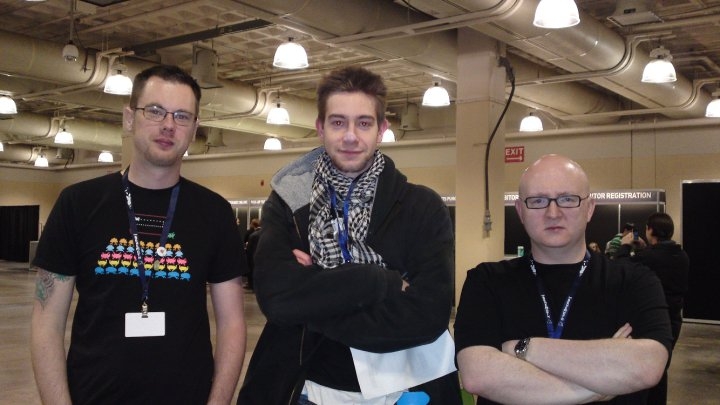 And so followed PEast, as we named it. The effort people had made was amazing, I only wish that logistics did not play such a role that they prevented me from doing the same. One individual was the PAX Witch who I was lucky enough to shoot a small video with. During the event there was an audience with G&T at which Gabe said he was impressed by her. By chance, he was later walking through one of the floors of the Hynes and I was able to show him my footage. He asked I send it onto him, after which he posted to PA front page and sent my YouTube hits through the roof. I was able to grab a signature at that point, too, and so had one half of the pair.

On the final day we were given pipe cleaners to while away the wait for the closing audience. I made a large PAX "X" out of them, however didn't think to take a photo. As we stood to enter the hall, rumour was a rare Tycho was lurking in the behind scenes areas, so a couple of us popped our heads in. I was able to trade him my "X" for his signature. The event then closed and I left happy with my story and included encounters. I've longed to attend one since. Maybe one day when family needs are met and work isn't such a burden.
So, I'd like to see if there is any worth or interest to you fine peeps on the below items? If I send them to Child's Play, will they be desired at some sort of auction in the future?