The line will be anchored by the return of Impulse (Bart Allen) and Superboy (Conner Kent), teaming up with Robin (Tim Drake) as the nucleus of an all-new YOUNG JUSTICE, which Bendis will write with art by his ACTION COMICS partner in crime, Patrick Gleason. As a tease for his Saturday evening spotlight panel, Bendis also announced the rest of the first wave of titles:

The four titles will feature mix revivals of existing characters and concepts with all-new material and new incarnations of familiar identities and names. The flagship of the line will be Young Justice, written by Bendis, which teams Robin (Tim Drake, who Bendis called “the best Robin), Impulse and Superboy (Connor Kent, the 1990s version of the character) with a number of new characters, including Ginny Hex, a descendant of DC western character Jonah Hex, and Teen Lantern, a young girl from Bolivia who has figured out a way to hack the power battery of the Green Lantern Corps. Although it was not revealed at the panel, DC has since revealed that the artist on the series will be Patrick Gleason.

Other titles in the line include revivals for the cult Super Friends characters the Wonder Twins, written by The Flintstones’ Mark Russell with art by Stephen Byrne, and classic 1950s comic book Dial H for Hero, written by Sam Humphries and illustrated by Joe Quinones. Additionally, the line will feature an all-new creation, Naomi, co-written by Bendis and Nighthawk and Bitter Root’s David Walker, with art by Jamal Campbell. The line will launch in January 2019 with the first issues of Naomi and Young Justice.
Not the biggest Bendis fan but i'm definitely gonna read that Young Justice title for Gleason's art!

Also, we're looking at the glorious return of 90's Superboy (the best Superboy) 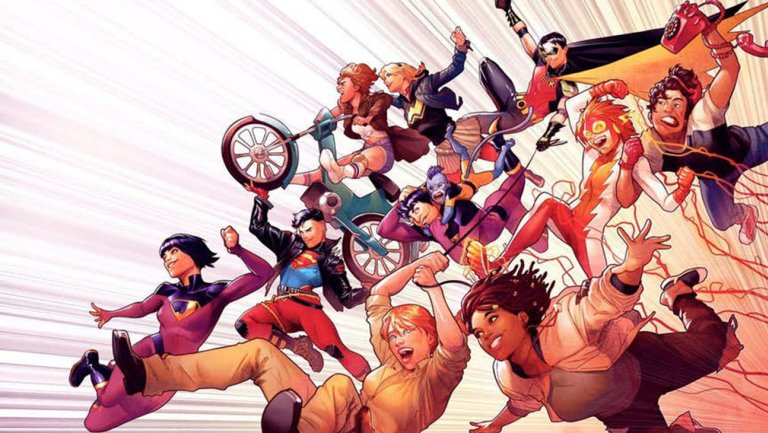 Probably gonna be a pop-up imprint like Young Animal was, expecting maybe a 12 issue run for a few of these.
Tairu on October 2018
0