On the PAX Unplugged schedule is listed a tournament for Twilight Imperium. At the time the schedule was released, we were unsure whether that would be TI3 or TI4.

I am happy to announce that we will be playing the event using Twilight Imperium 4!! 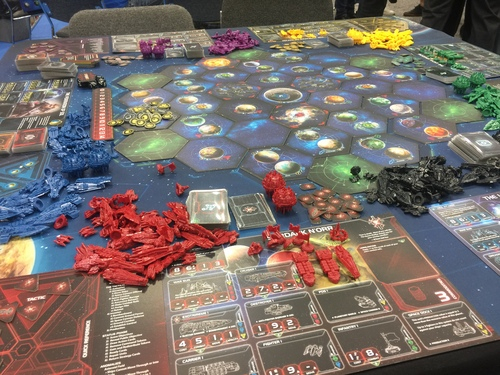 If anyone wants to chime in to express their interest in playing it, and prep by looking over the rules, there is a Learn to Play PDF on the FFG site, at: https://images-cdn.fantasyflightgames.com/filer_public/f3/c6/f3c66512-8e19-4f30-a0d4-d7d75701fd37/ti-k0289_learn_to_playcompressed.pdf

As with all PAX official events, registration is done on-site on Friday at 10am (first come, first serve - no pre-show signups), and is set to begin at 12pm Friday. But we do plan to offer up to all 6 seats for this game, and it will require a bit of advance knowledge of how to play.

This is the kind of experience you might only ever get to do at a convention like PAX, and even though games of Twilight Imperium are notorious for lasting for hours, at the past few PAX shows we've put sessions of TI3 on the schedule, and they have all filled to capacity, even had a waiting list, and caused us to run a second session of it on Saturday (and this is possible at Unplugged too, if there is demand).

Do you have what it takes? Feel free to add your name here, so we can all gauge interest, and get hype for being able to play Twilight Imperium IV before it's available at retail stores.
Lackey on October 2017