DIY help: fixing and re-drilling a hole in plaster ceiling

Registered User regular
October 2021 in Help / Advice Forum
Today I tried to install a hook in my ceiling from which to hang a planter. Emphasis on "tried."

First things first: I rent, but I am explicitly allowed to put holes in walls/ceiling to hang stuff, so I'm not in violation of my lease. Also, I figure if I lose my security deposit, it'll be worth the education

Now that that's out of the way: my building was built in the 40s (we think) and has these old-style plaster archways. I want to hang a potted plant in one of the arches, so I tried to install a hook using a toggle bolt. I bought an eye bolt with the same diameter and thread as the bolts that came with the toggle, since ceiling hooks with a single mounting hole seem to not be a thing.

I used a magnet to check for metal framing, then drilled a small exploratory hole, also to check for metal. So far so good. Drilled the required 1/2" hole, and... there's not enough space behind the plaster to install the bolt. There's about 1/2" of plaster and lath, another 3/4" of void, and then what I think must be solid wood, since it's at the top of the wall.

So, now what? First I need to patch the hole, obviously; but I still want to put a hook there. Can I drill through the patch and into the horizontal beam to screw in a bolt there? Do I need a particular filler/paste/etc. in order to be able to drill it? Where do I find a swag hook with an extra-long screw (to cross the ~1.25" of plaster and air between the arch surface and the beam) that is NOT a molly or toggle bolt or drywall anchor? Is this just a bad idea for reasons that haven't occurred to me? The only other experience I have with this kind of thing is hanging a whiteboard, also on a plaster-and-lath wall, with one mounting bracket attached to a toggle bolt and the other screwed to a stud. Probably overkill, but I figured better that than have the thing fall down and damage the wall in the process.

Again, this is plaster, not drywall. Solutions for drywall are not applicable unless they specifically work for plaster also.

The arch in question, with the hole circled: 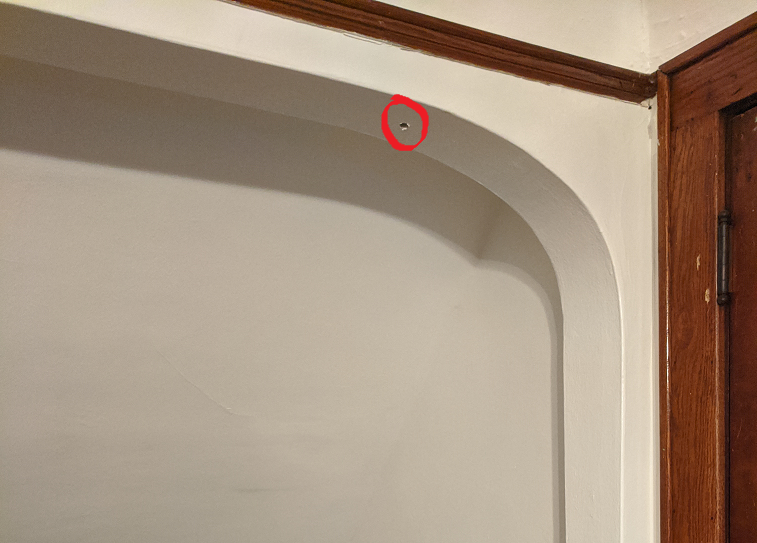 Closeup of the hole, for what it's worth (the smaller hole visible in the beam is where I accidentally hit it with my 1/8" bit while checking for metal arch framing): 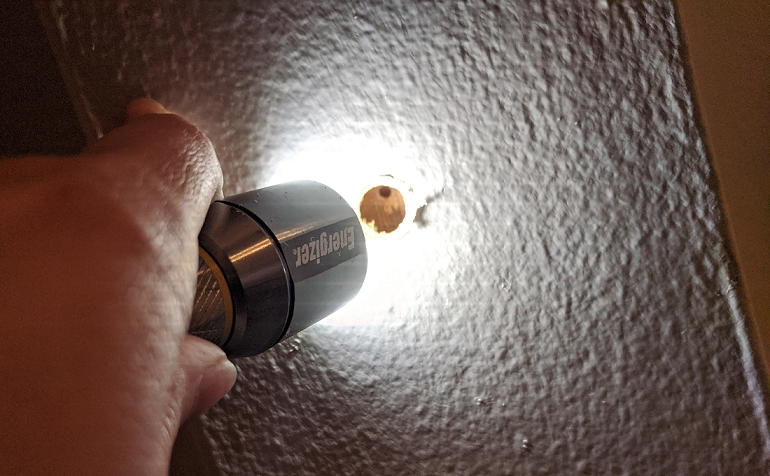 Any advice is appreciated!