[Dwarf Fortress] Hate the ASCII graphics? Want to de-ugly your fort? Here's how!

Registered User
April 2010 edited September 2010 in Games and Technology
Howdy. I'm new to these forums, though not new to forums in general. I originally tried to post this Friday night. The board software flagged it as possible spam because I'm a new user and the post contains several links. Instead of putting the thread up on the forum, the board software moved the post to a "must be manually approved by a moderator" queue. After some further discussion with the moderators via PM, they have given me permission to post this as a separate, stand-alone thread.

It has come to my attention that SOME of you (and you know who you are) are intrigued by Dwarf Fortress and the stories it generates, but you are put off by the eye-fucking ASCII graphics. This post will show you how you can adjust the graphics and perhaps find something more suitable to your personal aesthetic.

Dwarf Fortress is what it is. And what it primarily is is a roguelike with an overactive pituitary gland. Roguelikes are games like Nethack, ADOM, and Angband. These games use ASCII graphics without a shred of remorse, and DF is no different. You can improve the look of DF, but even under the best of all possible circumstances, it's still going to look like an 8-bit Nintendo game.

The other thing about Roguelikes is that they have a certain "do-it-yourself" attitude, and again, DF is no different. There are no option screens with handy check boxes or radio buttons. Making DF conform more to your personal aesthetic will require editing some text files, mostly the /data/init/init.txt file.

If you are allergic to Notepad, or if the idea of reading the entire rest of this post makes you flinch, you may simply download this pre-configured version of Dwarf Fortress right here: http://www.infinitecities.com/DF40d16_de-uglied.zip. The upside is that you won't have to read the rest of this post, and you won't have to muck about with editing text files and downloading tilesets. The downside is that the linked version has been pre-configured by me, so you're stuck with my personal aesthetic choices if you don't want to read the rest of this post, or if you don't want to muck about editing text files and downloading tilesets. Which may or may not be a problem for you, depending on how closely your personal aesthetic matches my own.

If you're determined to play v31, you can use this thread to guide your efforts in that regard, but there are some additional wrinkles to deal with. I will cover these wrinkles near the end of this post.

Now, having said all of that, on with the show.


The Many Faces of Dwarf Fortress

All of the screenshots below show the exact same thing. 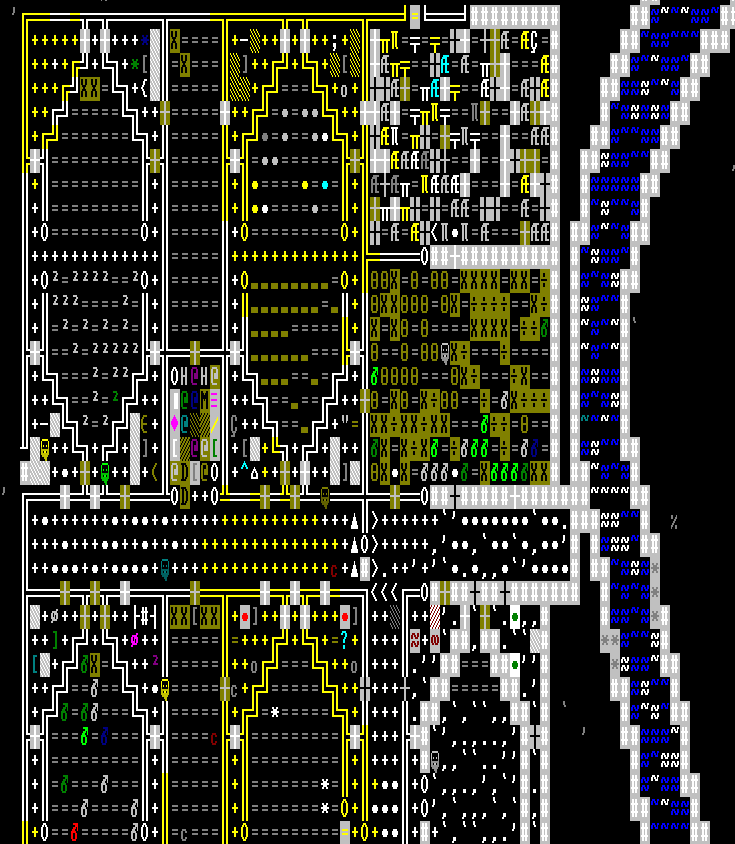 So, as you can see, you have more choices than just the default eye-fucking ASCII graphics for your d0rfing pleasure.

There are four components to the Dwarf Fortress graphical interface: Tilesets, Graphic Sets, Color Schemes, and Raw files. There is a text file called init.txt. It is located in the /data/init directory off of your main DF directory. One of the flags in the init.txt file is [GRAPHICS:] flag. If you want to use a Graphic Set for your critters, you will need to set that to [GRAPHICS:YES]. Otherwise, it should be [GRAPHICS:NO].

PROTIP - Any changes you make to the graphic elements of Dwarf Fortress won't show up until the next time you restart Dwarf Fortress. If you want to try out several different changes in a short period of time, the quickest way to do so (if you're running Windows) is to keep your Task Manager open to the Processes tab. That way you can kill the Dwarf Fortress process rather than waiting for it to save before you can exit.

Because of this lack of standardization, manual installation of Graphic Sets is not straightforward, and will not be covered by this post.

However, most Graphic Set designers either provide an automatic installer for their Graphic Set, or they configure a working version of Dwarf Fortress to use their Graphic Set and then make that pre-configured version of Dwarf Fortress available for download (much like I did earlier in this post). Some of the more popular Graphic Sets, along with links to instructions or installers or full downloads for these sets, can be found here: http://df.magmawiki.com/index.php/40d:Graphics_set_repository.

If you plan on using Graphic Sets for your critters, I recommend doing this step first.

You have to have a Tileset to play Dwarf Fortress. If you don't, everything will be black, which presents many (probably insurmountable) challenges.

As you can see, it's just ASCII. ASCII letters, ASCII letters with diacritics, other ASCII symbols, and rudimentary ASCII shapes.

Some clever people, however, realized that you could edit these tilesets and replace some of the ASCII with sprites, e.g.:

And from this realization comes the variety of pictures above.

Changing your tileset sounds complicated, but it's actually pretty easy once you do it a time or two.

Step 2: Find a tileset you like. Right-click on that tileset and download it into your /data/art directory.

Step 3: The tileset you just downloaded will most likely be a .png file. If you are using any version of DF prior to 40d16, you will need to convert any .png files to a .bmp file.

Step 4a: If you aren't using a graphic set, then look in the init.txt file for the text below (or something very similar). Once you find it, change the font filename to whatever tileset you want to use, in windowed or fullscreen as appropriate for your preferences.

Step 4b: If you are using a graphics set, look for the text below (or something very similar) in your init.txt. Again, depending on your windowed/full screen preferences, put the filename of the tileset you want to use into the appropriate font line.


And voila, you have updated your DF tileset.

PROTIP - As you may have noticed, these lines are also where you can permanently change your resomolutions. In 40d16, you can change the size of your window in windowed mode with your mouse, but it won't remember the new size the next time you start the game. To affect a permanent change, muck about with these numbers.

Color schemes control the color of everything in Dwarf Fortress EXCEPT the Graphic Sets. The color scheme controls how green your grass is, how blue your water is, what color your rocks and walls are, and things of that nature. Of the screenshots above, the 2nd screenshot and the 2nd-to-last screenshot were made with DF configured to use a variant color scheme, while the remaining screenshots were made using DF's default color scheme.

These are the RGB values for the 16 colors that, for lack of a better explanation, DF "understands". It's possible for DF to display more colors than that if the tileset has been designed to do so. But for the default tileset, these 16 colors is all you get. So if (for example) you don't like the default DF yellow, you can change the values for YELLOW_R, YELLOW_G, and YELLOW_B to give you a different yellow more to your liking.

Raw files (specifically, the files in /raw/objects) contain a lot of data for how DF behaves. With the specific context of DF graphics, there are a few files that govern which tiles in a tileset are used to represent specific things.

If you visit the Tileset repository linked above, you'll see the tilesets categorized into sets which require you to edit the raws, and tilesets which don't.

PROTIP - The de-uglied version of DF I linked above uses a tileset that requires edited raws. The original raw files are in the /raw/objects directory with the .BKP extension.


Additional Wrinkles With the New Version

All of the foregoing will work with the new version, with the following caveats/exceptions:

When you create a new world, the new DF will make copies of your /raw/objects file in the /save/region folder. So if you want to change the graphics for previously created worlds, you may have to edit the raw files for each region if the changes require edited raws (or if you use edited raws and want to change to a tileset that uses the default raws).


And There You Have It

Happy d0rfing!
Have you found yourself reading Dwarf Fortress threads and thinking to yourself "Gosh! I would love to play this game! But the default ASCII graphics make me want to claw my eyes out and pour quartic ammonia into the bloody, empty sockets!"?

Well today may be your lucky day...
Extreme Unction on September 2010
0