Kasumi is out, and she rocks: http://www.gametrailers.com/video/kasumi-trailer-mass-effect/63466?type=flv

Even the robot butler! LET THERE BE ALT COSTUMES!: Wiki wrote:
Mass Effect is an award-winning, bestselling series of science fiction RPG third person shooters developed by the Canadian company BioWare and released on the Xbox 360 and Microsoft Windows. The first game takes place in the year 2183, with the player assuming the role of an elite human soldier named Commander Shepard, set out to explore the Galaxy on a starship, the SSV Normandy. The Xbox 360 edition was released worldwide in November 2007 published by Microsoft Game Studios. The Windows edition was released on May 28, 2008, published by Electronic Arts. The first downloadable content package, Bring Down the Sky, was released on March 10, 2008 (with a PC version released on July 29, 2008) The second downloadable content package, Pinnacle Station, was released on August 25, 2009 for the PC and Xbox 360.

End-game hot tips:
Garrus has a high defense (in that he will protect more characters), but he will actually die before Legion, Samara, and Thane. Thane is third in line after Grunt and Zaeed when it comes to surviving.

A developer stated that Thane was originally going to have the third highest defense, but when they remembered Garrus' recruitment mission, they switched their defense scores out.

But Garrus will still die before them.

It's in the game files, and BioWare released a Suicide Mission guide on it.

THEY ARE PRETTY, YES. BUT THEY HAVE ALREADY BEGUN A CULTURAL STAGNATION. UNFLAVORFUL AND BLAND I DEEM THEM

salarians come in, ambitious, but under the influence of asari cease progressing as well

OH GOD THEY'RE LIKE POP ROCKS. TOO BAD THEY DON'T LAST LONGER....ANYONE ELSE GOING TO JOIN THE PARTY?

no? oh well guess i'll drop the voice effects it's not like these rachni can appreciate them anyway. ok you bug queens guess i'll trigger this purge early. not much this time around but that's just the way the cookie crumbles. wish you buggers were worth more to me than as a puppet race...ah nevermind

dammit, they didn't even register on my spacefaring, relay-using species list! D: looks like this plan ain't gonna work retreeeat

also very odd i sent the signal to open the citadel relay but it didn't work. UPSETTING.

also dammit that was the loss of a good puppet race D: indoctrinate the queens and everyone follows ugh ugh where am i gonna find another one oh well

ooo turians OOOO they didn't even get to the citadel until they were already worth harvesting? OMFG you guys ALONE are worth this purge i gotta let the guys know~

mebbe they'll give me a puppet race or something too!

OH HO HO SENTIENT TOASTERS YOU SAY? I CAN WORK WITH THAT! NO I DON'T CARE THAT THEY HAVE FLASHLIGHT HEADS

hmm humans? well they're no krogan i don't think i have to worry about them much hahaha

did the guys bother to tell me about that? nooooo they just get to point and laugh, specially that bitch harbinger. DENY ME ACCESS TO THE COLLECTORS WILL YOU? YOU JUST WAIT

HOW BOUT I LEAVE YOU ALL IN BLACK SPACE HMMM?

i was just kidding guys- ah you don't have to bring that up-LOOK I SAID I WAS SORRY.

who the fuck is this shepard person?

ok, WHO the FUCK is this SHEPARD person?

OMFG WHO THE FUCK IS THIS SHEPARD PERSON. I AM GOING TO HAVE A CHAT WITH THIS HUMAN.

blah that didn't go as well as i'd liked. doesn't matter anyway, me and my flashlight heads are in the backdoor. the guys will like the taste of the turians and it's just gravy if i get to personally stomp out this humanity species too. GOD they can be ANNOYING.

OMFG SHEPARD I SWEAR TO GOD

WHAT? DON'T LOOK AT ME THAT WAY GUYS, WE ALL AGREED THAT SOVVY WAS TOO INCOMPETENT TO USE THE COLLECTORS.

SHEPARD'S DEAD ARE YOU HAPPY? GOOD.

WHAT NOW. YOU WANT TO USE THE HUMANS? WHAT ARE YOU, OUT OF YOUR BIOMECHANICAL MINDS?

shepard is in the collector base. ah shit. ah SHIT SHIT SHIIITTTTT

look, i'm sorry guys i didn't mean for that to happen. YES i know that was our backup plan. YES i know we don't have any "spare" puppet species. YES i know just how much energy we spent on the collectors and on that base.

just....leave me alone. i gotta think.

Want to play the class of kings? How to Vanguard 101

Just imagine that every post is being spoken in this tone.Airquotes

And the only true romance: Is that a new hairstyle?

Kasanagi's early Christmas present to us; a mod that turns the widow into a fully automatic death machine:

Kasanagi wrote: »
If you so desire, I have packed all of my ini mods into this and uploaded it.


Are you on your second+ game? Stop sweating the small stuff and install this: http://www.masseffectsaves.com/mods/kbo.zip

Just drop this in your Mass Effect 2 install folder under \BioGame\Config\PC\Cooked\ , make sure to backup your current coalesced.ini first, just in 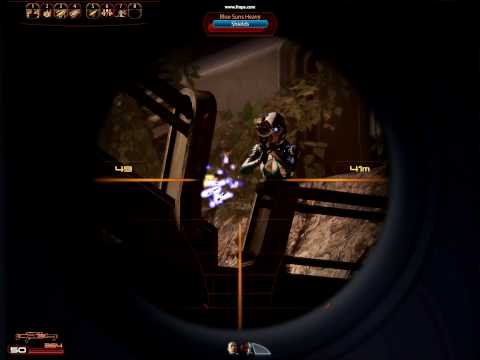 WE HAVE A NEW ONE!

Dox the Most Illustrious Private Investigator

the Curly is a Sucker for Sci-Fi Foundation