[Supernatural]: This is why we can't have nice things, Sam. 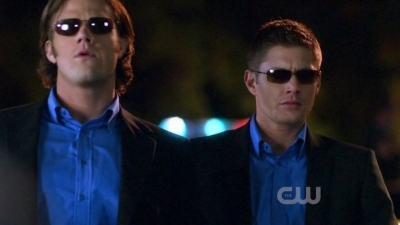 Supernatural is a drama/horror television series about brothers Sam (Jared Padalecki) and Dean Winchester (Jensen Ackles) who travel around Vancouver the US saving people and hunting evil things like ghosts and demons. Along the way they meet some crazy new enemies and allies and nearly every female character dies. Classic rock plays throughout.

It airs on the CW on Wednesdays at 9 PM Eastern.

The Road So Far:

Season 1
Brothers Sam and Dean Winchester team up to find their father, John, who went missing on a hunting trip. However, their father isn't a typical hunter: he hunts supernatural creatures like ghosts, vampires, and various demons and he's trained his sons to do the same. Along the way, Sam and Dean save innocent people, fight creatures and ghosts, and collect clues to their father's whereabouts. Sam begins to mysteriously develop psychic abilities and visions as they travel. They eventually find their father, who reveals that the creature that killed Sam and Dean's mother years earlier is a yellow-eyed demon and the only thing that can kill him is a legendary gun created by Samuel Colt.

Season 2
Sam and Dean deal with their father's death and continue to hunt the yellow-eyed demon with assistance from new allies Ellen, Jo, and Ash. Part of the demon's plan is revealed as he gathers Sam and others like him, leading to Sam dying. Dean makes a deal with a crossroads demon to bring back Sam in exchange for his soul, which will be collected in one year. In a final confrontation, in which Dean kills the yellow-eyed demon, a hell's gate is opened, releasing numerous demons from within.

Season 3
Sam tries to save Dean from his deal while they track down the demons that were released from the gate. Along the way, the brothers meet a demon named Ruby who has an interest in Sam and claims to be able to help save Dean. Also, they meet Bela Talbot, an "acquirer" and seller of occult objects and constant thorn in their side. The brothers eventually learn what demon holds Dean's contract: Lilith. They, along with Ruby, track her down and attempt to kill her. Lilith is unable to stop Sam due to his mysterious abilities, however, Dean's contract expires and his soul is taken to hell.

Season 4
Dean is rescued from hell by an angel named Castiel; one of many angels that appear throughout the season. The brothers work with him to stop Lilith's plan of breaking the 66 seals, which would allow Lucifer to walk free. Sam and Dean's relationship is strained as Sam starts siding with Ruby over Dean. He also begins to give into his demonic side by drinking demon blood to become strong enough to defeat Lilith. After tracking down and killing Lilith, Sam learns that her death is actually the last seal and that Ruby was deceiving him all along. Dean arrives too late to stop him, but kills Ruby as Lucifer's prison opens up beneath them.

Season 5
The brothers fight to stop Lucifer and save the world from the Apocalypse. Dean and Sam battle angels and demons as they fight their destiny to become the vessels of Michael and Lucifer. Unable to defeat Lucifer, they collect the rings of the Four Horsemen, which act as the keys to Lucifer's prison. The idea of destiny versus freedom and choice play a big role. Throughout the season, Dean, Sam, Castiel, and Bobby each have a crisis as they near giving up. However, through each other's support, they continue forward until the end.

Season 6
A year passed since Sam went to hell. Dean attempted to live a civilian life, until Sam mysteriously returns without his soul. It takes Dean bargaining with Death to get it back. Castiel, desperate and at war with Raphael, forges an uneasy alliance with Crowley to open Purgatory and steal the souls for power. The brothers try to stop Castiel but he refuses to listen and instead removes the wall in Sam's head that was keeping back his memories of hell. In the end, Castiel takes in all the souls and kills Raphael. He declares himself the new God and commands Sam, Dean and Bobby to bow down before him and worship him.