What a lovely day for teaSecret British ThreadRegistered User regular
November 2014 edited November 2014 in Singularity Engine++
HEY YOU GUYS PLAY WITH EACH OTHER
https://docs.google.com/spreadsheet/ccc?key=0AtnkIjN6PVE0dGxuSWtOX2FNVVlLSXhrSUQ0ZmRsbXc&usp=sharing#gid=0
THE LIST

FILL THIS SHIT OUT IF YOU WANNA PLAY WITH OTHER NERDS
https://docs.google.com/forms/d/1kC0Ma9q9C-jEGXGgLYuwzqtDXUCPZW2i4QwAA22153k/viewform?c=0&w=1

You don't import a save from Dragon Age Origins or Dragon Age 2! Use the Keep! No not that kind

In the wake of the disaster in Kirkwall (and following some events in the novel Asunder which were from all accounts much more reasonable than anything having to do with Anders or Knight-Commander Meredith), the mages and templars are in an all-out war. Desperate to see an end to the strife and to bring order back to Thedas, the Divine, head of the Chantry, convenes a summit. It is to this summit that your player character has been sent. But then something terrible and calamitous happens and a great explosion kills everyone in the conclave but you, and you suddenly are infused with a strange “mark” in your left hand. This mark allows you to close demon-spawning rifts that are connected to the original explosion: the Breach. Because this special power makes you invaluable to saving the world, you are placed at the head of the newly formed Inquisition to stop this disaster before it can consume all of Thedas!

The Keep
Before you start your grand adventure with the Inquisitor, you may want to import your decisions from the previous two games. But how do you do that when you played the first game on the 360 and just bought the sequel on the Xbox One?

The answer is the Keep. Enter your Origin ID and it will look at the records from your old games and import data about your old playthroughs and characters. Eventually, you will come face to face with the Tapestry. There’s a lot of decisions to make here. Enjoy losing an hour or two of your life if you want to go through them all.

Didn't play the previous games or don't remember what you did or what some of the decisions mean (who the fuck is Deygan)? This video might help: 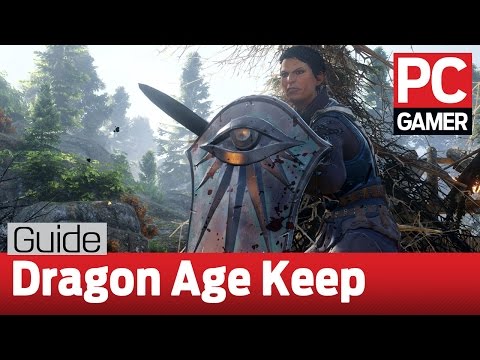 The Inquisitor
Be a male! Be a female! Have the game fuck up with a hilarious bug that screws up your gender!
http://www.ign.com/boards/threads/how-to-fix-dragon-age-inquisition-gender-bug.454299519/ Humans are the “safe” option, so to speak, because culturally they dominate Thedas. As a human inquisitor, you were born in the Free Marches (of Kirkwall infamy) as a noble of the Trevelyan family in Ostwick. Your family has always had close ties to the Chantry and the Circle, so you became part of the delegation to the summit. Humans receive an extra ability point at character creation. A dwarven inquisitor is a “surface” dwarf, with no caste or connection to life in Orzammar. Instead, you are a member of the Carta, an infamous criminal syndicate that (among other unsavory things) smuggles lyrium, a material mages need for channeling spells and which templars are often addicted to. Obviously it's important for business to know how things will play out at the summit, so you got roped in to spy on things. Dwarves have a 25% bonus to magic defense. Elves have long been persecuted in Thedas. Those that live in cities are kept in racially segregated ghettos, and those that live free are obliged to stay on the move. You are one of the latter, a Dalish, either a hunter or, if a mage, a First, the apprentice of the clan's Keeper. Your Keeper believes something is going to happen at the summit that will affect everyone in Thedas, even the elves, and so you have been sent to spy on the summit to make sure the clan is forewarned about events. Elves receive a 25% bonus to ranged defense, and Dalish heritage in particular makes them very politically inconvenient for the Chantry. Qunari are famous for their strict dedication to the religious philosophy of the Qun, but not all qunari fit the mold. You have never lived in Qunari lands and would be called Tal-Vashoth by any practicing qunari for not adhering to the Qun. As part of a mercenary company, you have been hired as muscle to help keep the peace between templars and mages that would be attending the summit. Qunari receive a +25% bonus to melee defense, and being giants with horns descended from a conquering empire with an inscrutable philosophy, they tend to freak people out.

Classes
The Big Three classes return, and each in turn has three specializations. You may pick one specialization, which can be unlocked through a quest that opens up at a certain point in the game. Specializations are not just for show this time, as they actually have story content tied to them. If you make your character a Templar, there may be some mages who feel strongly about that! Please note that the use of Qunari for these pictures is in no way intended as discrimination against lesser races. Mage: Blessed with the power of magic and cursed with the threat of demonic possession for having it, they can use the powers of Winter, Inferno, Spirit and Storm schools to combat their foes, and may choose to specialize as a Rift Mage, a Necromancer or a Knight Enchanter.
Rift Mages are new, but they have old favorites in their repertoire, like Stone Fist and Pull of the Abyss. They weaken and trap targets and can blanket the battlefield in a meteor swarm through Firestorm.
Necromancer is the "dark" path this time around, replacing the frankly inappropriate Blood Mage from the previous two games. They use fear effects and spirit damage to harry their targets and have access to Haste.
Knight Enchanter is this game's answer to the Arcane Warrior. Instead of wearing heavy armor, they have a built in light saber, slow effects, intangiblity and access to Resurgence, an AoE full heal. Warrior: Front line fighters, warriors can soak up more punishment than other classes with exclusive access to Guard, a form of temporary health only they can generate. They have access to the Weapon and Shield, Two-handed, Battlemaster and Vanguard skills as well as the Reaver, Templar and Champion specializations.
Reaver returns as the berserker specialization, doing self harm to increase its damage output and stealing health from targets. They can use Rampage to increase their attack speed and steal life with every hit.
Templar (not a very complete ability list at this point, sorry) is the anti-magic specialization for warriors. They can shut down hostile magic or resist a portion of elemental damage, and use Rally to boost the party and give them Guard, something non-warriors can't normally get.
Champion is all about area denial and being tough. They can block enemy movement through choke points, become temporarily immune to damage and use Counterstrike to taunt everything into attacking them, automatically countering every melee attack. Rogue: Whether it's striking from the shadows or from a distance, rogues are all about hitting hard and not getting hit back. They can use the Double Daggers, Archery, Subterfuge and Sabotage skill trees and specialize as Tempests, Assassins or Artificers.
Assassins make their returns as a stealth and burst damage specialization. They can auto-stealth after killing a target and deal extra damage to wounded targets while ignoring a portion of armor, and can use Cloak of Shadows to stealth the whole party.
Tempest is specialized around using alchemical potions to self-buff. They can give themselves a haste effect or set themselves on fire to knock back enemies. They can use Thousand Cuts to as much as 11400% their base damage to a target.
Artificers are about traps. They can lock down targets, pull them away from the crowd, use mines, and perhaps benefit from teamwork more than other rogue specs. They can use Hail of Arrows to duplicate their Archery effects (so you really want to spec these guys with Archery).
Companions
There are a lot of characters! A lot of companions! I’m purposely leaving them blank because you should really get to know them on your own if you haven’t.
Advisers and the War Table

New to Inquisition is the War Table, and with it Advisers. When you wish to progress the story or unlock objectives for exploration, you use the War Table and choose an Adviser who represents a particular approach to solving problems: Secrets, Forces or Connections. They will then carry out your will, sometimes completing activities off camera using a real-time cooldown, sometimes sending agents to perform activities like repairing bridges or digging up intelligence, or sometimes actually becoming involved in missions themselves. Some of them may even like-like you. :3 You can expand a base! You can make your own stuff! Be warned though, you have to collect a ton of shit in order to make things for everyone. I hope you like field gathering!

Influence and Power
As you complete activities in Dragon Age Inquisition, you earn gold and experience, but the Inquisition itself also improves by acquiring Power and Influence. Influence acts as experience to level up the inquisition and acquire Perks, and then Power is spent to accomplish activities and actually open new areas. Inquisition Perks are very important, especially Cullen's Forces perks that increase your potion limit and unlock/upgrade your Focus meter, which powers special “limit break” style skills tied to your specializations. Other perks can expand the amount of elixirs you bring into combat, improve the quality of your equipment, or unlock dialogue options. Pick your perks carefully, though, because there are about thirty and you can expect to have about ten or so by end-game.

Reviews, or “Is it a Good Game or Not?”
The game is fun! Shut the fuck up and play it!

DLC
Most of the DLC is good for the first four levels of the game right now. They’re still pretty! But you’re not missing much.
Red Lyrium Reapers:
A hot spot puzzle game or something for unlocking a free DLC weapons pack. Basically, watch four trailers twice each and click on green clouds (if you can see them--the video quality is kind of shit). Best attempted in Chrome--doesn't work in Internet Explorer and may crash Firefox. Remember to log in with your Origin account so you can claim your goodies.
Hot spots to click: Vivienne's video:
The Bust of Celene on the right
,
the guy's mask
,
Vivienne's staff while she's blocking shrapnel
; Iron Bull's video:
One of Bull's Chargers, specificially "Krem"
,
the guy Bull is strangling
,
the body of the giant after bull kills it
; Varric's video:
When the bar interior is seen from above, Cassandra is on the left
,
when the guy gets slapped, Solas is in the background
,
when Varric says "take a hint," click the crossbow
; Inquisitor's video: Just watch the bar down at the bottom of the video and when a green dot appears, click it and drag it to the frame that makes a weapon show up.
Zen Vulgarity on November 2014