When making comics you are going to come to realize that you are tackling a whole lot of different parts of art making all at once. You are going to be drawing things in perspective. You are going to be constructing figures, landscapes, and interiors. You are going to be writing. Much like animation, being a good comic artist requires you to be an actor, a script writer, and director. You will be making so many choices, it can be really overwhelming to get into, especially if you take on a very large project right away.

There's lots and lots of advice out there for new artists trying to get into comics, but the most important bullets are this:

-Actually Make Comics
There is so much more to it than just drawing the characters you think look cool standing around and posting that up on DA/Tumblr. Make comics, even super short ones.

-Learn To Draw
Yeah, sorry. No matter how abstract and indie and underground your comic is, you'll be better off if you learn to draw. Its not incredibly difficult to loosen up and get inspired. You can drink a beer and do some loose fun sketching at any point in your career. You cant drink a beer and draw a perfectly rendered figure without having ever worked at it. Remember, You don't study to learn to draw realistically, You study to learn how to draw anything and everything.

-Consider The Writing
Since this is the AC side of the forum, I assume you are here because you want to get your hands dirty and do the drawing. If the comic is going to be 100% you, you also need to start considering the writing aspect of doing this. For shorter, strip based work, it may feel like a smaller part of the problem. If you start getting into the longer narratives, you may run into the snag of being a shitty writer. That's okay. Its a skill that you can build just like any other.

You can also find a partner to work with, if that's something you are into. Working out partnerships can sometimes end in misery, and it can sometimes result in lifetime careers like it has for PA. Its going to come with its own set of challenges, which is something to consider.

Scott McCloud has written three books about comic making. If you've never encountered them, sit down in your local book store and at least read the first one. They are worth owning if you are serious about getting into comics, especially graphic novels. Its worth noting that "Reinventing Comics" is now pretty dated. A lot of the things in that book that was speculated upon has come to pass in one form or another, and the things that haven't just kinda make you depressed. 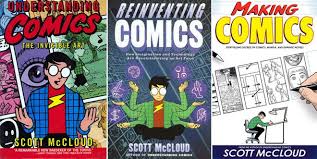 [Understanding Comics] [Making Comics] [Reinventing Comics]
I would argue that after his books, the next most important thing to do is begin reading more comics, but there are some other good books worth checking out:

Although drawing well in general is an asset to making comics, comics and animation require not just the ability to draw a character well from a technical perspective, but to be able to breathe life into the characters by having them act in a believable, interesting fashion.

While not a drawing book, this is a fundamental text on method acting. While a comic artist or animator may have no ambition to perform on a stage, having some acting knowledge to draw upon is helpful towards giving their drawn characters more depth and interest when put on a page.

An Actor Prepares by Constantin Stanislavsky

For writing and plot, I would consider picking up The wonderbook. It is geared towards novelists, but it deals with the hangups of creativity and the trials of writing and world building in a unique, and relevant way.

Forum Threads
We are a nerdy bunch, so comics get discussed all the time on the board. SE has a rotating webcomic thread, and GV has lots of threads about comics. Heres a few links for you to check out.