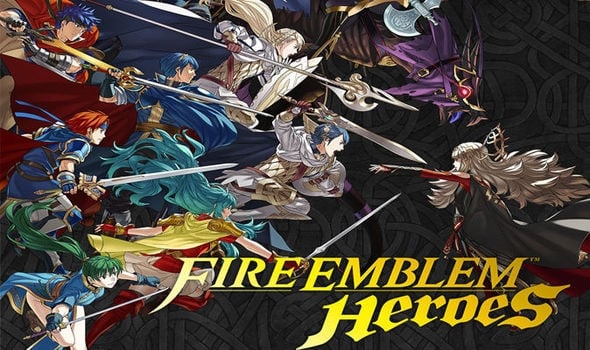 FE:H is a mobile version of FE for your Android or Apple devices. It pulls characters from every single FE game, along with some new characters exclusive to this game.

The game is basically a small, bite-sized FE game on your mobile device. Teams consist of only 4 units and battles take place on 8x6 grids. Battles are very fast paced, yet still require careful planning and strategy.

There's a lot of items and things to worry about in FE:H, so I'll do my best to distill things down into bite-sized portions. When you start the game, you'll do 3 prologue missions before getting to the main menu. Upon completing those missions, you'll be awarded 15 orbs. It's best to gather up 5 more orbs from Story missions and then do a summon (see Summoning below).

Your first summon is flexible. Basically, you summon your 5 heroes and decide whether to proceed with them or not. If you don't like what you got (perhaps you want a particular character), then you can choose to "reroll" your results by starting the game over. By starting over, you delete the entire app from your device, reinstall, download the updates, and compete the prologue missions all over again. This can take 5-10 minutes depending on how fast you are.

Once you get a team you like, it's time to start playing for real. 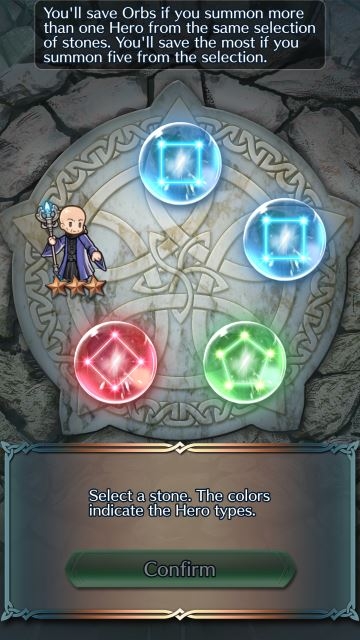 You acquire Heroes by summoning them via Orbs (an in-game currency). Heroes that are summoned are done so randomly. When you summon a hero, you're given 5 different colored circles to choose from. They can be red, blue, green, or gray. These colors indicate which type of hero can potentially be summoned.

So if you want a sword wielding character, say Lyn, you'll want to invest your orbs into red circles. Sadly, you don't get to choose which colors show up and might get stuck with a board with only a few colors (like x3 green, x2 gray). It sucks for sure, but it's how it is for now.

When you go summon a hero, it costs 5 orbs. After agreeing to summon the hero, you'll be presented with the 5 colored circle options. Tap on a circle to unlock a character. After you're done, you have the option to summon again using one of the remaining 4 circles. The downside is that you'll be limited to the color options available, but the upside is that you'll only pay 4 orbs instead of 5. You can do this until all 4 circles have been used, with the last circle costing only 3 orbs.

To maximize your summons, it's best to wait until you have 20 orbs, then summon 5 heroes at once. Again, you might want to back out after the first summon if you're looking for a particular character and the colors don't align.

Battles in FE:H are fast-paced and intuitive. That being said, they do require some strategy and foresight on your part. FE veterans should feel right at home and be able to jump into the game without problem. If you've never played FE before, I'll detail out some battle strategies for you here.

A lot of the battles in FE revolve around the Weapon Triangle, unit types, range, and terrain.

The Weapon Triangle is a system where certain types of weapons have advantages over others, dealing greater damage. Each weapon or spell is assigned a color; Red, Blue, Green, or Gray. It goes: Red > Green > Blue > Red with Gray being neutral to all. If possible, you'll want to attack with your weapon advantage and avoid your disadvantage. For example:

Anna is an Axe user, so her color is green. She deals bonus damage to Lance users (Blue) and takes more damage from Sword users (Red). On the other hand, Virion is a Bow user (Gray) and has no strengths or weaknesses against other weapon/color types.

In addition to the Weapon Triangle, each unit has a specified type. This is a far bigger deal in regular FE games, but FE:H basically boils down to troops, armored, mounted units, and flying units.

Be careful when engaging units in battle. If your flyer gets in range of a Bow user, he/she is likely to get seriously wounded or killed. Likewise with Armored units versus magic wielders.

Range is very important in FE. Units are either Melee (one square away) or Ranged (two squares away). Always check your attack ranges before committing to an attack. Ranged attackers deal damage from 2 squares away, meaning a Melee character will not counter attack. Conversely, if a Melee attacker attacks a Ranged opponent, they don't have to fear a counter attack. In all battles, the attacker swings first, then the defender counter attacks if possible.

Terrain can now play a big role in FE:H. Rivers and mountains can create choke points that your opponent has to funnel through. Placing a tough unit on a bridge (a Knight for example), allows you to attack enemies with your Ranged units safely. With a recent patch, new maps now contain "fortress" terrain tiles which boost your unit's defense/resistance by a percentage. Placing a unit on these tiles will decrease the amount of damage that they take.

There is a red "Danger Zone" button at the bottom of the battle screen. Tapping it will show all of the enemies combined attack ranges. Use this to position your units carefully, especially flyers. If you tap and hold on an enemy unit, their attack range appears as dark red. This is important to do on Bow users when you have a flyer out. Be careful though, the Danger Zone can change if you move units around or open pathways!

Here's our PA friend list. Add yourself today! Make sure to send out a greeting. Occasionally a hero might show up with a gift!