Kingdom Death is a grimdark fantasy campaign that mixes the setting of Dark Souls with the strategic base building of XCOM with the tactical arena combat of...?

Each player controls one of four characters that will journey through a campaign of surviving in this strange black metal album cover world. Waking up in a nightmare world with nothing but a loincloth and a rock, players go through an intro tutorial fight against a monster. Players will harvest the beast's body parts as crafting material to develop their settlement, begin a hunt for a new monster, fight a new monster, and repeat. As time passes, who knows what strange challenges will pop up? The goal is to survive to the campaign's end without your settlement's population falling to zero.

Disclaimer: this campaign will contain saucy artwork from the book. Steer clear if that's a deal breaker.

By default, the monster goes first.

Movement: The number of (non-diagonal)spaces you can move.
Speed: The number of attacks you get.
Accuracy: What you need to roll to hit.
Strength: (players only) Bonus to rolls to see if your hits penetrate the monster's toughness to wound it.
Damage: (monster only) How much damage each hit inflicts (player attacks will almost always only inflict one wound each)

Unless otherwise stated, all attacks have a range of 1 space.

Monster vs Players
Monster's turn draws a card from its AI deck to determine what it will do that turn.

A monster can move through players. Any player moved through will be knocked down. Ending movement on a player will inflict knockback 5 (move 5 spaces away, get knocked down).

Monster attacking players
1. Roll each attack to hit (accuracy or higher)
2. Roll location die for each hit.
3. Apply points of damage one at a time to each location.
4. Any players who was knocked down in a previous turn now stands up.

Each point of damage goes down the line. Deduct any armor points at the location until 0. Then inflict a light wound (no effect) at that location. Then a heavy wound, which knocks the player down (cannot act until the end of the next monster turn). Once those are gone, each attack at that location forces you to roll once (regardless of damage) on the severe injury table. Severe injuries are where you can get permanent injuries or death. Most will cause bleeding points. Death occurs at 5 bleeding points. Bleeding points are only healed by cards that specifically say so; they are not healed automatically between battles.

(note: the head has no light injury box. The first damage goes straight to heavy wound)

Ex. A monster hits with a 2 damage attack against a player location with 1 armor.

The first hit inflicts 2 damage. The first damage reduces the armor to 0, then the second damage inflicts a light injury.
The next hit's 2 damage points would inflict a heavy injury (knocking the player down) then force them to roll on the severe injury table.
Further hits would force a severe injury roll (one roll each attack, regardless of damage)

Players have a separate "Brain Damage" to reflect psychological state. Some monster have Intimidate attacks which will inflict brain damage. The first damage inflicts a light injury to no effect. After that, each brain damage forces the player to roll on the Brain Trauma table, essentially severe injuries for your mental state.

Players can accumulate points of Insanity which act exactly like armor points against Brain Damage. At 3 or more insanity points, the player is considered Insane which can affect some later story events.


Players vs Monster
On their turn, the players each get one movement action (move spaces up to your movement) and one activation action (usually attack). These are marked by an arrow and lightning bolt. Players cannot move through the monster or other players.

Players attacking monster
1. Roll to hit (accuracy or higher)
2. Draw 1 "Hit Location" card per hit.
3. Choose the order of locations you will roll to wound.
4. Roll the monster's toughness or higher to wound (apply any strength bonus to this roll (a 10 inflicts a critical hit).
5. Remove 1 monster AI card per wound inflicted.
6. (Critical hits) Follow the critical hit text on the hit location card.

Survival points
Points which allow survivors to perform special actions. Each survivor starts with 1 (and a max of 1). At first, the only special action is dodge, which you can spend to cause any monster attack to miss (after it rolls to hit). Survival points are only recovered when instructed.

First battle notes:
-The White Lion's toughness is 6+ (player hits must roll 6 or more to wound)
-7 cards in the AI deck
-Players are equipped with only a loincloth (1 armor on the waist) and a "Founding stone" (rock) for a weapon.

Founding stone:
2 Speed (# of attacks)
7+ accuracy (roll 7 or more to hit)
1 strength (+1 to wound rolls)
Special: May sling it at monster at any range to inflict 1 automatic critical hit. Discard after.

All player have access to "Fist & Tooth" (bare handed) attack.
2 Speed
8+ accuracy
0 strength (no bonus to wound rolls)
+1 Luck (critical hit on 9+ when rolling to wound)

Sample picture of player sheet to give a better idea.

There's a lot of stats, but all the ones I didn't mention start out at zero and don't come into play to start. 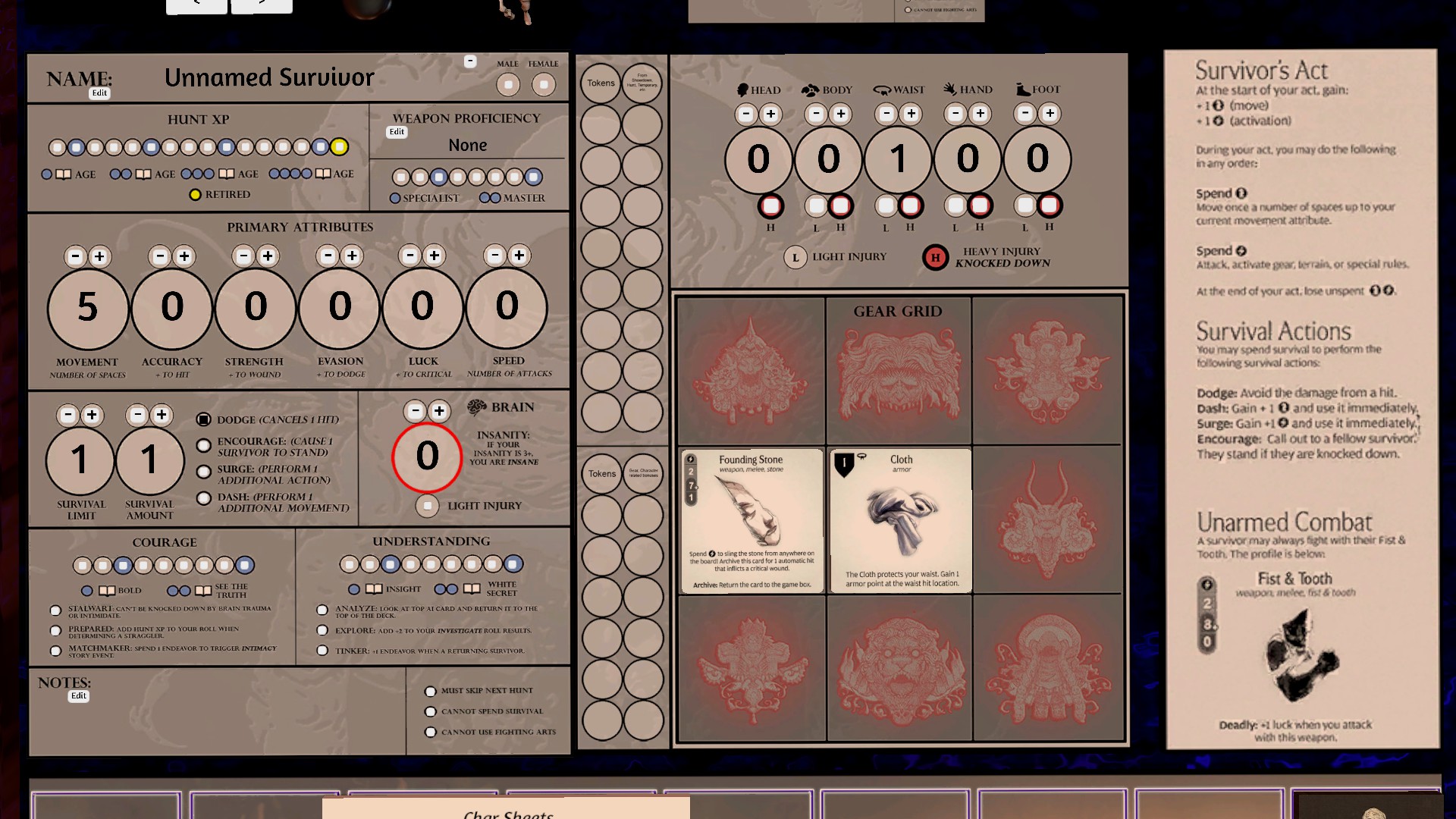