Before the latest crop of cinematic superhero movies, the artistic highlights of comicbook movies were weird underground successes like The Crow and The Mask. Of course, there was a long, weird road from 1989's comic book The Crow and the neuvo-classic film starring the late, great Brandon Lee. I won't really go into the plot, because you know the plot. Or you can pretty much guess the plot. It's a dead guy rising from the grave for vengeance. Yes, there's a cat and a katana and a ballet sequence, but really, you know how this is going to go. So let's look at the other stuff. 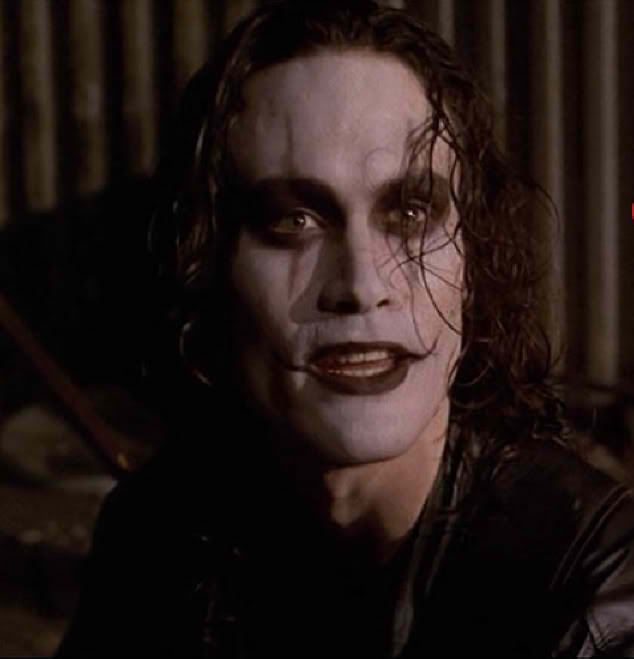 The Heath Ledger of an earlier generation for y'all millennials.

I won't say that James O'Barr's signature work defined a generation or any of that rot - but it struck a nerve. I hesitate to say exactly why. Part of it was the art - which was, frankly, a bit raw. It wasn't the clean lines from your regular 4-color superhero book, it wasn't even the kind of cross-hatching you'd see in Conan the Barbarian. It was dark - literally, chiaroscuro, a lot of shadows, a lot of panels where pale faces floated in a sea of black, a lot of duotone. The style could shift, page to page; the less artsy stuff sometimes looked clumsy, stilted, but the softer edges of the dreamier scenes came across much better. The layout was dynamic, but not inspired; script-guys like Alan Moore and Warren Ellis that think in panel-beats work deliberately on effects and presentation, art guys like Howard Chaykin or John Buscema know how to set a scene, do interesting things with panels. O'Barr - and he was still fairly young when he did this, work started in '81 when he was only 21 or so - didn't have a lot of experience, which may explain some of the chaotic nature of the art, the layout, the level of skill. Yet at the same time, that just makes it feel more real.

Another part is the style. It's a punk aesthetic, without the punk attitude. It's a vigilante story, a vengeance story, but the visual cues are the kind of things that reach into a twelve-year-old's spine and start tweaking important signals to the brain. Guns, drugs, scary mime/clown makeup, religious iconography, shell cases tied into the hair, cutting, leather jackets, katanas, naked chicks, big 80s hair, black birds, cats, a horse tangled in barb wire... it is, more even than the story - because the comic is a lot darker than the film, as far as the plot goes - the artistic sensibilities that help define the crow. It's like Dark City, where the sun never rises. The motivations are simple and elegant to any readers in their teens; it's a fantasy, a wish-fulfillment. You were young, you were in love, and you died. So you're back. Not to make things right - because you can't make things right. Just for payback.

At the same time, it's not just about vengeance. The dead man that rises from the grave for revenge - that's classic horror story material. Walking corpses, seeking some ironic fulfillment from beyond the grave. But Eric...the thing about Eric is he doesn't seem filled with hate. He doesn't emote VENGEANCE like the Punisher does. He remembers good things, terrible things. He's in pain, but he's not mindless in his pain; he's dedicated, but it's not an obsession as much as he's going through the motions. He's not happy about what he does, it's hard to say that he's even satisfied. He kills a bunch of people that deserve it, and he looks cool doing it. But what does that earn him? No salvation, certainly. Perhaps not even satisfaction. Writing-wise, this was gothic-punk back in the antediluvian days before Hot Topic made a commodity of it. All The Cure and Bauhaus playing "Bela Lugosi's Dead," Sisters of Mercy and Concrete Blonde, and Anne Rice novels. It was what passed for erudite when you were a teenager - references to Kurosawa films and bad Nietzsche quotations, song lyrics and poetry, impromptu French and German titles, snippets of Rimbaud and Voltaire... Like the art, it's eclectic. Bits and pieces of other writers together in a collage, spaced out by the art, by O'Barr finding the own words to express his grief, to deal with the emotions behind his girlfriend's death by drunk driver.

Shelly is an interesting character from that perspective. She's the woman-on-a-pedestal. The thing that drives the Crow. But why didn't she come back for him? Survivor's guilt, of course. Author's dirty reflection. James O'Barr survived, so we're dealing with his story of loss - but where does that leave Shelly in the comic? About where it leaves the Punisher's wife. Or Catwoman in The Dark Knight Returns. I don't think James O'Barr was intending any sort of woman-in-a-refrigerator deal with Shelly...I don't think he was thinking about the comic or script in those terms. It was unfair she died, absolutely, and her corpse defiled (yeah, no surprise that didn't make it into a major motion picture), but I seriously don't think her characterization went into the story much. She's perfect, and she's dead. Is she perfect in Eric's memories because she's dead? Is he just blanking out about all the little arguments, her annoying habits, the little flaws, because he's idolizing her? Ah, but maybe I'm just overthinking it. I dunno. What I do know is, The Crow is the kind of property that James O'Barr found success in, and has sort of continued on. Four films, a bunch of comic series, that godawful television show, novel tie-ins... He's done some other comics, but nothing's really "clicked" on the same level as The Crow. Which it must be nice, to have created this character that's successful enough to spawn continual attention from comics and Hollywood (I hope at least he's got a decent amount of dosh), but it also must be sad, too. To be so defined, almost pigeonholed, by something he created so early in his career.

Coming back on this - and I haven't read The Crow in maybe ten years before tonight - I see what younger me saw in it. I also see its limitations. If I had picked this up fresh today, would I still have twigged to it as a "classic" on the lines of what it became? Is it really any better than any of the indie comics that fill up the shelves right now? I dunno. I can't really separate it from its era. It's like the early Teenage Mutant Ninja Turtles, or Gnatrat, or The 'Nam; you can enjoy it for what it is, but you don't really appreciate it without grokking some of the context of the era. When superhero comics were largely bloodless, when drugs were A Special Issue, prostitution and little kids never on the same page (unless you were Alan Moore and Dave Gibbons)...by the '80s, underground comix as they were in the 60s and 70s were largely dead, and the "underground" indie comix were incredibly primitive. Just, amazing. So back then, this was impressive. This was up there with The Last Temptation (which, I just looked up, didn't come out until '94. Oh well.) as far as definitive gothic-punk comics. Also, I can't think of another comic which basically gave birth to a roleplaying supplement (The Risen, by White Wolf), at least until somebody did Men in Black.

So, those are my thoughts on it. What are yours?
The Unpublishable - Original fiction blog, updates Fridays
Sex & the Cthulhu Mythos