[Shin Megami Tensei/Persona]: the Strange Journey is underway. Suit up!

Death's vastness holds no peace. So take death into your own hands.

Beware ye who enter, for here there be demons. 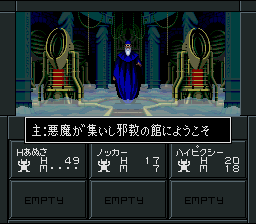 As long as console RPGs have existed, Japan has been dominated by the likes of Dragon Quest and Final Fantasy. But somewhere, just outside of the mainstream, lies the Megami Tensei series. Filled with dark stories about the nature of reality, technology, religion and humanity, the Megami Tensei storylines have been a bit too obtuse, and the gameplay a little bit too hardcore, to really attract the typical RPG fan. But the series - mostly relegated to Japan until recently - has created a cult following known as Megatennists, who devote themselves to one of video gaming's most expansive series.

The Shin Megami Tensei games, or SMT for short, have a long history stretching way back to the Famicom days. Most of those never came out here.


But a lot of awesome ones did.

In shameless duplication of the Final Fantasy Thread, I'll likely be picking out some of the choice SMT games from both sides of the globe and highlighting them in the near future.

Most of them are extremely rare, but almost all are worth having.


Until then, feel free to discuss some recent developments: Or has gone. We're waiting for news on the US version. I give it a few months, tops.

The interface has been slightly(okay, drastically) modified for P3P. Instead of moving around freely, most everything done outside of Tartarus will be done with menus.

Also, P3F will include a shiny pink interface, as opposed to P3M's dominate blue.

Whether or not the changes are to your liking, the new OP is all kinds of hot:


Going back to basics, this is the first 'mainline'(re: not a sidestory) SMT game made since Nocturne, which was considered the third.

Massive first person dungeons, and lots of demons to befriend and recruit.

It's basically SMT: Etrian Odyssey, even using the map engine of that other Atlus series(but with automap, unfortunately).

Everyone's favorite composer, Shoji Meguro, is doing the music for this too, and it seems to be decidedly darker than usual, even for him:

Produced and designed by series mainstay designer Kazuma Kaneko, Strange Journey promises to be an exploration of humanity's place in the universe as they try to protect the antarctic from demons and cryptic blonde women who are most certainly not fallen angels and always worthy of your trust.

Dream of butterfly, or is life a dream?


The classic that started it all. Old-school dungeon crawls and high school drama. If you don't like lots of random battles and huge maps, this might not be for you. The story is still enjoyable if nothing else.

The art design leaves something to be desired, but it's certainly unique, and has a much better story than expected.

View or face execution.
It seems the plans with us were just on the level of buying a plane ticket.

The whole concert is on youtube. Make with the watching, it's wonderful.

So You Want To Be A Devil Buster?

Who says Messians are all bad?

Though to be fair, SMT's God is kind of a jerk.

Yes. Yes I would.


The Demons of the Goetia have had enough, and they're going to take what's theirs.

Or at least pose dramatically.

Been there, slain that.

Got more? Post it! Could use some P4 comedy. Where's that daisy stuff?